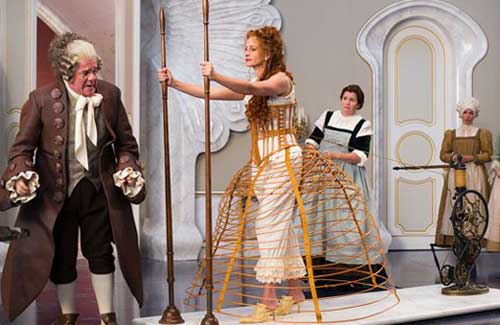 At last, someone has created a device to thrash the ugly off Julia Roberts!

Snow Shite and the Repression Dwarfs.

Snow White with a unibrow!

A retelling of Snow White from the wicked queen’s point of view. Which means MIRROR MIRROR makes as much sense as every other point of view – none.

Unnecessary special effects (that are not that special when overused to this extent), intentionally juvenile performances and irritating editing make this colorful, campy adventure as teeth-grating as biting into a poisoned apple. Writers Marc Klein, Jason Keller and Melisa Wallack, and director Tarsem Singh, have worked hard on constructing a new-ish story, with good foreshadowing, plot points and payoffs. But trying to make the exercise more tolerable by having every actor adopt a modern comedic vernacular works about as well as claiming the Queen is supposed to be beautiful and then casting Julia Roberts in the role.

The Queen gains control of the kingdom via dark magic, her king riding off to battle some ambiguous “evil” and never returning. Her stepdaughter Snow White (Lily Collins, who must unfortunately share a dressing room with her unibrow), is apparently an annoying 18-year-old with nothing to do about the palace except get underfoot.

Queen Roberts cannot put her finger on why Snow annoys her so: “After all, you’ve done nothing to me. Caused no problems. And yet… there is something about you that’s so incredibly… irritating. I don’t know what it is. The slumped shoulders, the hair, that voice. Mmm…” Ditto to Julia Roberts. I would ask her whether she’s looked in the mirror lately, but I know the answer to that one.

Aptly named sexyboy Armie Hammer is rich Prince Alcott, whom both Snow and Queen would like to bite into, Queen because the kingdom is broke and needs a bailout by marrying into money, and Snow because she’s a virgin succumbing to the hormones cascading through her vagina. Don’t worry parents, the movie is aimed at kids, so doesn’t use any bad words like “bailout.” 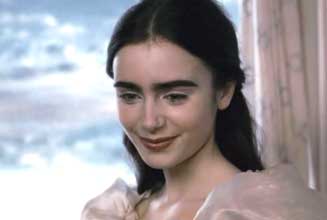 Please, Ms. White, free the caterpillar and let it live free on a leaf somewhere!

It seems like a naked chest and a pretty face on a man affect women as curiously as a naked chest and a pretty face on a woman affects men, if the brain-loosening reactions of Queen and Snow are any indication every time Armie Hammer walks around with his shirt off. Of all the principals (including Nathan Lane as Queen’s liege Brighton, Mare Winningham as the Baker and a cameo by Sean Bean as King), Hammer is the only person to really pull off his cheesy performance, never better illustrated as when he decides to pursue some bandits, striding out of the room with jaw squared, proclaiming, “Justice must prevail!”

We meet the dwarfs (led by little people Jordan Prentice, Joe Gnoffo and Danny Woodburn) as they plunder travelers in the forest, which they do while wearing masks and using covered stilts to look like giants. (Strangely enough, when they’re on stilts, their arms are regular length, making them look like the stuntmen on stilts that they really are…oops!…)

Queen’s vaunted magic mirror doesn’t have much bearing on this story, except to warn Queen that using magic has its price; that price, I presume, has something to do with being in a movie almost unwatchable.

When Snow expresses interest in Prince, Queen orders Brighton to kill her in the forest. Which he doesn’t. Abandoned Snow meets the Dwarfs and a training montage ensues, making her a warrior in five minutes. Now she’s ready to save the kingdom at the 80-minute mark, leaving enough time to tie up loose ends with peripheral characters and still make it under the 100-minute mark so that the studio can profit from maximum amount of screenings.

One of the dwarfs, Half Pint (Mark Povinelli), is infatuated with Snow. But every time he lets his heart show, “I need you– I mean, ‘we’ need you,” it’s a big gag. Because it’s just too outlandish for a dwarf to harbor real feelings for a full-sized woman, right? Especially when everyone – audience and characters alike – takes it for granted she’s going to back dat ass up on the naked chest with the pretty face. The storytellers keep pounding Half Pint’s tragedy with numerous comments from him, but no shrift is given to the fact that his feelings might be – dare we? – true love. Snow doesn’t even look twice at him, infantilizing him as egregiously as everyone else who insults him outwardly. In THE HUNGER GAMES, when Doofus declares his infatuation with Katniss, suddenly she’s all over him even though she had another boyfriend waiting! Not so when you’re a dwarf – I mean, his heart couldn’t possibly be overflowing with love-ache every time she walks by with that glamorous unibrow, at least, not like the love-ache in a real person’s heart. And by ‘real’ we mean normal-sized, right? Just repress it to the grave and keep your mouth shut, little man…

Sean Bean brings a regality to the last few minutes that doesn’t quite save the movie. And the story is neatly concluded with Queen being defeated on the point of an apple, and everyone cheering…

…Then Indian director Tarsem Dhandwar Singh does something crazier than any of the plot points in the film – he poisons his own apple by making the cast participate in an Indian Bollywood dance number during the outro credits, ruining whatever tone he was fitfully trying to create for the whole movie! You need to get to the level of SLUMDOG MILLIONAIRE before you’re allowed to make me feel this level of dirty. Don’t get me wrong, those numbers can be dynamic and exciting in the right tonal setting, but to try and slip one into Western cinema when no one is looking… well, I guess he’s got a point; no one saw this film…