Highway to the Ambivalent Zone.

Taking his cues from every reputable pharm corporation, Ambrose wants to spread the Chimera virus in order to sell the cure, called Bellerophon, buying enough stocks in the cure to make him a billionaire. (The names from Greek myth serve no purpose, merely adding a patina of credibility to an otherwise prosaic tale of basic human duplicity and greed.)

MISSION IMPOSSIBLE 2 is your typical John Woo bullet-fest with Pretty Orange Explosions. The plot is suitably overwhelming enough for an Impossible Missions guy, so when Hunt complains to his boss (an impossibly detached Anthony Hopkins) that it’s going to be difficult stopping Ambrose, Hopkins replies, “It’s not called ‘Mission: Difficult,’ it’s ‘Mission: Impossible’ – ‘difficult’ should be a walk in the park.”

Rade Sherbedgia is a scientist who smuggles the Chimera virus from America to Australia by injecting himself with it. To receive the antidote, “I must arrive at my destination within 20 hours of departure.” Well, he’d better not fly Delta Airlines then.

Brendan Gleeson is a businessman who cuts dirty deals with Ambrose behind the scientist’s back. And uh-oh! — Ambrose has brought not only his ambiguously fey right-hand liege Richard Roxburgh, but his coterie of Euro bad guys who can only get killed in slow motion. 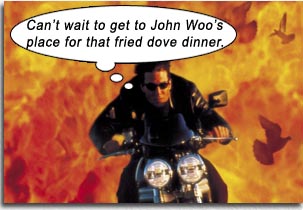 Filmed on location around Sydney, Australia, Hunt recruits dependable Ving Rhames and Aussie John Polson, as well as the unappealing, smug Thandie Newton as Nyah (with her A-cups crushed together to create B-cleavage), as infiltrator into Ambrose’s pants – I mean, plans.

And the film exposes its fatal flaw. You see, they’re trying to sell us on Hunt and Nyah “falling in love” after just one night of naked smugness. The Impossible Mission Plan calls for Nyah – who is Ambrose’s ex-girlfriend – to infiltrate Ambrose’s lair by seducing him into taking her back. And Mr. Kidman gets all pouty. And this is because… ?

Now it’s not the fact Nyah is prostituting herself for the Impossible Mission guys that irks me; it’s that the filmmakers are saying Hunt and Nyah – two world-weary, guarded, inshape, cynical gangsters – would have “emotions” for each other after one night of sexual chocolate. They want us to believe Hunt is sooooo enamored with this woman, that he is actually emotionally suffering when she walks into Ambrose’s den. Not suffering over her safety, or over the safety of the free world, but suffering over her soon-to-be ravaged poonanny, which he just recently shredded. And of course, when Nyah undresses for Ambrose, we have to see an unimpeded shot of her pained face, so we can be certain she’s not enjoying it either (although I’ve seen women use that same expression during o-face). In the R-rated world of killing millions for profit, it’s still PG-13 morality when it comes to sharing poonanny.

When Nyah injects herself with the Chimera poison to stop Ambrose from possessing it, the plot becomes Hunt trying to get to her with the antidote and all other evil dealings are shunted to the background. So all the “good” Hunt is doing in trying to stop Ambrose is for THE WRONG REASON. It’s like Superman spinning the Earth backwards in SUPERMAN – he didn’t do it to reset the mass destruction to the world, he did it to revive Lois Lane’s Panty. So too with Hunt. Whereas he started the film isolated (in an extreme mountain-climbing sequence that is vertiginous heart-in-throat), he ends as a romantic whippee. 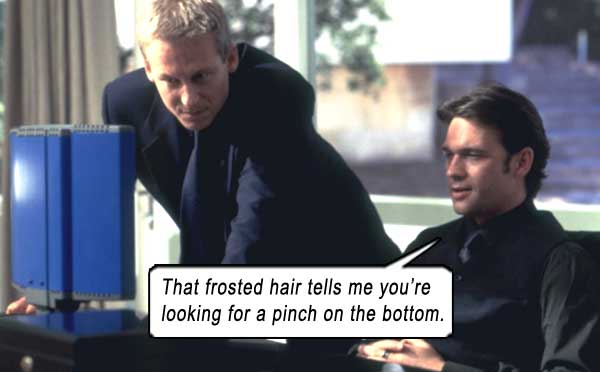 Tom Cruise flounces through MI2 like a superhero. I guess you have to be pretty proficient in many disciplines to be an Impossible Missions agent, but as the film wears on and the stunts and hand-to-hand combat and bullet-fests and gadgetry and Pretty Orange Explosions get bigger and badder, Ethan Hunt becomes so all-powerful that our patience with his proficiency wears thin. Film opens with Cruise himself scaling rock overhangs with no ropes or pitons, primal fear of falling dizzying us; then he’s hang-gliding, now he’s stunt-driving, now he’s doing the wire-suspension gag again, jumping out of a skyscraper, aikido, crack shot, samurai, pilot… By the time he is hand-braking a motorbike and pivoting around on the front wheel and shooting behind him while looking in the mirror to aim, we’re wondering whether anything can kill this guy short of kryptonite.

Hunt’s only shortcoming is that he can’t kill anyone unless it’s in slow motion, or unless he’s framed to look like the Second Coming of Christ Almighty. Or unless there are doves. John Woo just loves to pretend his movies are more art than they really are. Then they fall into juvenile lapses of concentration: the scene with Brendan Gleeson in a hospital bed spilling his guts in such stunted Screenwriting Exposition that it looks like a comedy satire on Screenwriting Exposition.

MISSION IMPOSSIBLE 2 will leave the action crowd sated, but lacks the darkness and steady hand of Brian De Palma’s MISSION IMPOSSIBLE (1996). John Woo does to the franchise what Joel Schumacher did to Tim Burton’s BATMAN franchise – gay it up. And Tom Cruise is only helping.