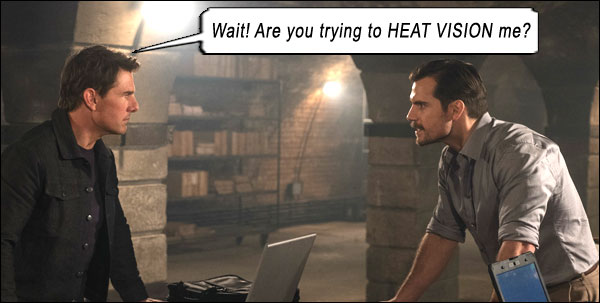 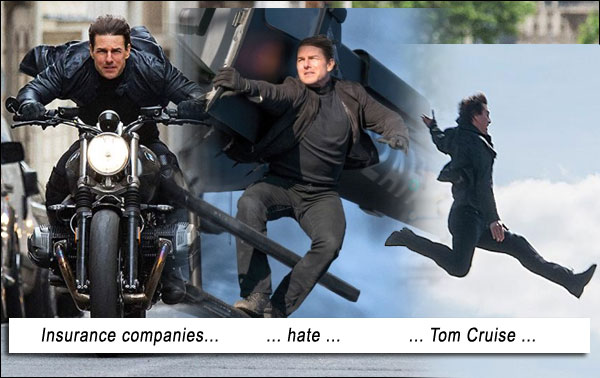 People Shooting Other People from Offscreen.
(ALTERNATE TITLE: Adventures Of The World’s Most Expensive Stuntman.)

As it happens, I did learn something from the TOM CRUISE STUNTMAN EPK. I learned that if someone gets the drop on you and aims a gun at you, if you’ve trained hard enough, someone will shoot them from offscreen. Honestly, this happens so many times, I’m sure it’s connected to how savagely you can shave your torso. 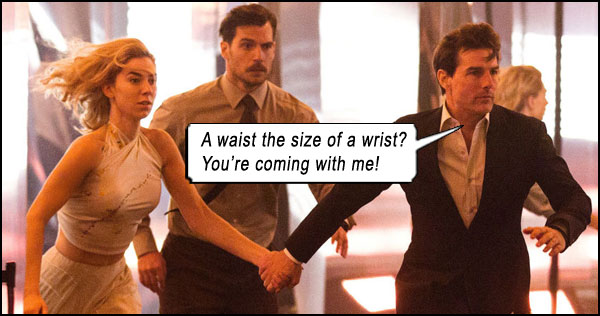 In the TOM CRUISE STUNTMAN EPK, Tom reprises his role as Ethan Hunt Superspy, tasked to retrieve 3 McGuffins—I mean, 3 globes of plutonium from anarchists who call themselves The Apostles, before they can use the globes to blow up cities around the globe. He fails. Which results in lots of talking to cover loopholes in the plot that some YouTuber in his mom’s basement will complain about. Now Ethan’s boss, Dumbo Donald impersonator Alec Baldwin, tells Ethan he’s off the case. And Ethan goes rogue to retrieve the globes. And Superman helps him.

Let me sidetrack for a moment. Even though the 5th MISSION: IMPOSSIBLE film is the only one subtitled ROGUE NATION, Ethan Hunt goes rogue in every single MISSION: IMPOSSIBLE film except the 2nd one. Which means: his own “Impossible Missions Force” is not paying him. How can this guy afford to eat, or stay at those posh European hotels? So where does he get the money for his fancy skydiving equipment and body-shaving apparatus and those rubber masks that continue to fool everyone? Onward… 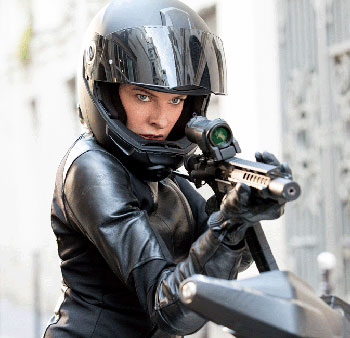 Ethan’s crew go rogue with him, because they don’t enjoy getting a paycheck either. Ving Rhames is street muscle hacker Luther, Simon Pegg is complainer damsel in distress Benji, and Rebecca Ferguson is double-triple agent Ilsa, who follows Ethan around Europe not having sex with him. Undercover triple-duple agent is August Walker, played by Henry Cavill – and there it is! – The Mustache Heard ‘Round The World! Not only a killer ‘stache – but formidable Euro-bad-guy Three-Day Growth as well! This guy has balls as big as Batman!

Tom Cruise is three years older than me. And how come I can’t hang from a helicopter? So whipcord and derring-do, where does he find the get-up-and-go? Is it energy drinks? Steroids? Xenu?

The snide bad guy from ROGUE NATION is back, Solomon Lane (Sean Harris), and even though handcuffed for the whole movie, still manages to annoy Ethan into doing stunts in Europe. Michelle Monaghan returns (last seen in MISSION: IMPOSSIBLE IV) as Ethan’s estranged-yet-pining wife, now married to someone else (Wes Bentley), because Ethan spent too much time doing stunts in Europe.

A clichéd cliffhanger final sequence finds three McGuffins—I mean, plutonium globes, with Roger Ebert’s Courtesy Red Digital Readouts, all counting down from 15 minutes to annihilation, while Luther tweezes wires, Benji the damsel in distress is rescued by Ilsa the ass-kicking damsel, August Walker – after outing himself as a bad guy – suddenly has Bad Guy Aim, and Ethan literally hangs from a cliff.