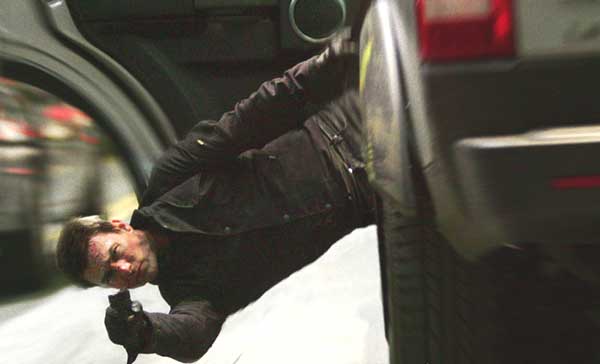 Please remain seated with your safety belt on until the vehicle has come to a complete stop.

Running. If you like running, you’ll love MISSION: IMPOSSIBLE III. Because that’s all that Tom Cruise seems to be doing in it.

Besides running, Cruise is also being IMF espionage agent Ethan Hunt. (When he tells someone that IMF stands for “Impossible Missions Force,” we realize how ridiculous it sounds, and why everybody’s trying to kill him). In this outing, IMF [snigger] is trying to recover a device called the Rabbit’s Foot (ha! It might as well be called the McGuffin’s Foot) from arms dealer Owen Davian (Philip Seymour Hoffman, oozing sinister callousness).

Ethan uses a Davian mask to infiltrate and kidnap Davian. I’m still amazed at those lifelike rubber masks that the M:I team utilize – y’see, when Ethan puts on a Davian mask, he somehow gains the extra pudding bear pounds as well. And all he needs to do to lose the weight is to take off the mask!

Since we left him in Australia with Thandie Newton’s poonanny in MISSION: IMPOSSIBLE 2 (2002), Ethan has retired and is playing patticake with Michelle Monaghan‘s poonanny (his nurse wife Julia), who doesn’t know he’s a secret agent and – like every woman in movies unknowingly married to secret agents – blindly falls for his stories of working late at the office or going away for two days to a sales convention.

Agent Musgrave (Billy Crudup) snaps Ethan out of his ‘burb daze by sending him on a rescue mission for an agent he trained (Keri Russell). Russell is blistering hot as she and Ethan shoot their way out of the clutches of Davian’s thugs who can’t aim (with a small appearance by Eddie Marsan as a henchman). Then a disturbing conclusion to this failed rescue – as a brain-addling device implanted in Russell’s head is detonated and her eyes suddenly skew in different directions. It’s a great death scene for its gruesome impact.

They show us the consequences of this explosive implant so that when it ends up in Ethan’s head in the finale, we know the devastating results he’s trying to avoid. 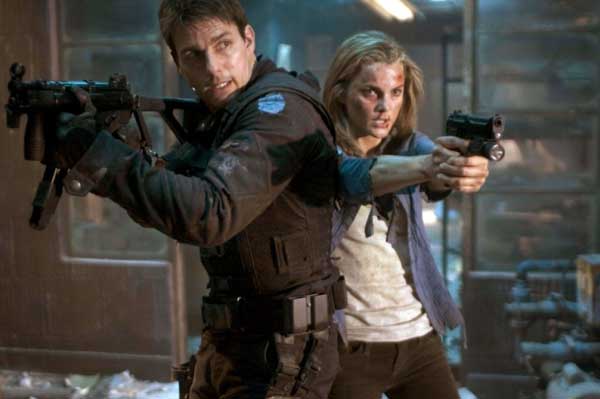 You had me at hot chicks with guns.
(And Keri Russell is pretty hot too.)

Ethan’s team consists of wisecracking Luther (Ving Rhames, in his third outing as Tom’s bottom bitch), Declan (Jonathan Rhys Meyers, who doesn’t seem necessary in this generic B-role), Zhen Lei (Maggie Q, who only gets to show off her urgent spinner bod once, in a salubrious dress with peekaboo thigh), and a new helper bear, Benji Dunn (Simon Pegg, cubicle nerd, team-adjacent). Watch for Aaron Paul as Julia’s brother, just a couple of years before BREAKING BAD would make him a household meth name. Laurence Fishburne is IMF director Brassel, the cliché boss whose nerves Ethan keeps getting on.

This slick J.J. Abrams-directed actioner delivers on its extravagant promises, with European locations (as well as California, the Vatican, Germany, China), startling action, impossible stunts (the “swinging-between-two-skyscrapers” gag, the “drone-attack-on-the-bridge” gag), Pretty Orange Explosions, the cliché of chasing a rolling thing through traffic, that now-famous cable gag with Cruise descending spread-eagled and stopping just short of the ground, plot turns that surprise us, and Lalo Schifrin’s magnificent theme (extrapolated by Michael Giacchino) bashing us in the temples passim.

And lots of running.