Cruisin’ for a Contusion.

Tom Cruise is espionage agent Ethan Hunt, in the big screen reboot of the 1966 television series, MISSION: IMPOSSIBLE, who has to go rogue against his own agency to weed out a mole. But the agency thinks it’s him! (I don’t blame them – with that insufferable smirk and that mole-ish snout of his.)

Nonetheless, man-toy Cruise fires up the rocket sauce in this edge-of-the-seat, seat-of-the-pants heist thriller. And twenty years after its release, this film still holds up as one of the best, if not the best MISSION: IMPOSSIBLE movie. 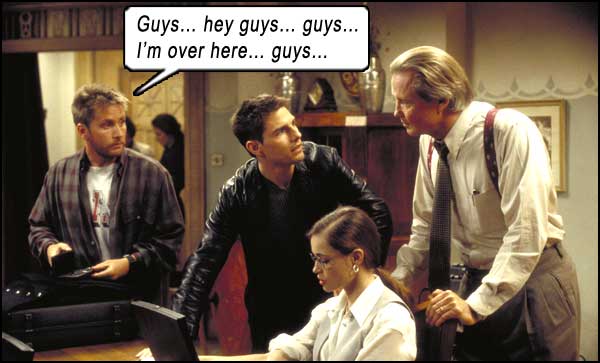 Whatever makes MISSION so good, Tom Cruise (also in his first role as producer, with his new company, Cruise/Wagner Productions) makes up for his obnoxious smirk by performing all his breath-stopping stunts himself. Was it here we first discovered that Cruise had a predilection for risking his own neck? He deferred his usual gigantic acting fee to be able to insure that smug pretty face against all the stunts in this actioner, none better than the explosive one we see in that magnificent trailer – Cruise being blown off a helicopter, careening towards the camera and landing with a thud so hard, it rattles our coccyx. It’s every bit as sensational as the hype.

During the first nail-biting mission (where we see one of MISSION: IMPOSSIBLE’s great conceits – those lifelike rubber facemasks), Ethan’s full team is killed mysteriously, and sole survivor Ethan is accused of being the killer mole by agency head Kittridge (Henry Czerny). On the run from his own agency, Ethan goes deep rogue, with other “disavowed” agents – Krieger and Luther – to find the real mole.

The plot revolves around a NOC list (Non-Official Cover) of all IMF (Impossible Mission Force) agents. And who’s got it. And who wants it. Ethan makes a deal with a saucy Vanessa Redgrave (as a mob boss) to offer him protection from IMF, before infiltrating CIA headquarters to steal a copy of the NOC for her.

Thus, the now-infamous, iconic visual of Tom Cruise hanging from suspension cables above a lighted, touch-sensitive floor. In a stunt stolen from Jules Dassin’s 1964 film, TOPKAPI (with Maximilian Schell on the wire), De Palma and Cruise ratchet the suspense to mind-bending proportions with updated technology, judicious editing and dangling man-toy. Much like Travolta’s iconic scoliosis pose represents disco, this visual – of a person suspended by hips, arms and legs outstretched – has become synonymous with “spy,” satirized and spoofed in countless media since then. 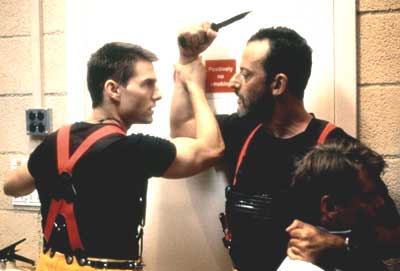 The Knife-Dance, just before it gets REALLY sexy.

Holding Ethan from above is Krieger, in an air shaft– okay, forget the fact that, like every impregnable or inescapable building, the CIA building – the most secure edifice in the world – also has air shafts big enough for a man to crawl through. These are the face-palms for every small thing the movie gets wrong, almost canceling out every big thing it gets right. Now while Krieger struggles to hold Ethan aloft, a rat comes shuffling towards him in the air shaft– Waitaminute! This is THE most secure room in CIA headquarters – so clean, even a 2-degree change in room temperature or a five-decibel rise in noise sets off alarms – and they’ve got vermin problems? And is it a rat’s natural instinct to walk towards a human?

Also, while we’re in this ultra-secure, mega-protected, maxi-douche clean room, take a look at that “chair” that the computer tech (Rolf Saxon) pulls out from beneath the computer. He has to straddle it like a saddle. Just getting in an out of that chair looks so… cumbersome… How long can you sit in that saddle position and work on a computer?

Soon, the computer Tech will cross the line into computer Nerd – when he takes a seat in the cafeteria and pulls out a newspaper, and a smokin’ hot hard-9 sidles in next to him (Emmanuelle Beart, who spikes his coffee). She invades his personal space and he doesn’t even give her the Askew Glance (that surreptitious eye-rape that man-kind has perfected since the time of skirts made from leopard skins)! I can believe a guy can hold another man’s weight on a pulley whilst slicing a rat in half, I believe a rubber facemask can fool people into thinking you’re someone else, I believe a pilot can fly a helicopter into a tunnel dragged by a bullet train… but a guy NOT sneaking a peek at a hard-9? I call BULLSHIT. The male autonomous response to a female sitting that close to you is to at least start a conversation with nothing to say, even if the endgame of getting panty is a mission impossible. That body heat, that fuck-me skirt, so up in your bizness, she can plant a homing device on his shoulder. But Nerd keeps his back studiously turned, opens his paper to the dork pages and keeps reading.

Further, to work in a room with that level of security, don’t you think they would hire someone less of a dipstick? The “type” that would operate that room would be an Ethan Hunt type, trained in spywork, wetwork, and hero poses, in order to keep as many infiltrators at bay; someone who wouldn’t be duped into something as juvenile as letting his drink get spiked, someone who would TURN AROUND AND TALK TO THAT CHICK, MAN! 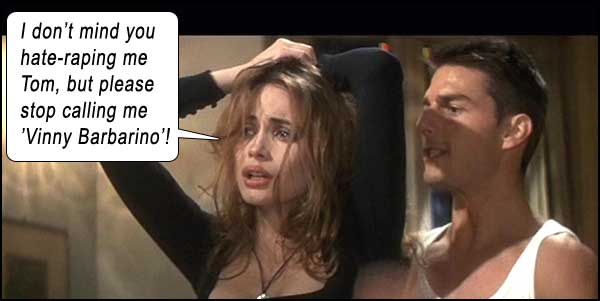 The final action sequence is so audacious that we can’t help but marvel in slack-jawed disbelief, while Lalo Schifrin’s magnificent Mission Impossible Theme is run through its paces by composer Danny Elfman; as a helicopter is dragged into a tunnel by a bullet train with two guys fighting on the roof of the train, trying to get to the helicopter! Then – that stunt from the trailer. And movie leaves us as breathless and spent as Tom Cruise’s coccyx.

Meanwhile, Luther is avoiding capture by employing the patented STAR WARS Rebel Method of stopping people getting through doors, by holding the door shut with all his strungth like a Mens… He’s the computer hacker, but his technology for door jamming is right up there with those Imperial soldiers on that ledge shielding their eyes from the planet-destroying Death Star beam with their forearms.