Taming the Beast of Man. 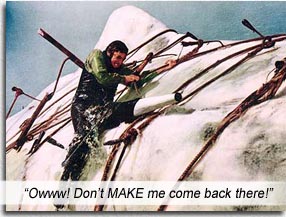 Call me Moby. Some years ago – never mind how long precisely – I thought I would swim about and see the watery part of the world. So there I am, big white sperm whale, enjoying the ocean green, going about my whaley business, when along comes Cap’n Ahab and harpoons me! Without so much as a “By your leave!”

So I et his leg and he turned into Gregory Peck, peg-legging it with his stovepipe hat and Abe Lincoln beard, and stump carved from a whalejaw (boy, does he need sensitivity training!).

He tells my tale from HIS mad cow point of view – calling me MOBY DICK, even though my name was Norman. Produced and directed by the great John Huston, screenplayed by the even greater Ray Bradbury, from that book by Herman Melville that tells a whole buncha lies about me.

Oh yes, I’ve read that book. And let me tell you, it wasn’t easy keeping the pages dry. Published in 1851, when there was no such thing as science, packed with racism, religious ideology, biological ignorance, pernicious non-conservation, and allegory that fooled you humans into thinking it was “important,” you foisted it on your kids at school. And I became famous! So famous that John Bonham named his drum solos after me! So famous that Moby named himself Moby (and if you squint, his head looks like a big white whale).

In that garbled tome sprinkled liberally with poetic Shakespearean asides and muntoid philosophies based around the existence of invisible deities, Melville calls me a fish. A FISH, sir?! Would your hubris be so shiny were I to classify you a bird? I am a MAMMAL, sir! Why, a fish and I are not even of the same Genus, Family, Order or Class in the Animal Kingdom. I’m closer to YOU than to a fish.

One or two disparaging “fish” comments might have worked in the context of the ignorant sailors chasing me, yet from the pulpit of his publishing contract, Melville haughtily gives specious, boring, chapters-long “scientific” dissertations on what makes me a FISH! (This is after Carolus Linnaeus already created the binomial nomenclature of the Animal Kingdom in the mid-1700s, though before Darwin’s On The Origin Of Species 1859).

Any ten-year-old could identify our fundamental differences, sir: Whales breath air through lungs, fish take in oxygen in the water through gills; whales have smooth skin and vestiges of hair, fish have scales; whales are endothermic (warm-blooded), fish are ectothermic; whales give birth to live young, fish lay eggs; and even our most basic difference is never noticed by this supposed King Of American Literature – whales swim by moving our tails up and down, fish move side to side.

And you “teach” this book in your schools!

MOBY DICK is about the psychological and physical price you humans pay for obsession and revenge. It’s also about the manly, sacred duty of whaling – WHALING?! Sheesh! The only thing more politically incorrect these days is killing baby seals. (And only I’m allowed to do that. Cos I’m a sperm whale, see.) Melville’s tragic drama revolves around hunting whales “for oil to keep the lamps in a thousand homes burning, and maybe anoint the head of a king.” Yet the tragedy pertains to Ahab’s obsession in sacrificing the lives of his crew in trying to kill me. What about the tragedy of “TRYING TO KILL ME”?

In an unintentionally funny moment, first mate Starbuck (Leo Genn) affords divine provenance to the egregious act of whaling: “It is our task in life to kill whales… If we perform that task well and faithfully, we do a service to mankind that pleases almighty god.” So of course, during a harpooning montage, frolicsome music accompanies scenes of blowholes spurting fountains of red, harpoons ripping the life from my brothers as they swim peaceably, majesty defiled in a bloodied maelstrom, sailors jovially slicing blubber and boiling down pieces of my family…

This is what Melville wrote – this is what people believed in those days. But those days are past. You must ask yourselves: What makes something a classic? It should stand the test of time. Moby-Dick; or, The Whale should be treated almost like a scientific precept where, once it is disproved or built upon with better evidence, we should move past it. No one still believes the sun revolves around the Earth, so that particular anthropocentrism has been removed from educational curriculums. Yet even though you now decry whaling and understand the biology of us mammals, Melville’s ignorance is still “taught” – because it is couched in Greek Tragedy, because you all relate to the low human traits of revenge and obsession, mob-rule and religious superstition.

Starbuck warns Ahab of the folly, “…to be enraged with a dumb beast that acted out of pure instinct…” Did he just call me dumb? Oh, and I guess pumping trillions of chemicals into the Earth’s atmosphere and affecting the environment adversely is smart? He calls ME dumb, when only the beast of Man commits suicide, only Man can be obese, only Man tries to make his sick live longer yet sends his most healthy to die in wars; only Man seeks revenge…

But don’t mind my logic. I’m just a dumb beast: They try to kill me; I smash their boats like The Hulk. And I’M the bad guy!

Despite all this, MOBY DICK is an entertaining film, with Gregory Peck doing his most intense Gregory Peck impersonation. Orson Welles scares us all as a preacher, by using an Orson Welles voice. Harry Andrews is second mate Stubb, who would “tie a knot in the devil’s tail for a laugh,” meaning he’s latently gay. And big Friedrich von Ledebur is Queequeg, ritual face tattoos and superstition maximus, who “sees his death” in a dice roll and tells the carpenter to make a coffin for him. And they call ME a dumb beast…

Richard Baseheart opens the narration with “Call me Ishmael,” one of the most famous opening lines in history (only cos I’M the star of the book!). The funniest thing is not imagining Baseheart pondering and fretting for hours on how to deliver that legendary line, but hearing his romantic voiceover on how the sea calls every man – and him ending up as the Cap’n of a submarine in 1964’s VOYAGE TO THE BOTTOM OF THE SEA!

From New Bedford, Connecticut, The Pequod relentlessly pursues me, the charisma of her Captain Ahab driving his mob crew onward, taming the lightning, offering gold reward, driving unto death: “I’ll follow him around the horn and around the Norway maelstrom and around perdition’s flames before I give him up!” (Which lent untold cheese to Ricardo Montalban Khan in STAR TREK II, 1982.)

Through chroma-key and the cunning use of unconvincing models, the final battle is waged, with a stiff doll representing me – every time they show Moby arcing across the waves, he doesn’t so much arc as “plank” over the surface of the ocean.

The number of times I’ve heard that cry, “Thar she blows!” – Sheesh! Always when I’m in the shower! You know how hard it is to score chicks with twelve irons sticking out of your side? But I took your captain, lashed to my side like a doll. And I took your vessel. And I took your lives – except for Richard Baseheart, cos he had that audition for VOYAGE TO THE BOTTOM OF THE SEA…

So when ye speak of the Great White Whale, landlubbers, let your tone be pertinent and your eye be downcast. Kneel before me, sons of Jor-El!