Machinery… because The Future!

The Future Back Then.

It’s MODERN TIMES in 1936! The machines are taking over; industrialization is cutting jobs, and those jobs that remain are repetitive, drudgerous tasks that drive men batty. Such is the case with the Little Tramp (Charlie Chaplin), whom we meet working a “modern” assembly line.

Through a series of adventures, that finds Little Tramp joining forces with a street urchin and trying to hold various jobs, the story wends its way through further scenarios fueled by the economy shifting to favor mechanized labor.

Of course, the flavor and funny of any Chaplin movie is not based on its meager plot, but on the inventiveness of the pioneering sight gags Chaplin wrote and directed for himself. In MODERN TIMES, we are treated to the assembly line gags (with Chaplin pulling off clockwork timing), the feeding machine (a commentary on the hubris of corporate thinking), the cog machine (which seems to do nothing except be a machine for cogs); there are the jail gags, the blindfolded skating near the edge of a precipice, the waiter gags, and then the feature of Charlie Chaplin himself warbling a nonsensical song in synchronized sound!

There is even a surprising advocacy for being in jail! When life on the streets and in a factory prove too hard for Little Tramp, he makes a nice space for himself in jail, wishing to return to its comfort when he is ejected, for its relative consistency in times of famine.

Out in the hungry streets, Paulette Goddard, proving there are angels. She plays a “Gamin” (a street urchin), stealing food for her destitute father and sisters. Chaplin’s real life girlfriend at the time, Goddard is so innocently delectable – skin like stretched silk, innocence unleashed, sparkling bright eyes – one can see where the myths of unfathomably exquisite heavenly creatures might have originated. Her father is murdered in a street shooting, and when she desperately steals a loaf of bread, Little Tramp saves her from the law. At one point, we see a closeup of a police report, showing a picture of Goddard looking delectably street-dirty, with a policeman writing “Wanted for vag–” Wanted for vag?! Oh god, yes! Mainly by me– oh, sorry, he’s writing “Wanted for vagrancy”… 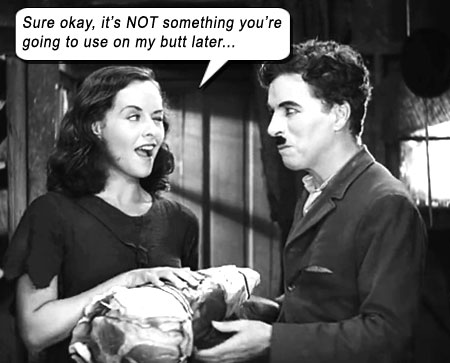 It’s MODERN TIMES in the world of silent cinema too: while the rest of the industry had turned to synchronized sound in film, Chaplin staunchly refused, and this movie would in fact be his last technically “silent” film. “Technically” because it is a mixture of title cards denoting dialogue, people overacting silently speaking while a soundtrack jangles under them, and synchronized sound in certain sequences – the boss of the factory, a dog barking, some sound effects, and of course, Chaplin singing. It was regarded widely as an “almost-silent” film.

The title is more about the tenor of the times (unemployment, leading to crime and disenfranchisement) than mechanization replacing human labor, although that seems to be one of the reasons for the high unemployment. There are two scenes that involve factories where giant cog wheels represent “modernization” (and probably “futurism” as well). An alternate title was THE MASSES, and the opening shot of factory workers being compared to sheep was a cutting commentary; it’s a passé dig now, but back then, it was a new concept.

Through the hard times of modern times, Chaplin’s message seems to be that love will see you through, as Little Tramp and Gamin secure a shack together, find a job together, and eventually get kicked out of town together, with Chaplin’s last title card being “Buck up – never say die! We’ll get along.” But the “romance” is played so innocently – it is made absolutely clear that they never share a bed, a kiss or even a dirty thought – that it robs their relationship of poignancy. It’s like watching Just Friends discuss recipes. Who cares? With Smile (Though Your Heart Is Breaking) on a loop, we want to see these two as an item, we want some indication theirs is a mature adult relationship, rather than the gutless go-nowhere censorship version of couplehood. But they walk off into the sunset arm in arm like brother and sister. Just goes to show that not everything is modern about the times…