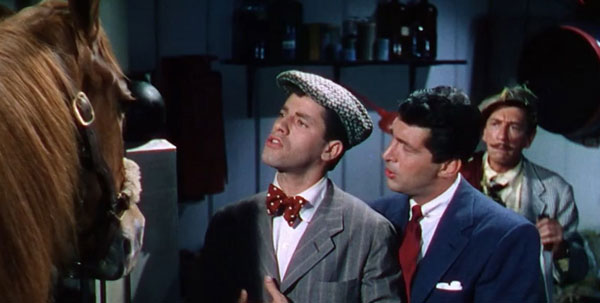 When “horse’s ass” could be referring to absolutely anything or anyone.

Martin and Lewis on the money!

Honey-Talk Nelson (Dean Martin) is in deep to the mob. To make good on his debt, he is ordered to “fix” a horserace so that the favorite loses. He enlists the aid of his innocent veterinarian cousin Virgil (Jerry Lewis) to dope the favorite, but then falls for the horse’s owner, whilst Virgil falls for the local vet, both ladies having large stakes in the favorite winning. Now Honey-Talk and Virgil want the favorite to win – which means double-crossing the mob…

MONEY FROM HOME is one of the best-written Martin and Lewis musical comedies. From a story by acclaimed American writer Damon Runyon, James Allardice (his 4th film with Martin and Lewis) and Hal Kanter (ROAD TO BALI) screenplay for director George Marshall (who directed Martin and Lewis in MY FRIEND IRMA and SCARED STIFF), in a movie with many aspects that just come off as refreshing. 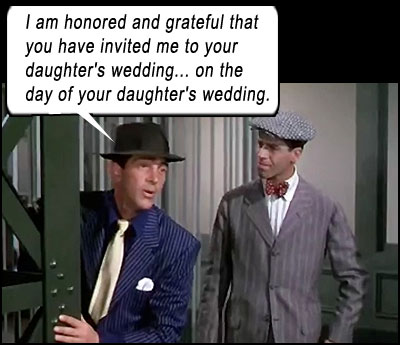 The solid action-comedy plot is refreshing in its tightness, with all the Martin-Lewis gags performed organically within the story, rather than being shoehorned in with no relation to the throughline (e.g. Jerry’s drag scene in AT WAR WITH THE ARMY, the boxing scene in SAILOR BEWARE).

It is very refreshing to see in the opening credits, “Special Material in Song Numbers staged by: Jerry Lewis.” At last – acknowledging Jerry’s considerable input to his films; if it weren’t for his unique take on how to frame the Martin and Lewis interaction, the team would have ended up just another forgotten duo.

It’s refreshing that the girl whom Jerry falls for (Pat Crowley as Dr. Autumn Claypool) is a mature, educated woman (as opposed to all the infantilized “Freckleheads” that writers would pair Jerry with, to match his infantile personas). Though Jerry was being allowed to “grow up” in the eyes of his public, yet the demeaning societal attitude toward women persisted, manifested in Autumn’s line, “Women can do anything men can do” in relation to her being a vet. I know modern women are still fighting for certain rights, but back in 1953, that line had a petulant edge, with an undercurrent of not really believing its veracity; there was an attitude that “Women CAN, but don’t WANT to, because men WOULD,” rather than “Women CAN and WILL.” So though they made Autumn a strong woman, they diluted her character with that line. 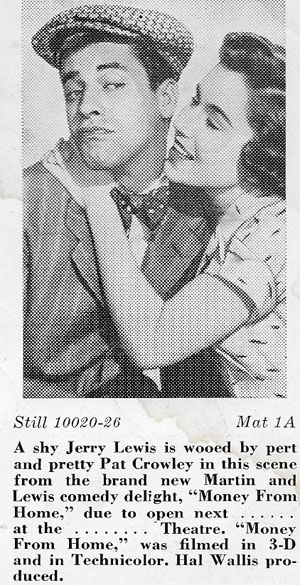 And here’s something refreshing for the fans of the day: MONEY FROM HOME is the first Martin-Lewis film in COLOR! (It was originally released in 3D as well.)

Opening scenes show a clutch of gangsters dressed in flamboyant gangster couture (dark suits with bright ties) bringing Honey-Talk (so named because he can talk strangers out of anything) to confront the boss, Jumbo Schneider (Sheldon Leonard). With everyone talking like schoolboys talking like gangsters. More than once Honey-Talk tells them of his lucky premonition, “I got that feelin’ right in the seat o’ my pants…” Oh, the double entendre fun we could have with that nowadays…

Marjie Millar is Phyllis, the owner of the favorite horse, called My Sheba. (Another young lass with a waist the size of a wrist and two triangular bra-pieces for her A-tey-teys. It was the protocol in Hollywood at the time – you wanted to be a working actress, you starved yourself until your frame could fit through a keyhole.) Richard Haydn (who would go on to be the inscrutable Max in THE SOUND OF MUSIC) is Bertie Searles, the forever inebriated jockey for My Sheba, who fulfills a farcical passive role much like Bernie in WEEKEND AT BERNIE’S.

High points include: Jerry getting the first song – to a menagerie of animals; Jerry posing as a harem girl with Dean as a sultan’s aide; Jerry pretending to be British to impersonate Bertie; and a raucous final steeplechase where Jerry rides My Sheba against the villain jockey, Gerald Mohr (the over-smug lead of INVASION USA, 1952; here, not able to out-smug Dean by a long shot).

The only gag that seems out of place is the feature piece – the Cyrano de Bergerac gag, where Phyllis gets mad at Honey-Talk, and he wants to make it up to her, so sends Virgil to lip-sync under her balcony while Honey-Talk sings I Only Have Eyes For You. Now, you ask, why didn’t Honey-Talk himself just serenade her? “Because she’s mad at me,” explains Honey-Talk to Virgil. So what does this achieve? If Phyllis sees Virgil singing to her, is she going to think Virgil is coming onto her? And if she recognizes Honey-Talk’s voice, by Honey-Talk’s summation, she’d be “mad” still. Or what if she comes to the window expecting to see Honey-Talk, and sees Virgil, and falls for Virgil? Did anyone think this through? Nope.

That’s definitely Jerry shoehorning in one of his gags. You know how I can be so sure? Jerry Lewis got started in showbiz as a “record act” – where he would lip-sync to records while doing different characters onstage. (It was while he was doing that lip-sync act that he met Dean Martin. And the rest, as they say…) Over the course of their career, Martin and Lewis brought many of their onstage gags to their films (especially the “Jerry-conducting-Dean-singing” bit quite often), so in this, their 10th film, Jerry at last found a place for his “record act”—I mean, shoehorned a place… 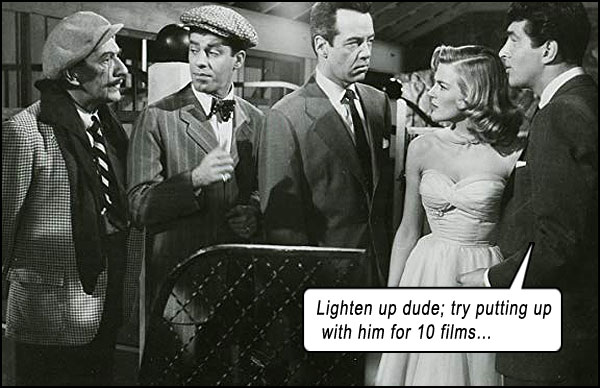 MONEY FROM HOME followed THE CADDY, where Dean went a little poopyhead on Jerry, so it is refreshing to see them here once again tightly allied through all their adversities. And any movie featuring Rossini’s William Tell Overture in its finale will always be as refreshing as a bucket of water to the face…

Ironically, just before shooting started on MONEY, Martin and Lewis were so over-booked (with club dates, TV appearances, live appearances, etc.) that they accidentally neglected to play a club that was owned by – The Mob! And – like Honey-Talk in this movie – had to make good on their marker somewhere somehow! Also, coincidentally, after this movie where Jerry puts on the Briton, Martin and Lewis were successful enough overseas to be able to do their first United Kingdom tour.

Wait, I can understand Steve, Bob, Bill, and even Chick – but Honey-Talk? Now that’s money.

SONGS (by Joseph Lilley, Jack Brooks)
• Be Careful Song (Jerry)
• Love Is the Same (All Over the World) (Dean)
• Moments Like This (Dean) (by Burton Lane, Frank Loesser)
• I Only Have Eyes For You (Dean) (by Harry Warren, Al Dubin)