Brad Pitt ends MONEYBALL with, “How can you not be romantic about baseball?” which is ironic, because he just spent the whole movie deconstructing The Great American Pastime’s romanticism with “sabermetrics” (a clinical mathematical process that focuses purely on statistics to choose players), wheeling and dealing at the highest levels of the baseball industry with wrath-of-God money, and buying and selling players like sides of beef. So romantic. 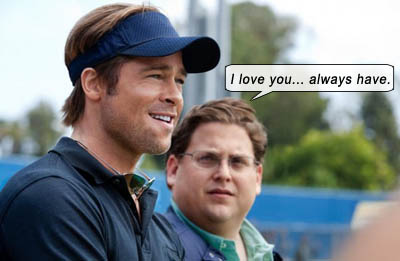 Pitt plays the real life talent buyer for the Oakland A’s, Billy Beane, who was awarded a baseball scholarship for his unlimited potential in all disciplines – pitching, hitting, fielding – which proved to be a bust. He just didn’t have the follow through. Now in his late 30s, general manager of the A’s, he finds himself taking advice from the crotchety old men on his board, trying to beat the big-budget teams on their own ground – by buying superstar players, with no budget to speak of. In desperation, Billy latches onto a statistics whiz-kid, Peter Brand (Jonah Hill), whose advice seems to be working for other teams with minimal budgets.

Brand’s strategy is not to be distracted by the glam value of players (“Does he have a good-looking girlfriend?” “Is he a drug risk?”), but to go deep into their stats (How many times do they get on base? How many walks can they accrue?). Beane and Brand put their counter-intuitive strategy into motion, raising eyebrows within the Oakland board on why certain non-glam players are making it into the team, not least the ire of coach Art Howe (Philip Seymour Hoffman in a small but brilliant performance).

The strategy works. While it was being implemented, the crotchety old men resisted, their excuse: that it was threatening the game, but it was really a threat to their livelihoods; all the experience they had accrued over the decades being discarded. Oakland A’s would go on to win a record 20 games in a row at one point. When asked why he was still morose, Beane tells Brand he cared nothing for the money, the records, the rings, “If we win on our budget, with this team, we’ll have changed the game.” He wanted a sea-change, he wanted baseball to be regarded from this statistical angle, undervalued players chosen on their merits over the glamour boys…

Be careful what you wish for…

MONEYBALL shows us the genesis of the strategy that now informs all baseball drafts. Beane’s methods worked so well that he shot himself in the foot. Whereas he once had an intellectual advantage over the big budget teams, when the big budget teams did in fact adopt his methods, they then also possessed his strategic expertise PLUS big budgets!

“Money can disregard what baseball likes and dislikes.”

Directed by Bennett Miller (from the book by Michael Lewis, Moneyball: The Art of Winning An Unfair Game), MONEYBALL’s performances are naturalistic method with unobtrusive camera. Hill keeps it straight, and Pitt keeps it grounded. The scenes around the scout table arguing player merits are like real meetings, with overlapping dialogue, occasional stammering, and straightforward discussion even when perturbed. Who are these fantastic old guys, and why don’t they seem like they’re even acting? One scene between head scout Ken Medlock and Pitt illustrates perfectly that unspoken fear of becoming irrelevant, and the exemplary naturalistic acting, as a talk about destroying the team turns into a quick exchange of blows, Pitt pushing the frustrated, jabbing Medlock away from him. It’s not “movie fighting”; it looks like a real case of someone getting jabby and being shut down.

How do fans keep any loyalties to their teams with all the players being swapped so often and nonchalantly? And so obviously for money? And when a ball player you worshiped is suddenly sold to a team that is playing against your home team, what then? And if you do in fact find baseball romantic, isn’t all this shuffling of players in a meat market more like one big gang bang?