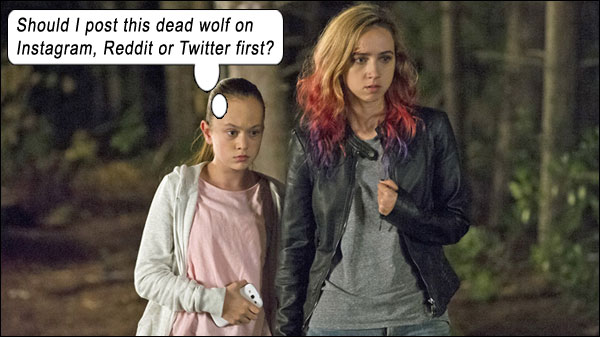 White Trash: When a mother looks like her daughter’s older sister.

Tropes on a Forest Road.

Mother and daughter on road trip. Breakdown on deserted road. Monster attack. That’s about it in THE MONSTER, an average thriller that ambitiously tries to be more than the B-movie it is.

Zoe Kazan is a white trash alcoholic single mom, and Ella Ballentine is disenchanted teen daughter Lizzy. As if sensing the minimal substance here, writer-director Bryan Bertino adds reams of backstory/flashback to create a strained relationship between mom and daughter, but it all amounts to naught when the screaming starts.

One night, taking Lizzy to her father, mom hits a wolf on a deserted stretch of road, careens to a stalled stop, and calls a roadside mechanic. Mom and Lizzy exit the car and examine the wolf, while point-of-view shots tell us there is a monster watching them from the foliage.

Mechanic arrives. Killed by monster. Ambulance arrives. Killed by monster. Rain beats down. Lizzy must get their keys out of mechanic’s van, so walks slowly in the downpour towards the van; it might make for tension, but who behaves like this in pouring rain? The thriller tropes are all here, but not good enough to be compelling, and not cheap enough to be “so bad it’s good.”

Earlier, while examining the wolf, they picked up a tooth that resembled a shark’s tooth – triangular, serrated; later, when we see the monster (a guy in a wet black bodysuit, with a headpiece that looks like Venom), it has pointy knife-like teeth that look nothing like the shark’s tooth. So who do we fire in the prop department?

Acting is exceptional though, both Zoe and Ella called upon to be in constant pain (physical or emotional). We can only imagine how exhausting a shoot like this must be.

THE MONSTER is a streamlined thriller in basically one location with two main actors; a linear story that doesn’t need such a layered character backstory, as the events of the night in the forest are not predicated on anything from the characters’ pasts.

Lizzy ends with a voiceover that sounds as if she’s trying to analogize the real life monster with the “monster” of alcoholism. “My mom tells me there’s no such thing as monsters. But she is wrong. They are out there, waiting for you… watching. Sometimes where you see them… Sometimes where you don’t.” What the–? This monologue is not a payoff, not a callback, not anything – just pointless rhetoric that wants to be in a better movie.

Bertino’s 3rd writer-producer-director effort (after THE STRANGERS 2008, MOCKINGBORD 2014), he looks to be carving a niche for himself in the straightforward horror-thriller genre. But Berty, are you wading out too deep for your shallow B-movie?