This movie was just as asinine when it was called MAID IN MANHATTAN. 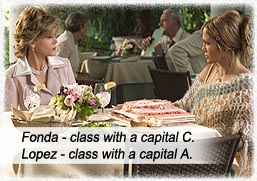 All Hollywood romantic comedies which aim their two heterosexual principals at marriage – will attain that goal. This is a scientific fact. Also a fact is that once the brain-fuzzed couple has affirmed their intentions to marry, all manner of obstacle – from plausible to ludicrous – will land in their path, impeding their progress toward that fateful day when all lust dissipates.

The ultimate success of this vapid species of lowbrow film depends on how entertaining the obstacles and their surmounting.

In MONSTER-IN-LAW, the befuzzed couple is Charlotte “Charlie” (Jennifer Lopez) and Kevin (Michael Vartan). The obstacle is Kevin’s mother, Viola (Jane Fonda). And the fact that the film’s director Robert Luketic and writer Anya Kochoff don’t know what comedy is.

Lopez has had an inexplicably successful career for someone so transparently untalented. The fact that her favorite film is DEUCE BIGALOW: MALE GIGOLO speaks volumes about her acting prowess. Or lack thereof. Unconvincingly playing some kind of insufferably sprightly, multi-tasking temp, who can yet afford what looks like a three-g apartment on the Venice Beach boardwalk, we can only assume that Charlie must emit some repugnant stench for her days not to be filled with panty-hounds endlessly hitting on her as she walks rich dogs on the beach. 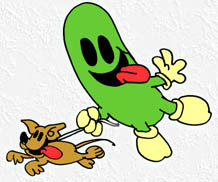 Vartan, whose undistinguished career lands him on the wrong side of Poor Man’s Tom Cruise, perpetually five o’clock-shadowed, plays a ball-less, insensate cur of a doctor-boyfriend. In a move which should land him in lifelong therapy regarding his Oedipal dysfunction, Kevin actually proposes in front of his mother. Sealing his Ken-doll demeanor, he remarks to Charlie later: “I would have done anything to get you to move in with me!” Well, that rules him out as a urologist – he’s obviously never grabbed a ‘nad in his life.

Wanda Sykes, ever-earthy, plays Viola’s personal assistant, and seems like she is given too little to do, but is in reality being reined in to keep from stealing the show from the uninteresting betrothed couple.

Usually, obligatory gay friends are featured in films of this nature simply to make juvenile innuendo, but in this film, Adam Scott plays Remy, the gay neighbor, in an effort to make Vartan actually look masculine.

Minimally elevating the play to a mediocre level, performing her comeback role with evil glee comes a banshee Jane Fonda. After 15 years in retirement, though she has barely made a clutch of films worth remembering, her family name deserves better than to be associated with moronic sewage spill such as this. Her role as domineering, willful obstacle in Charlie’s and Kevin’s path to marriage, though fleshed out with ferocious brio, fails in the grand scheme of Hollywood Romantic Comedy Protocol: ultimately, she HAS to recant her stance. It is a scientific fact that obligatory resolution of all vexations in Romantic Comedies shall occur within ten minutes of the end credits; by observation, this evidence is incontrovertible. Even physics laws break down at Heisenberg’s Uncertainty Principle, or the wave-particle theory of light, or dark matter. Not so with Hollywood Romantic Comedy Protocol. Fonda, like all others before her, must adhere to this formula or the Universe will surely end.

And in her recanting, in her sudden 180-degree from bitch to pooch, she compromises every motivation and action that went before. And viewers must face a terrible truth: as with all romantic comedies, female talk shows and the Hindenburg Disaster, MONSTER-IN-LAW is simply a waste of humanity.