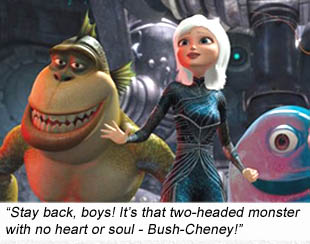 MONSTERS VS ALIENS is a suitably giggly concept, well executed in 3D animation, well written, with funny characters and a straightforward storyline that kiddies will understand. Yet it fails for a fundamental reason – it advocates Guantánamo Bay!

As a human being with compassion towards other human beings (yes, I’m talking to you directly), what would be the first thing you would do if a woman suddenly grew to fifty feet tall? You would try to get her help, right? Not so if you are a misanthropic swine like Bush-Cheney – at the first sign of “difference” you would declare her an “enemy combatant,” persuade everyone she is a “threat,” then lock her away with no habeas corpus, no rights, no legal prerogatives, no resolution, in a cell with no windows.

This is what happens in MONSTERS VS ALIENS. Young bride-to-be Susan (voiced by Reese Witherspoon) is hit by a meteorite, which makes her grow to fifty feet tall on her wedding day – at which point the military shows up and takes her captive without one word of permission, compassion, approval or apology. She is told her subterranean prison is so secret, it is “an x-file, wrapped in a cover-up and deep-fried in a paranoid conspiracy.” In other words, it’s a rendition. (Coincidentally, Witherspoon played the wife of an Egyptian-American kidnapped and tortured by Americans in RENDITION.)

What does this teach the ignorant populace, let alone impressionable kids? I’m sure that wayward vagina, Liz Cheney (daughter of even bigger vagina, Dick) is forcing her kids to watch the opening scenes of MONSTERS VS ALIENS as if it’s a documentary.

So even though I want to laugh at the many funny moments in this movie, it is informed by plot lines like this. And I can’t see anything funny in General W.R. Monger (Kiefer Sutherland, sounding as unbalanced as R. Lee Ermey in FULL METAL JACKET) telling Susan as he locks her away, that “the government has changed your name to Ginormica.”

I’m sure that Stephen Colbert (of THE COLBERT REPORT), who voices The President of the United States, would have noticed this misanthropy, but he’s being employed merely as an actor here, so had to let it slide without biting commentary.

In prison, Susan meets other detainees, kept just as unwillingly, but more humorously, since the less a lifeform resembles us, the more vicious we can be towards that lifeform without guilt: Dr. Cockroach Ph.D (Hugh Laurie), The Missing Link (Will Arnett), and B.O.B. (Seth Rogen, who brings his crazy little laugh and scattered personality to this blue blob, unlike his innocuous participation in other animated features, like HORTON HEARS A WHO or KUNG FU PANDA).

Together, they defeat the forces of Gallaxhar (Rainn Wilson), an alien who wants the essence from the meteorite that landed on Susan.

Some of the funniest scenes take place on Gallaxhar’s ship, which is an architectural wonder. In 2009, we take a lot of visuals for granted because of computer technology, so we have to step outside ourselves to admit that the destruction scenes of the interior of Gallaxhar’s ship actually look more “realistic” than the interior destruction of the Death Star in RETURN OF THE JEDI! Let’s face it – referring specifically to only those scenes (where a giant generator-type thing starts falling and splintering), both are “non-real” scenes, either matte paintings and/or computer animation, so we are comparing apples to apples, not live-action to a cartoon.

Everyone ends up Disney happy, obviously because it’s only a kid’s fantasy disconnected from reality.

Directors Rob Letterman and Conrad Vernon (who also participated in the writing) predictably fill their movie with messages of self-realization and philanthropic acceptance. Ironic then that they depict their own government so callously as being the opposite – but again, this is because America as a nation has become so inured to the criminality of the Bush-Cheney War Crime ethos (being perpetuated and promoted even after their doomsday reign by the Cheney cabal) that it is now considered comedy. Not even black comedy, but mainstream, nay, KIDDIE comedy!

But Guantánamo (and other “black sites” like it) are no laughing matter; creations of pathologically insane sadists – the real monsters: Bush-Cheney.