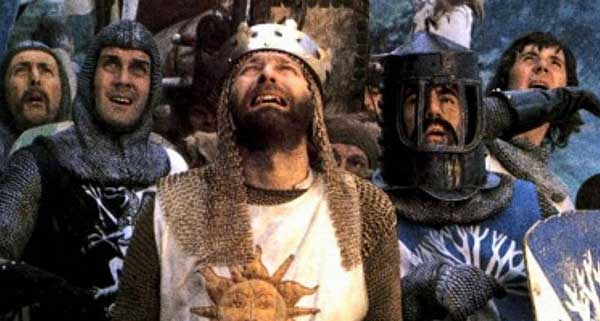 How We Know the Earth to be Banana-Shaped.

Delivered on a budget which would hardly diminish the air-speed velocity of an unladen swallow, MONTY PYTHON AND THE HOLY GRAIL boasts the production values and inherent quality of a movie ten times its cost.A lesson in resourcefulness, HOLY GRAIL succeeds because it excels at what made Hollywood such a star-mart in the first place – its writing and acting. On a meager budget of 229,000 pounds (approx. $500,000), Python schools Hollywood on the Shakespearean value of playing all the parts yourselves, attending to authenticity in set dressing and costuming, and using really, really silly voices.

King Arthur (Chapman) is empowered by God to seek the Holy Grail, thus surrounding his royal person with the Knights of the Round Table, Sir Lancelot (Cleese), Sir Galahad (Palin), Sir Bedevere (Jones), Sir Robin (Idle) and, with his trusted steed, Patsy (Gilliam, clopping coconuts together simulating hoofbeats), he rides toward Camelot…

Camelot… where the Knights of the Round Table “dance whene’er we’re able” and “eat ham and jam and Spam a lot,” which Arthur surmises is “a silly place” and avoids, instead journeying with his troop through forests rank with evil, encountering the contempt of French soldiers at Castle Guy de Lombard (who taunt Arthur’s “Ke-niggits” most hurtfully), refrain from the sensuality of all-female Castle Anthrax (where Galahad The Chaste is rescued – somewhat unwillingly – from The Oral Sex), fall into nefarious service of The Knights Who Say Ni (though Arthur provides a well-tended shrubbery as payment, cutting down the mightiest tree in the forest with a herring is asking too much); past sentinels who will not let them pass, allying with Tim the Enchanter, battling a killer rabbit with the Holy Hand Grenade, fleeing the Legendary Black Beast of Aaaaargh, muddling their questions at the Bridge of Death with the Old Man from Scene 24 and ultimately crossing the Gorge of Eternal Peril.

Educated, lucid, atheistic, amoral, Monty Python could and did attack every taboo held by the stiff upper crust to the working class alike. Though many have tried – from America’s SATURDAY NIGHT LIVE to Britain’s LEAGUE OF GENTLEMEN, with Canada’s KIDS IN THE HALL brushing up against the magic before their untimely dissolution – retrospect has proved what a sui generis phenomenon Python was.

Of course, if you don’t “get” British humor (i.e. real humor) or if you don’t “get” Monty Python (for which there is no reason to continue living), let’s not bicker and argue over who killed who; you should wait here until I come and get him… And no singing!

Now go, before I taunt you a second time…