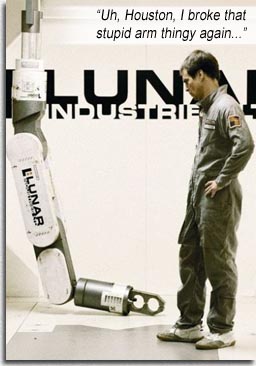 This isn’t ARMAGEDDON or MISSION TO MARS, or even STAR WARS; MOON embraces the iconography of 2001: A SPACE ODYSSEY, SPACE:1999 and SILENT RUNNING.

Sam Rockwell is astronaut Sam Bell, a lunar miner nearing the end of a three-year contract maintaining harvesters on the far side of the Moon, harvesting helium-3, a new energy source which has overjoyed Earth corporations. Sam has two weeks to go. And he is definitely losing his mind.

“Want an axe to break the ice. Wanna come down right now…”

The Moon is only a couple seconds transmission time from Earth, yet Sam has no direct communication because his transmitter is faulty and the Earthbound corp has not bothered to send someone out to fix it…

… so he must contend with delayed messages from his beautiful wife and baby daughter whom he has never met.

“Tell my wife I love her very much. She knows…”

Sam’s only companion is GERTY, a HAL-like computer voiced by Kevin Spacey (who has a foreboding voice at the best of times – in a supercomputer that has control over your living conditions, it is downright jumpsuit-browning scary).

One day, Sam goes out to check on a harvester and crashes his rover. He wakes in the infirmary, staggers out half-conscious and walks in on GERTY having a real-time conversation with his corporate bosses on Earth. Did he just see what he thought he saw – direct communication with Earth?! GERTY assures him he didn’t…

“Now it’s time to leave the capsule if you dare…”

Something is bugging Sam. He drives out to check on that harvester again – and finds the crashed rover. Inside – he finds himself. Literally.

Floating in a most peculiar way…

MOON is Duncan Jones’s debut feature, already winning acclaim and awards. It is pure old school, with no lasers or aliens or bombast, yet tension as palpable as piano wire tightening around your chest; a controlled mystery drama with one large moon base set, one man, one computer, one mission; exteriors are cute little model buildings on authentic-looking Moonscapes and tiny six-wheeled rovers rolling along in slomo to simulate one-sixth gravity. All underscored by the eerie music of Clint Mansell (REQUIEM FOR A DREAM).“Planet Earth is blue and there’s nothing I can do…”

One Sam is fit, healthy, while Sam from the crashed rover is falling apart physically. Both realize that cloning has been done without their consent or knowledge – yet neither knows which is the clone…

Without doubt, this is Sam Rockwell’s most inspired acting performance of his career. Like Michael Keaton in MULTIPLICITY or, to a lesser extent, Kevin Kline in DAVE, we lose cognizance of the constant camera trickery going on. Actively and passively, our eyes are being fooled by a combination of special effects, creative editing and sensational dual acting.

But MOON’s underlying disturbing message is not the fact that clones exist – it is the fact that corporations will use this device to once again line their pockets and screw people over; how the bottom line overrides any kind of human element or ethics. That makes MOON a biting potent indictment of modern day corporate misconduct and dysfunction.

“I heard a rumor from Ground Control – oh no, don’t say it’s true…”

The Space Oddity doesn’t fall far from the Starman.