Of gods and mothmen.

THE MOTHMAN PROPHECIES is a well-directed, original psychological thriller about a stranger (Richard Gere) in a small town who is driven almost mad with disembodied voices warning of danger, all the while hearing tales around town from reputable witnesses, of an eight-foot tall “Mothman” that could somehow be connected to the prophecies. The story of the actual town this story is based on is eerie, slightly disturbing and still unexplained, which makes for a great teaser to a good movie. But this movie’s quality has little to do with that story… 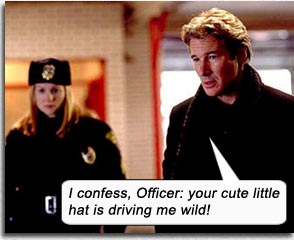 MOTHMAN is based loosely on a book of the same name by John Keel, which was itself a fiction based on alleged sightings of a large winged creature in the small town of Point Pleasant, West Virginia between 1966 and ’67. Keel’s The Mothman Prophecies recounted numerous, inexplicable sightings and events, sometimes involving a peripherally-glimpsed giant moth-like man with “red, glowing eyes.” The town has created a mythos that it was “in the grip of something supernatural”; people were receiving messages about upcoming tragedies via disembodied voice and phantom phone call, and the real-life collapse of the Silver Bridge over the Ohio River in December 1967 is also audaciously attributed to this reign of… uh, prediction. No matter that none of the Mothman prognostications to Pleasant residents ever came true, or had already occurred, the mythology somehow gained legs (or sprouted wings, as the case may be). And it doesn’t hurt that the place is filled brim to barrel bottom with maroon-necks.

Keel brought together myriad strands of paranormal phenomena to create his quirky, disjointed novel (lights in the sky, farm animals slaughtered, phantom phone calls), which read like one of those “found footage” films. The fact it was a novel – the publishing company actually catalogs it under “fiction” – didn’t stop “UFOlogists” and paranormal investigators becoming tipsy that they could now point to Keel’s tome as further “corroboration” for their imbecilic sightings and conspiracy rantings.

By the time we get to this film, a third generation telling of these moth-eaten rumors, it is THE AMITYVILLE HORROR all over again: the original house in New York was the scene of a mass murder, then the Lutzes moved in and claimed paranormal disturbances, which became the book by Jay Anson that created “cloven hoofprints in the snow,” that became the movie with The Devil rubberstamping every little jump scare.

Thusly, artistic license flying bravely from a flagpole, director Mark Pellington utilizes every tool in the True Horror Handbook to create an unnerving experience in THE MOTHMAN PROPHECIES, from eerie sound design to odd camera movements and focus. Pellington has taken care to craft the film with numerous wing-like shapes subliminally and explicitly in the frame. Everything about MOTHMAN is designed to give us chills – eventually even a too-loud ringing phone raises our hairs; it is old-school horror, with no cheap gore, no jump-scares, no axe-murderers and, thankfully, no explanation that ties it all together.

Gere is John Klein (an analog for John Keel), a newspaper reporter whose wife (Debra Messing) dies after a car crash, lamenting from her hospital bed that “you never saw it, did you?” We saw what she saw – an indistinct, winged thing that leapt at the windscreen. Klein later picks up drawings that she made on her deathbed: black-red scribbles of an undefined horror.

Two years later, Klein is sent on assignment in another state and breaks down over 400 miles in another direction (at Point Pleasant), not knowing how he got there. He feels compelled to stay in the town, especially when one of its residents, Gordon Smallwood (the great Will Patton), claims to have seen Klein night after night, even before he was stranded there, and claims to hear predictions of tragedies which are coming true; or maybe he’s staying because of Sheriff Connie (Laura Linney), a cute blond who doesn’t tie her hair back on duty, whom we presume he immediately plonked, from the way they make googoo eyes at each other the next time they meet…

The interaction between Klein and Connie is as much a mystery as the Mothman, as there is no gratuitous sex scene to signify when they become an item. Their healthy attraction is like uh, moths to a flame, and merely a few scenes after their inauspicious meeting, they are touching and embracing intimately out of nowhere. I guess it’s a nice change to see a movie where the new couple doesn’t even kiss onscreen, yet we know they’re bumping like human centipedes.

Klein receives phone calls from people who claim not to have called him; he in turn, is accused of calling people he never called. This is somehow more terrifying than a killer threatening you with calls coming from Inside The House. One chilling call is from “Indrid Cold” who could well be The Mothman, but that is never made clear. Also, there IS no “Mothman” – no eight-foot tall rubber monster, no CGI or stop-motion beast. There is one quick hair-raising shot in a moving mirror. But it is never explained. That’s the beauty of this old-fashioned horror tale: it’s always better to leave the monster to the imagination.

Klein visits a man named Leek (Keel spelled backwards), who used to hear voices and tried to act on averting tragedies, which only made matters worse – and the tragedies occurred anyway. He hypothesizes that the Mothman, or whatever entities are broadcasting on the Prophesy Channel, are not “warning of tragedies” but gloating over the tragedies they themselves are creating, which is a great new angle on supernatural prophets with big mouths.

In response to Klein opining that the voices are “gods” or “more advanced” Leek says it’s all perception, and points to a skyscraper, “If there was a car crash ten blocks away, that window washer up there could probably see it. Now that doesn’t mean he’s god, or even smarter than we are. But from where he’s sitting he can see a little further down the road.” Now that’s cool. I usually abhor rationalizations on para-dimensions, but the dialogue in MOTHMAN flows naturally and is compelling, not apologist. Film has a touch of DONNIE DARKO, as questions are raised about precognition, predestination and foresight, and whether linear time can be breached to issue warnings and change its course.

Unlike the town or the book, there is a definite throughline and a purpose to Klein’s presence in Pleasant. The dénouement involving the collapse of the Ohio River bridge is well-crafted, yet ties up things too neatly, and dilutes the preceding eeriness somewhat. It is made to look like the prognostications were beneficial – even though the movie bravely questioned that motivation earlier.

I’d take history as my evidence of any gods’ motivations, which shows us that, if anything, they are a petulant, childish bunch of spoiled troublemakers. And consider that if whatever gods there be have the Mother Teresas and Pat Robertsons and Barack Obamas and Glenn Becks to speak through, and they decide to send a mothman to talk to us, it just proves what a bunch of jackass practical jokers they really are…