In MOTHMAN, the eponymous man-moth returns to the small town of Point Pleasant to avenge a murder that has gone unpunished. And all cheap special effects break loose.

A group of Point Pleasant teens accidentally kill one of their own on a camping trip. Instead of alerting the authorities to what was a prank gone awry, they decide to make it look like the victim hit his head underwater and died – by taking turns bonking his head with a rock. Uhmm… is there no such thing as a Forensic Unit on this bizarro Earth these people hail from? They can figure out he was bonked post-death, you know. At least, that’s what they tell us on CSI: MIAMI.

Turns out, these kids must be expert bonkers for the Forensic Unit to just say F.U. to this particular case, and we jump forward ten years with not one of the teens implicated or incarcerated. We catch up with them at a bar, somberly toasting the ten year anniversary of that time at the –shhh– and the thing with the— shhh! 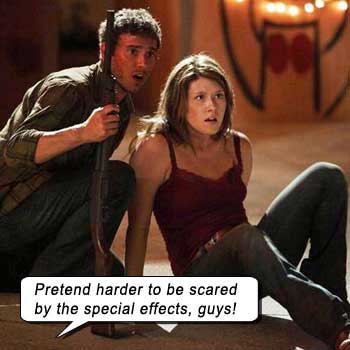 The Mothman chooses this anniversary to wreak revenge. (I guess ten years was enough water under the bridge before he got off his fat caterpillar arse and did something.) Mothy is supposedly the spirit of the tortured Chief Cornstalk, who became Mothman specifically to avenge wrongs – kinda like Batman.) He appears out of “reflective surfaces” and 86’s the kids one by one.

Frumpy-sexy cutie Jewel Staite (FIREFLY) is Katherine, who wielded a bonk-rock as stupidly as everyone else that fateful day. She left Pleasant to become a reporter in “the big city,” and has returned to cover the Mothman Festival, only to discover all her old friends dying mysteriously. An old blind coot (Jerry Leggio, who looks like Johnny Knoxville as BAD GRANDPA) tells her of Mothman’s revenge protocol. And it must be true because she reads his journal, which is composed of incoherent scribbles and drawings of Batman.

Now lemme get this straight: The Mothman is only doing something that should have been done by the courts anyway – putting to death six murderers who covered up their murder. Old Coot also states that Mothman kills people who deserve to die. Remember, Mothman started out as a wronged Native American, so he’s the spirit of a good guy to begin with. Why then, does everyone keep referring to him as “evil”?

Why is Mothy represented as a horrendous, black moth-creature that makes us root for the murderer because she’s got a nice padded caboose? And why does Katherine get to say to Mothy, “I’ve had just about enough of you” like a Hero, before she goes Sarah Connor on the creature with a pump action? Remember – SHE’S IN THE WRONG, and he’s the vigilante bringing justice to Gotham.

The six kids are not worth mentioning, except for Connor Fox as Derek, who is trying to get into Katherine’s nice padded caboose. They’re the two left running hand in hand from the “monster” – you know the trope – which means that by the end of the movie they’re an item. (Nothing gets you into a chick’s pants faster than running from a monster hand in hand.)

No one is taking this cheap SyFy TV movie with the lame efx very seriously, except for Johnny Knoxville. THE MOTHMAN PROPHECIES (with Richard Gere, 2002) was a sincere stab at eeriness, but this film (and many other ratbat imitations) are as far from that A-Movie as Richard Gere is from Johnny Knoxville. This movie’s ominous poster is ripped from MIMIC, and has nothing to do with the film. The story doesn’t make sense in its own world when the finale calls for Mothy to terrorize the town fair – waitaminute, did everyone in town kill someone and go unpunished?

And one day the Mothman will come for writers Sonny Lee and Patrick Walsh, and director Sheldon Wilson, for doing such a hatchet job on this film and going unpunished.