Almost – but not quite – Bennifer.

Idiotically tagged “Brangelina,” the publicity-romance dream team of Brad Pitt and Angelina Jolie explode in popcorn bedlam in MR. AND MRS. SMITH, as married super spies who are unaware that each other is a spy. 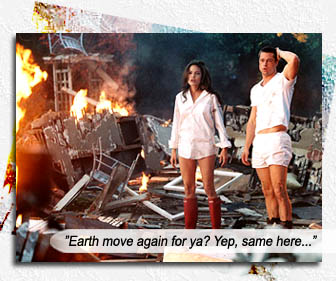 Ours is not to reason why, ours is but to popcorn and die – that’s how stupid this movie treats us. Employ the two hottest people in the world and we’ll just sit here and drool… never mind that they each have secret compartments stashed around their house, concealing weapons and money and neither of these supposed super spies ever stumbles upon the other’s stashes; never mind they hired actors on both sides for their wedding because they don’t have family ties and that neither of them were canny enough to discern this; never mind that when they are contracted to rub out each other we are allowed to see the WOMAN doing far more damage to the man than the other way round – and that’s meant to be “funny”… Never mind all that: look at those abs!… look at those ta-tas!

When both their spy agencies contract each of them to coincidentally take out the same target, Mr. Smith (Pitt) steps on Mrs. Smith’s (Jolie’s) death trap, leading to both of them discovering each other’s secret identity. Now the fun is supposed to begin. But it just gets annoying.

Both try to snuff each other while subsuming their wild sexual urges towards the other. Which leads them invariably to rough sex – in a house demolished by their feuding. The sex is so good (hey, it’s Brad Pitt and Angelina Jolie) they end up banding together against both their agencies. It is the annoying lopsided battle between the two which gives this film away as the half-baked, politically-gutless, emasculating popcorn-pleaser it tries so hard to be. And succeeds at.

She rams the side of his car and keeps driving, uncaring of whether she has killed him – now think about how incongruous that would look if the MAN was the aggressor. In the house-battle, she carries a giant automatic rifle, he uses a handgun. When she brutally smacks him to the floor, she can ask, “Who’s your daddy now?” – yet how “funny” would that line be if the tables were turned? Even when he does beat her in a basic fist fight, it somehow feels “wrong.” But in a society that applauds equality for women, why shouldn’t he be allowed to kick her ass with impunity?

By putting herself on his level – an assassin aiming to kill him – she has no recourse to call foul on anything. Yet the film-makers very consciously and carefully never show the female being bested. And when bested, in a trite, unthreatening manner. Why is emasculating a man “funny” but derogating a woman politically incorrect?

Because the asymmetry is so ingrained in our society that there would be an outcry if the female was topped in a “masculine” manner.  I’ve said this many times: women don’t want Equality – they want Superiority. Women seek to empower themselves at the expense of men, never to actually improve themselves on a truly “equal” level. And the only reason men allow women to be portrayed as “superior” is because men want to curry favor TO GET INTO A WOMAN’S PANTS.

That may sound even smugger than Angelina Jolie and her magical dancing ta-tas, but you can’t argue with Truth.

You lost me at burning your bra.

Speaking of which, in their last Butch Cassidy & Sundance sequence, his bulletproof vest covers his whole torso, hers exposes her midriff. Reason? Dunno, maybe none of the MALE assassins would think to shoot at that smooth, flat-bellied section of her body where they fantasize plucking grapes from her bellybutton with their tongues roving wetly over the smooth hairless flesh.

Sexism? That’s what funded this movie in the first place!!!