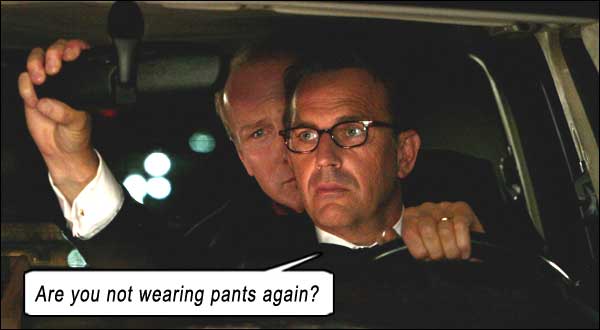 Serial killer. Not a sympathetic role, but in MR. BROOKS, Kevin Costner dives into the psychotic title character with a violinist’s verve. His killings are orgasmic; his planning, meticulous; his wife and daughter, oblivious. His alter ego, so well-defined it’s William Hurt.

And that’s why we love him so. Writers Bruce A. Evans (also director) and Raynold Gideon make Mr. Brooks (Costner) the Good Guy and his alter-ego the villain. Hurt is Marshall, the bestial, bloodthirsty voice in Mr. Brooks’s head, except he’s not in his head – both Mr. Brooks and we the audience see Marshall as a separate entity.

Denial, thy name is Displacement. 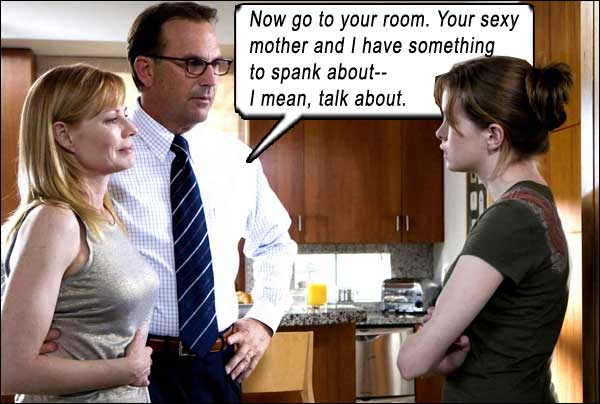 Efficiently – but for one thing. The drapes are left open. And a young photographer across the way (Dane Cook), who has been covertly snapping away at the young couple in Coitus Reversus Cowboyus captures Mr. Brooks in Orgasmus Killus. 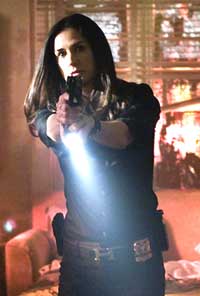 Next day, the photographer visits Mr. Brooks and – instead of the blackmail we think is coming – asks to be taken along on the next kill! Dane Cook (known for his goofball standup comedy and Idiot Boyfriend roles) seems an unlikely off-kilter headcase, but he does a reasonable job – not exactly inhabiting the role, always one exclamation away from blathering, “Oh God! I’m in a film with Kevin Costner and William Hurt!”

Speaking of miscast: Demi Moore, as a detective on the trail of Mr. Brooks. Her unnecessary backstory of a rich cop who just loves the job doesn’t help her credibility when we consider the most prominent example of this millionaire-funning-as-cop is from TANGO AND CASH.

Mr. Brooks attends AA meetings as if to pass off his psychosis like an addiction, admitting at his Meetings, “I’m an addict,” but leaving it at that, never “sharing” what he is addicted to, or how he is succeeding in subsuming his addiction.

The movie plays Mr. Brooks’s compulsion almost like a “disease”; like it can be explained away as snidely as that alcoholics’ excuse.

Costner also served in Eastwood’s magnificent A PERFECT WORLD, which asked the same thematic questions pertaining to crime: Nature or Nurture. PERFECT WORLD came down on the side of “Nurture” – his character’s anti-social nature in that film was molded by his environment. MR. BROOKS says the opposite – sociopaths are born, not made. We marvel at how Costner now plays the mirror image of his character in PERFECT WORLD, as clinical, controlled, and with as much conviction of his innocence as PERFECT WORLD’s molded misanthrope.

Add a dash of William Hurt psycho, and it is a guilty-as-first-degree-murder pleasure to see these two giants play off each other. 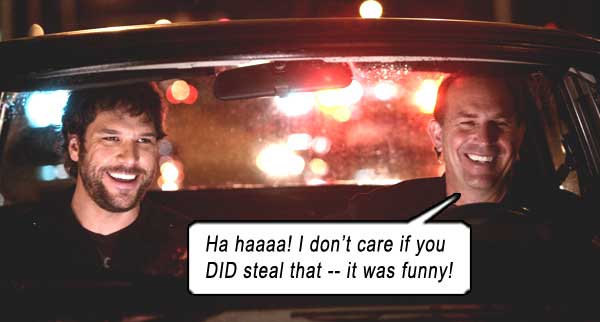 When Mr. Brooks’s daughter (Danielle Panabaker) returns home from college unexpectedly, Brooks discovers a dirty little secret about her that makes daddy kinda proud, yet annoyed that he has to employ his veteran psycho methodology to clean up the mess she has run away from.

The MPAA usually doesn’t let killers off the hook, so it is an unexpected pleasure to watch MR. BROOKS unfold to a shocking, yet satisfying ending. Two words: knife, throat.