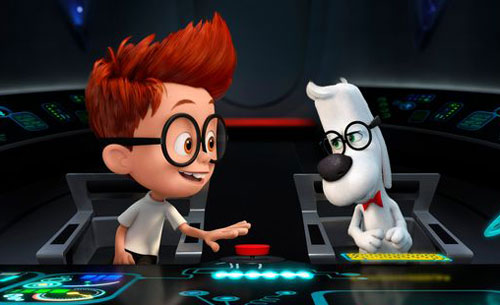 “You promise to spank me with a rolled up newspaper
if I hit the button again, Mr. Peabody?”

A Dogsbody and his Peaboy.

The voices sell it. This reboot of the 1960s cartoon (which was a segment of THE ROCKY AND BULLWINKLE SHOW called PEABODY’S IMPROBABLE HISTORY) would be nothing without the commitment of Burrell and Charles who, respectively, capture the wisdom and depth of Peabody and the wonderment and innocence of Sherman. Extra kudos to Charles who is actually the age of his cartoon avatar, yet his performance breathes like a veteran!

The premise of 1960’s MR. PEABODY & SHERMAN is the same here: Inventor Peabody possesses a time machine (called The WABAC Machine), which he and Sherman use constantly to travel back in time (on the pretense of teaching Sherman history by studying actual history), but they always end up interrupting some integral historical event, then have to correct it to save the space-time continuum. It also captures the dynamic between the two very poignantly, from Peabody’s didactic advice, to Sherman’s dutiful obeisance, to Peabody’s constant punning.

A creative montage of Peabody visiting past times, with Sherman growing younger in each scene, until we see Peabody finding Sherman on his doorstep, under Lennon’s Beautiful Boy. Sherman would always say, “I love you, Mr. Peabody.” Comes the formal reply: “I have a deep regard for you as well, Sherman.” Yes, we know: the redemption will come when the dialogue is reversed.

On his first day in school, Sherman meets blonde firecracker Penny (voiced by Ariel Winter, another youngster in a wise-beyond-years performance, with an impressive number of credits). [Let me sidestep here for moment to describe Penny. Yes, she’s a 10-year-old and this is a cartoon for kids, but does her cartoon mother really let her step outside with that much whore-mascara on? And fake eyelashes? Let’s be real, fellas: Penny is designed not just to appeal to girls her age, but to guys our age, with that Avril Lavigne come-hither appearance – or whoever is resident Barely-Legal-Playing-Seasoned-Whore these days, probably Miley Cyrus.] 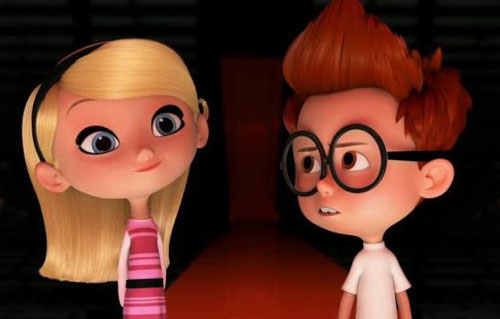 “Ahhh, a nice dark room where we can consummate our cartoon love.”

Penny’s first anti-social act is to bully Sherman until he retaliates by biting her. Like any seasoned whore, Penny reports him, complete with pics of the bite-marks on her arm and her innocent mascara’d face. Whereupon the Social Services battleaxe Ms. Grunion (Allison Janney) threatens to remove Sherman from the care of Mr. Peabody, because he is obviously raising Sherman like a mongrel dog. To smooth things over, Peabody invites Penny and her parents over for dinner. Hey, Penny’s father looks like Stephen Colbert — it IS Stephen Colbert! And look at those childbearing hips on mom!

Between running and flying and fencing adventures in Tutankhamen’s Egypt (voiced by Zach Callison), Robespierre ‘s France (Guillaume Aretos), Agamemnon’s Trojan War (Patrick Warburton), and Leonardo’s Italy (Stanley Tucci), accompanied by Danny Elfman‘s epic score, the first crack of cognitive dissonance appears in the story: Penny starts taking Sherman’s side against Peabody, and during an argument she remarks to Peabody, “If you’re such a good parent, why is Ms. Grunion trying to take Sherman away from you?” — Wait! What?!–

Recall it was PENNY’S LIE about Sherman attacking her that caused Ms. Grunion to accuse Peabody of neglect! Peabody had nothing to do with it! Yet the filmmakers (director Rob Minkoff and screenwriter Craig Wright) make him act as if he does! His retort should have been immediate, “Why is she trying to take him away? Because of your lying ass, ho!”

Later, when Grunion closes in on Peabody, Penny steps in. At last the filmmakers have come to their senses and are going to make the cute girl take the fall. BUT NO! Penny confesses, “Don’t take Mr. Peabody! This is my fault! I started it!” Her plea goes unheeded, because she never actually says “I LIED!”

Onboard the WABAC, Peabody forcefully tells a bickering Sherman to “Sit down!” Penny’s spin: “He’s treating you like a dog!” And Peabody is then written to bend to this arc, as he says he is “trying to become a better parent.” But Peabody is a fantastic parent! As evidenced by Sherman being so well prepared for learning that ignorant Penny bullied him in the first place! By the way, kids, Peabody is not telling Sherman to sit down because he considers Sherman a dog, it’s because running around like a headless asshole is going to get Sherman in deeper shit than he is in already! Writers, parents have their hands full enough. Do you want to send the message that when they righteously tell their annoying brat to “SIT DOWN!” that the brat should consider their parent is disrespecting their humanity?

All those – pardon the pun – watchdog groups that have a conniption every time schools teach evolution or a gay couple marries should pay more attention to these real insidious wrong-headed message vehicles.

MR. PEABODY AND SHERMAN succeeds as a comedy actioner, but fails as a heartfelt father-son story. Every historical figure is brought into the present for a grand finale that involves chasing and shouting and crashing and the space-time continuum itself, with Washington, Lincoln, Franklin, Einstein, Newton, Agamemnon and Leonardo all gagging it up in the big city. And not one kid is going to get that Kirk Douglas-as-Spartacus gag.

Peabody does eventually say, “I love you, Sherman.” Sherman replies in jest, “I have a deep regard for you as well, Mr. Peabody.” If this film had stuck with its historical elements and fish-out-of-water gags, maybe we too could have loved MR. PEABODY instead of just having a deep regard…

A smart dog with a stupid budget.

Though there are no marquee names associated with this production, its budget topped out at $145 million! On a cartoon! Jesus, what did they spend the money on? Hookers and blow? This is exactly the reason why mothers invented the saying, “Don’t you know children are starving in Africa?” Forget Africa, there are children starving HERE – the kids of all those studio employees who were sacked after this movie didn’t return its expenses.

2 Comments on “MR. PEABODY AND SHERMAN”