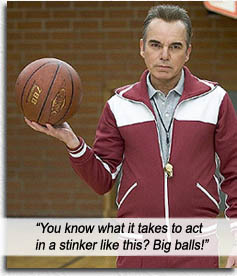 My recollection of the name “Woodcock” is from BUTCH CASSIDY AND THE SUNDANCE KID (1969) – Paul Newman, trying to convince the Union Pacific Railroad guy to open the train door so the gang won’t have to use explosives, flippantly pronouncing the name with that edge of dirtiness, “Hey, Woodcock! You can’t want to get blown up again!”

There is more humor in that one line from BUTCH CASSIDY than there is in all 87 minutes of this quarter-brain comedy.

MR WOODCOCK is BAD SANTA meets any Will Ferrell sports movie. Which means it’s Billy Bob Thornton in a comedy that really sucks. Thornton is psychotic phys-ed coach, Mr. Woodcock, who persecutes his schoolboy charges like a drill instructor, hurling insults and basketballs at them, stepping on them, making them do laps until they collapse – you know, like your old phys-ed coach from school.

Seann William Scott is a successful author, who used to be one of the nerds Mr. Woodcock bullied. Having channeled his angst and repression into best-selling self-help books, Scott returns to his small town, only to discover in horrror that Mr. Woodcock is dating his airheaded boiler mother (Susan Sarandon, sleepwalking through the role while Tim Robbins wasn’t looking). His quest: to break up the couple.

This is Craig Gillespie‘s second directorial effort. It shows. This is Michael Carnes‘s and Josh Gilbert‘s first writing effort. We can tell. Amy Poehler nearly steals the show. It wasn’t that hard to steal.