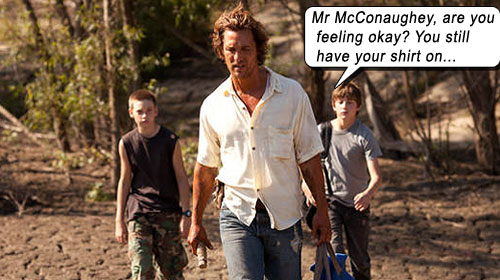 His name is Mud. And his name is pretty much mud. And the movie is MUD. Now isn’t that convenient?!

But MUD is not about Mud. He’s just a device to drive the story of young Ellis, who learns hard life lessons upon meeting him. Ellis is 16-year-old Tye Sheridan, and this movie belongs to him.

Matthew McConaughey is Mud, who opens the eyes of two young boys, Ellis and best friend Neckbone (Jacob Lofland), to lies, deceit and murder, when they meet him hiding out on an island in the Mississippi River. He tells them a tall tale about accidentally killing a man, about being hunted by vigilantes and the law, and about a promise to a lost love that he needs their help to keep.

Up till now, McConaughey’s down-home drawl has only ever been plausible for Klan grand poobahs and American presidents (I don’t know how he continued to get work without doctoring it), but for the first time, it fully fits his role as an Arkansas drifter. The role is gold for McConaughey.

Veteran McConaughey starkly treading outside his niche of blond-brained boyfriend might have been the focal point of this film if it weren’t for the inadvertent, unexpected sneak attack of Sheridan. With just one other acting credit (THE TREE OF LIFE, 2011), Sheridan brings a primal intensity born of Brando, Pacino or Hoffman in their youth.

Director-writer Jeff Nichols lets the young boys, Sheridan and Lofland, act like young boys, not like foul, precocious Hollywood creations; not too educated, not too redneck, curious yet naïve; these two talented, in-the-moment actors naturally call to mind River Phoenix and Wil Wheaton in STAND BY ME.

Reese Witherspoon, attired in High Trailer, is Mud’s shallow girlfriend, Juniper. Michael Shannon makes an eccentric appearance (in other words, just another Michael Shannon role) as Neckbone’s oyster-trawling dad. Sam Shepard is a houseboat neighbor, sharpshooter, acquaintance of Mud, who tells the boys to stay away from Mud, who would lead them astray. His warnings take on weight when Ellis steals a random motor for Mud’s escape boat – thinking it all a lark – until Ellis’s father (Ray McKinnon) chastises and humiliates him, making him aware of the ramification of theft: “You took that motor! It’s some man’s livelihood!” Ellis’s mother (Sarah Paulson) being a thief doesn’t help anyone’s argument for or against theft. “You’re just taking after your mother!”

And there’s Joe Don Baker! So slim! (AIDS? Cancer? Or the worst killer of all – old age?) A somber role as a patriarch who gathers a cadre of redneck dummies to kill Mud. In a dingy hotel room, he instructs them, “Let’s all take a knee; we’re gonna pray for the death of the man who killed my son.” Uh-oh: Jesus. That makes them really dangerous; not because Jesus is on their side, but because they think he is.

After hearing conflicting reports about Mud (“The man’s a born liar!” “From his point of view, being in the Marines as a sharpshooter makes me an assassin in his eyes”), Ellis still wants to believe that even if Mud is an unsavory man, his “love” for Juniper is something transcendent and untouchable. Ellis’s father instructs: “Love sets you up to be destroyed,” yet Ellis will not be swayed. When Juniper asks Ellis, “Why are you helping us?” he replies naively, “Because you love each other.”

His simplistic notion of love would be shattered when he spies Juniper flirting at a bar on the day that he arranged to spirit her back into Mud’s embrace.

The glutting reality of MUD is that Juniper and Mud are BOTH unreliable, itinerant, time-wasting sluts; you really don’t want to be around obsessive, deceitful personalities like these. She goes on sex jags, then goes running back to him; he seeks out the exes and beats them up, the last time, actually killing the guy, which is where we came in…

Movies extolling nuggets about love – whether they be romances, romantic comedies or dramas – always deliver both messages simultaneously: that love stinks and that love is grand! Many McConaughey movies do just this – GHOSTS OF GIRLFRIENDS PAST, FAILURE TO LAUNCH, or [insert any McConaughey romcom abomination] – with not the slightest hint of cognitive dissonance!

MUD seems too well constructed. Ellis is set up with a tentative love interest – who breaks his heart not five minutes after he discovers Mud’s girlfriend flirting. Ellis cusses out Mud for being deceitful and selfish, and one minute later falls into a pit of snakes, which precipitates Mud rushing him to hospital TRUE GRIT-style, proving his measure as an unselfish man. The beats just hit too conveniently, like a 2×4 payoff to the back of the skull. The movie’s sincere production, performances and stab at moral ambiguity elevate it above its many, almost insurmountable, plot conveniences.

After an action scene that seems forced, movie concludes on Ellis, proving it is his story, as it seems intent on illustrating to the audience that he won’t end up as damaged as Mud. Earlier, he had waved to his “girlfriend” and she had ignored him, bweaking his widdle heart. Now, he sees a young girl arrive at his hotel – she smiles at him – he gives a Clint Eastwood nod back, a shiver of a smile – he’s going to be okay.

With acting chops like this, you bet your trailer trash houseboat the kid’s going to be okay!