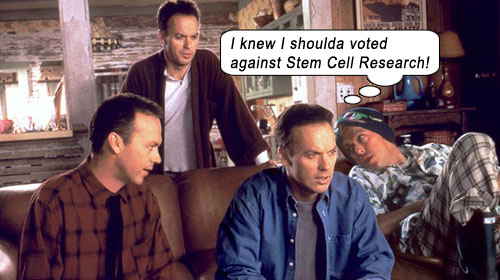 Keaton is Doug Kinney, so swamped in career and family life that in order to find felicity for himself, he creates a clone to share the burden of domesticity. But one clone turns into two clones turns into three clones… the complicity confusing his workmates, his wife (Andie MacDowell), and especially himself.

Keaton displays his magnificent multifaceted elasticity by playing every clone with a distinct personality – and never lapses or loses conviction in the four different archetypes. Keaton’s performances are so subtle, and work so well against each of himself, that we never notice how stunning his portrayals are; how much blood, sweat and CGI must have gone into learning his lines in a certain character and then playing off three other actors who would eventually be replaced by him – and playing off them four different times as four different types!

It is a jaw-dropping performance. Clone Number 1 (whom Doug calls “2”) is The Bruce Willis – the masculine side of Doug predominant; “3” is Doug’s feminine side predominant; when “2” clones himself to make “4,” it’s a monkey boy, because “you know how copies of a copy are not as good as the original…” Don’t bring analyticity – or it gets disturbing. So the movie never dwells on the cloning process or its moral implications. The only moral authority is Doug’s Rule Number One: “No one sleeps with my wife except me!”

Of course, one rainy night when Doug “1” is away, that specificity is not simplicity when Doug’s wife wants fluidity…

Keaton is in every single scene, yet because he plays the four personalities so convincingly, when Doug “1” spends so much time offscreen trying to stay on eternal vacation we feel like we’re watching three other guys playing Keaton playing Doug! We kick ourselves to remind us it’s Keaton onscreen IN PERPETUITY. The visual acuity – lighting and sightlines – is 95-percent on target, and as Doug’s clones build in their multiplexity, Keaton’s synchronicity with his multiplicity is ingenuity incongruity.

Directed by Harold Ramis, MULTIPLICITY is bound to be good gratuity from the get-go. Keaton takes it into orbital superfluity.

Ably supported by Andie McDowell and her strange accent, reliably confused in all the right places, as is the rest of the cast (Richard Masur, Eugene Levy, Ann Cusack), who feature minimally because Keaton is hogging all the screentime.

Message comes through loud and clear – having more of yourself doesn’t make life easier, but actually harder; multiplicity breeds instability. There are metaphors on top of metaphors: Doug had to go outside of himself to see himself; in discontinuity, Doug learns continuity; in promiscuity, Doug learns monogamy; in irresponsibility — I’ve lost myself in ambiguity…

After “2” clones himself, the real Doug yells without irony, “You can’t just go around cloning people!” Doubt anyone else could have pulled off these roles with as much electricity in their authenticity and eccentricity.

After all, there’s only one Michael Keaton!