This shot is for the laydayz!

An Ingenious Fantasy by a Fantasy Genius.

MUNICH is not about Munich. Nor is it about events which followed the massacre of Israeli athletes. It is about Steven Spielberg’s ego. And how far into Audacious he can drive it without becoming Oliver Stone. 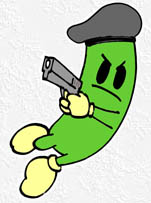 The tagline boasts, “The world was watching in 1972 as 11 Israeli athletes were murdered at the Munich Olympics. This is the story of what happened next.” Well, not exactly. It’s what author George Jonas, screenwriters Tony Kushner and Eric Roth, and film-maker Steven Spielberg think happened next.

MUNICH opens with a brutally graphic hostage-taking sequence, Palestinian guerilla group Black September killing and cudgeling the Israeli barracks into submission; news programs worldwide replaying that famous footage of the masked terrorist on the balcony we all remember watching obliviously as kids.

But before this sequence – four glib words: Inspired By True Events – simultaneously endowing the movie with faux import whilst granting Spielberg “artistic license”; in other words, granting him the impunity to lie off the hook. The source material for this film being solely Jonas’ self-admittedly uncorroborated book (Vengeance: The True Story of an Israeli Counter-Terrorist Team), makes this movie as much a fantasy as RAIDERS OF THE LOST ARK.

As Lew Wallace’s decorative details in Ben-Hur: A Tale of The Christ (1880) achieved “fact” status simply through their compelling documentation in a powerful work of art (for example, he gives names and a number – three – to the “wise men” who attended Jesus’ birth, his information culled from extra-Biblical sources, yet now regarded as “gospel” in every nativity scene, religious pageant and christmas cartoon, even though the supposed Christian source tome – the King James Bible – is devoid of those details), it is only a matter of time before Spielberg’s fiction will be regarded as doctrine if no further documentation – or less compelling dramatic enactments – of these events is made. (I doubt many people remember Michael Anderson’s SWORD OF GIDEON, 1986 – lesser movie, from same book.)

Eric Bana (still trim, taut and TROY-riffic from his last feature) is Avner, a Jewish family man and Mossad agent, called upon by Israeli Prime Minister Golda Mier (Lynn Cohen) to lead a covert team in blood-revenge for the Munich massacre. Much is made over Mier’s rationalization of morality – every MUNICH reviewer revels in flaunting her line – yet Mier only verbalizes (euphemistically, at best) how every individual behaves in every situation they encounter – by “negotiating compromises with their own values,” i.e. using “circumstantial morality.” There is no Kantian “outside morality”; it is all Nietzschean nihilism. Truth cuts to cure. Was it not blood retribution that George W. Bush called for (admittedly less articulately) in retaliation against September 2001’s terrorist attacks? Did not America rally behind him like maniacal rednecks out for Middle Eastern blood?

Where was your morality then, Christians?

More intriguing than morality conundrums is the mindset that would allow a person to pawn themselves out to a government who admit openly that it will deny your existence – and probably try to make you truly non-existent – simply for performing a duty for your country. (Maybe the government stance on anyone sociopathic enough to accept its “uncivilized” assignments in the first place, is to summarily excise those unbalanced personalities from society.) Whether the vengeance squad questioned the morality of their actions is speculation, and is a storytelling staple akin to anthropomorphizing animals: to add dramatic flesh to the plot and to better identify with the characters – but can people who enter into such one-way self-sacrifices be understood or “humanized” at all? Spielberg shies away from these issues (which are intrinsic to a story of this nature, as it may cast light on the motivation for both predators and prey). The film is already dark – how scary could one more layer of darkness be? 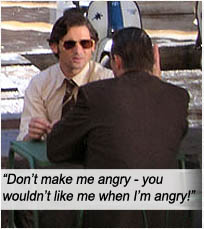 Avner’s team, four misfits from various middle-class walks of life, includes Robert the toymaker-turned-bombmaker (Mathieu Kassovitz, bearing a disturbing resemblance to Arnold Horshack), who pulls the short straw to perform the first execution with Avner. In a flustered scene, their hesitancy at pulling the triggers whilst facing their target – questioning the target insistently with no defining answers – illustrates that even with purchased “intelligence information,” Avner still has deep-rooted doubts as to whether their targets are the actual terrorists. But again, we must ask: when the original Mossad agent dictated his tale to George Jonas, did he merely add this trait to his personality to humanize himself? Or did Jonas add this element to elicit sympathy for the “heroes” exacting revenge – for without this hesitancy in killing, wouldn’t that make them as evil as the terrorists they were executing?

Constantly asking for “more evidence” from Ephraim (Geoffrey Rush, as an evasive government liaison), Avner’s resolve at keeping his actions meaningful eventually deteriorates after more killings, finding him negating his emotions and insouciantly extolling his duty to wipe out even the more ruthless replacements to their killed targets.

Amongst the furor of malfunctioning bombs and shootouts gone awry, Spielberg, as is his familial wont, interjects with paternal themes: not only is Avner a new father (Bana wrenches a brilliant tearful moment when he hears his daughter’s first “dada” over the phone), his European intelligence source is an underworld kingpin simply known as “Papa” (surrounded by tranquil gardens and frolicking children, yet exuding a dangerous serenity). Another Spielberg trademark does not come off as suavely: seeing through his now-transparent ploy of imperiling children with no payoff, dilutes the intensity of a sequence involving a girl-child and a booby-trapped telephone. Oh, the unmitigated zero suspense.

There is a sex scene disguised as an assassination (Avner’s team kill a female assassin who tries to seduce them into sparing her life), and an assassination disguised as a sex scene (after his return home, Avner finds that in his most intimate moment with his wife, he is flashing back to the grisly hostage assassinations); two scenes which conjure roiling, visceral emotions in the viewer, Spielberg artfully leading us to question whether we should be turned on or turned off.

Avner’s operatives complete 5 of the 11 killings before the movie – and, we presume, the piecemeal intel the real-life assassins had to work with – runs out of steam. MUNICH’s powerful performances, masterful cinematography, storytelling and direction are tempered by its slipshod conclusion, which leaves no resolution to the storyline (supposedly “true,” so left dangling and expecting forgiveness), and a hundred rhetorical questions in its wake: does retaliation benefit economically or politically at all?; how does a retaliatory individual or nation return to their former steady state?; will Arnold Horshack ever graduate?…

Spielberg takes great risks in some of his movies (SCHINDLER’S LIST, AMISTAD), in others, no risk at all (INDIANA JONES AND THE LAST CRUSADE, JURASSIC PARK). In MUNICH, it is a potpourri of both, the woman exposing herself for sexual mercy is a risk, the child answering the phone is not; one of the risks is “revenge killing” but he palliates the risky concept with a “non-risk” by having both predators and prey in MUNICH sport indeterminate Middle Eastern accents, assuring no alienation to his Stateside countryfolk, with ruffled feathers belonging only to pundits unimportant to the funding and distribution of the film. Israel’s consul-general, Ehud Danoch, has already lambasted the film as “problematic” and “superficial,” which is understandable, for if Israelis were to accept the film as “truth,” it would involve advocating “revenge killing” – and we KNOW that governments don’t ever play that card (wink wink…). Minority groups and outsiders to the Hollywood system could whine over unfair depictions, but their picketing of theatres and seeking of reparations would only lend impetus to the film in the western-dominated avenues where it is slated to reap its income.

Anyway, after the bloodlust directed at all Middle Easterners in the aftermath of 9/11 (in such an arbitrarily juvenile manner that Public Service Announcements had to be aired actually describing the ideological, religious and national differences between foreigners of Middle Eastern descent), how much does White America really care about Arab nations assailing each others’ jugulars – in a world INSPIRED BY STEVEN SPIELBERG?