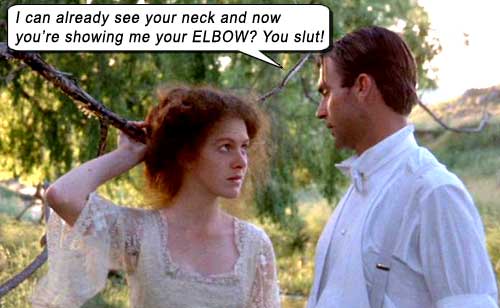 Near the turn of that last century (1897), a young girl from a poverty-stricken family in the Australian outback dreams of being a writer, against the wishes of her family, and against the inculcation of a society that believed every woman should be aimed toward marriage-sans-career because “Marriage gives us respectability, dear” (her retort: “That’s just what men want us to believe!”). In those days, a married woman was altogether forbidden to even seek a career outside of shoeless in the kitchen with three kids.

MY BRILLIANT CAREER made superstars of director Gillian Armstrong, actors Sam Neill and Judy Davis. Its international acclaim was well earned, headily capturing the sights, lifestyles and vernacular of the Australian bush, from the super privileged to the scraping by (and I love that all the pianos are so authentically out of tune!). Based on a fanciful novel by Miles Franklin, Judy Davis plays young aspiring musician/writer Sybylla with all the fiery spunk that would draw many suitors to her like moths to a flame, only to be turned away by that same fire that desired so much more out of life.

After her family surrenders her to a rich aunt, after she does nothing but chores around farms and acts as governess to a gaggle of urchins, after she spends most of the movie mooning over one suitor’s affections, we cannot fathom exactly what Sybylla’s “brilliant career” is. In the film’s last scene, we see her posting a manuscript while greeting the new dawn on the horizon. How metaphor-ey. In real life, the book My Brilliant Career was published in Edinburgh, Scotland in 1901, so are we to presume, from the movie, that her brilliant writing career started by writing about her mundane home life? Stranger things have created superstars…

Strangely enough, I can relate to a book being nothing but well-written anecdotes, as I recall one of the first books that jolted me into enjoying “writing” was George Johnston’s My Brother Jack (1964), a stormy recounting of a young boy’s coming of age in suburban Australia. It was nothing more than anecdotes of home life, but it was so well written it was compelling, inspiring. From that point on, I strove to string words together that would be more entertaining than the average emgalla.

Sam Neill is Harry Beecham, the foremost of Sybylla’s suitors, so young and angularly handsome, I’m sure he made a “brilliant career” of bedding Aussie wenches across Australia after this movie. Sybylla continually rejects Harry’s advances, claiming she wants to be ensconced in a career before they wed, or date, or whatever it is they desperately want to do with each other’s bodies (expressed in displacement gestures like pillow fights and ribald waltzing). Yet she spends most of the film mooning over him, playing childish jealousy games; playing him off against proper Brit Frank Hawdon (Robert Grubb), who woos her in the “correct” fashion, yet is also declined.

You will never see Judy Davis so youthful, red locks exploding like lava down her back, the precursor to the lubricious look of Nicole Kidman in FAR AND WAY (1992). When she eventually embraces Harry like an adult, it is too little too late, and it is slightly jarring how she takes on a new personality; a mature womanly mettle that seems a little forced.

After Harry leaves to seek his fortune and returns seeking her hand, Sybylla still maintains, “I want to be a writer,” which is now just turning into an excuse not to touch his penis. When any movie devolves to a guy begging a woman to marry him – as Harry does – it becomes a little too emasculating for my emgalla. Yet we can understand her reticence – a woman’s lot in those days was just slightly above slave and slightly below draft horse – and marriage was merely a business proposition that fortified a man and disenfranchised a woman. When her aunt chides her to marry stodgy Frank because he is heir to a fortune, Sybylla retorts, “I don’t love him,” and the aunt’s reply is emblematic of the era, “That’s got nothing to do with it.”

We feel poor, loyal Harry’s frustration by movie’s end; unresolved, blue-groined. I know you’re one of the new wave of liberated women Sybylla, but was there no way you could have assuaged Harry’s pining? I mean, in these old fashioned times, isn’t it about time you invented the Old Fashioned? I hear a lot of ladies make a brilliant career of it…