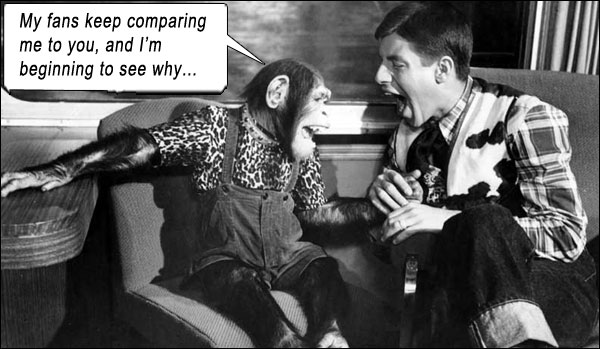 Dean Martin and Jerry Lewis once again make a B-movie watchable. But only just.

In MY FRIEND IRMA GOES WEST, the gang from the first IRMA aim for Hollywood, end up in Las Vegas, and are still barely watchable. Honestly, I don’t know why Paramount Studios insisted on a sequel to the execrable MY FRIEND IRMA (1949). The only two things that were good in that movie were the B-characters played by Martin and Lewis. And one would think that producer Hal Wallis (specifically breaking Martin and Lewis as a filmic comedy team with that movie) would want to showcase them as the stars of their own movies as soon as they proved themselves such a potent force.

Instead, we get Diana Lynn and Marie Wilson reprising their starring roles as Jane and Irma respectively, once again in a disjointed story that loses all focus on its title character and gives equal, if not more time (and definitely more important plot developments) to the second-billed Martin and Lewis, as Steve and Seymour. 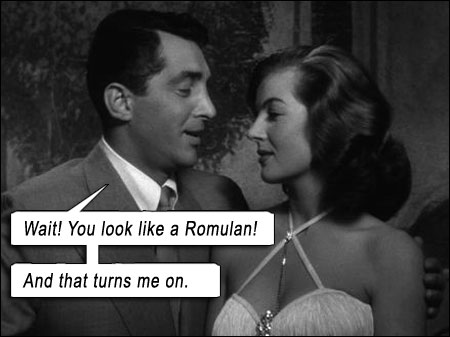 Notably, whereas Seymour was definitely the fifth wheel in the last film, here he is entrenched in the plot as Steve’s buddy, and John Lund as Al (who is top billed on both IRMAs) seems to be the interloper. Lund’s grifter character, who is always working the angles to be Steve’s showbiz manager, seems like he is working those angles just to be relevant in this film.

GOES WEST opens with Diana Lynn’s monologue on her hometown of New York, citing the many boroughs and streets and attractions – and I can’t help but reminisce about what is to come for Martin and Lewis, who would become the Kings of New York soon, and in the same manner of this monologue, sing Every Street’s A Boulevard in LIVING IT UP.

Steve gets signed by a Hollywood producer, and told to Go West – travel to Hollywood – with his whole retinue (pal Seymour, fiancé Jane, her roommate Irma and Irma’s boyfriend Al). As the gang spends their cash on train tickets and living it up, thinking they will present an expense account to the producer when they arrive in Hollywood, we discover the producer was an escaped asylum inmate. (That plot point was used a lot back then, wasn’t it? An escaped mental patient causing misunderstandings with their masqueradings. What was it about the lackluster security at mental asylums?)

So the gang is as skint as ever, stuck on a train to Hollywood. Al inadvertently gets in deep with the mob, which results in Irma’s kidnapping, and Seymour’s rescue of her.

The plot focuses on Steve’s burgeoning showbiz career, mainly because Jane is laser-focused on having her man be a wild success. She is once again written as a shallow gold-digger who doesn’t want to just be married – she wants her spouse to be able to afford an apartment on Park Avenue. And here’s the strange thing: I don’t think the writers, Cy Howard and Parke Levy, were being insulting to her, but just flowing with the tenor of the times, where a woman’s laudable ambition was to marry a man of wealth, rather than to seek a career of her own or even be independent. 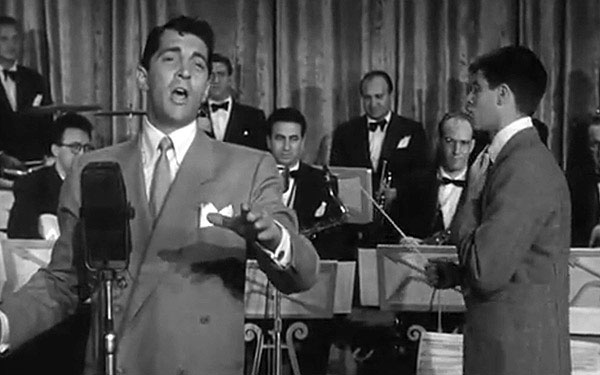 The ham and the cheese in the sandwich of comedy.

Throughout GOES WEST, director Hal Walker allows Martin and Lewis their space, to once again steal the show, with their many comedy skits and musical numbers, GOES WEST marking the first time onscreen they perform their renowned nightclub shtick of Dean attempting to sing a number while Jerry conducts the orchestra (Singing A Vagabond Song). No movie can quite convey how this unique, frenetic shtick was received by the audiences of the day, as we see Steve and Seymour do the bit on live TV – their timing is impeccable, the jokes rapid-fire, the slapstick inimitable, the whole package an hilarious shot to the sternum – while their television audience simply watches without laughing, because the bit is meant to be an “intrusion” into Martin’s song. So are we meant to believe the studio is broadcasting this singer trying to get a song in while being trolled by an ass-klown, without either cutting away to a commercial or just having security throw the bums out? 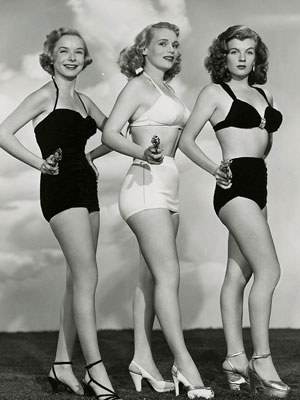 We see the Martin and Lewis timing has sharpened to the point where you could hold this performance up against any one of their later films. Both their roles (as romantic lead and monkeyboy) have been honed since their debut in IRMA, a credit to their learning curve and aptitude as master entertainers.

When looking over the whole Martin-Lewis catalogue, it’s ironic that in these early films where there was actual love between them, Dean’s characters acted so mean-spirited towards Jerry’s, and in their last few films, when we knew Dean actually couldn’t stand Jerry in real life, his characters came off as sincerely supportive of Jerry’s.

Steve meets French bombshell Yvonne Yvonne on a shoot (Corrine Calvet – a rising Hal Wallis protégé, meaning he was using this IRMA vehicle for her in the same way he was using it for Martin and Lewis), who throws herself at him like a baboon in estrus, which causes those typical 1950’s romantic misunderstandings with Steve’s fiancé. I mean, what sort of pheromones was this guy meant to be exuding?

Speaking of baboons, they set Seymour up with Yvonne’s cute little chimpanzee. (Jerry referred to himself as the “monkeyboy” around Dean’s smooth ladies’ man, so this was an apt pairing, as they play cards and mess about.)

And speaking of chimpanzees, Marie Wilson still plays Irma as ditzy-bordering-on-retarded. Every line of hers to Jane is non-sane stupidity! This is not the idiocy of Jerry Lewis’s characters in any of his films. This is true imbecility where we wonder how a person with such a level of incognizance can ever function in society. I have never heard the very successful My Friend Irma radio show (Marie Wilson voicing that character from 1947 to 1954), but this clueless movie iteration of Irma is insufferable. 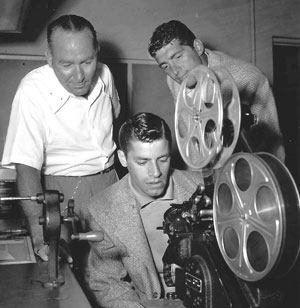 On the set with producer Wallis. As far back as their second non-starring film, Jerry already learning the ropes of his craft…

Thankfully, Diana Lynn as Jane makes up for the annoying Irma by being such a spinner cutie. Really, where did they find these women with waists so slim you could hold them in the palm of your hand? During the climax, when a posse is organized to search for kidnapped Irma, Jane refuses the Sheriff’s advice to stay out of it. “No man can hold me back when it comes to my friend Irma! Give me a gun!” And he just hands her one over the counter.

Seymour dresses as an American Native to track Irma down, complete with warpaint, breechclout and – reddened skin? The film is black and white, so I can’t quite tell. But I think that’s racist, no?! That was America 1950. (And Middle America 2018.)

Seymour exhibits some uncharacteristic bravery (for a Jerry Lewis character) in saving Irma by sneaking up on an armed kidnapper and laying into him!

GOES WEST plays on the well-known maxim, “Go west, young man, go west” (attributed to John Babsone Lane Soule), implying starting a successful life afresh in the virginal West, removed from the clamor of life in the East. It then plays on the pitfalls of believing that myth. The characters of Irma and Jane would not see another filmic incarnation, but would continue on radio and apparently have a very successful run as recognizable media darlings in the 50s and 60s, while this movie would be the last featuring Dean and Jerry as second-stringers, their career actually starting afresh, going on to become the greatest comedy duo of the age.