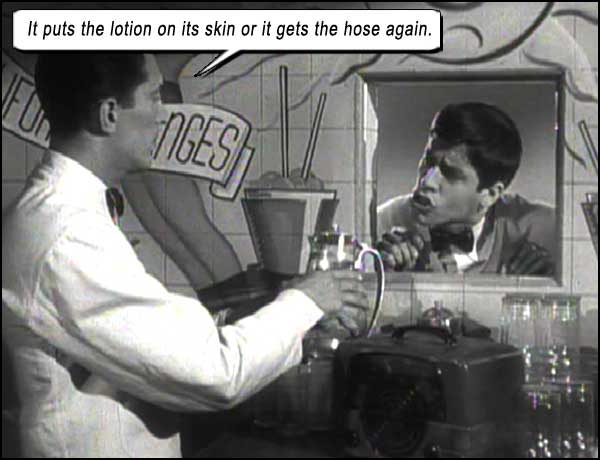 Thus it begins; with an innocuous “and introducing” credit in MY FRIEND IRMA – the comet-across-the-skies film career of the comedy team known as Martin & Lewis.

Dean Martin (born 1917; 32 years old at the time) and Jerry Lewis (born 1926; a strapping 23 years old, nine years Dean’s junior, yet a veteran entertainer) were already big stars as a team on the nightclub circuit, radio and TV, and producer Hal Wallis wanted to find a suitable cinema vehicle to expose America’s “highest paid act in show business” to the moviegoing public. With this inauspicious turn as supporting characters in a movie adapted from a radio series, about a ditzy female and her roommate, Martin and Lewis would not have the industry breathing down their necks for a hit, the fate of the picture not resting on their shoulders. How gauche then, to steal the show…

In this goofy female-driven comedy, Irma (Marie Wilson) is the well-meaning but airheaded roommate of grounded Jane (Diana Lynn). Irma’s boyfriend is grifter Al (John Lund), always looking for a way to make a quick buck. Al finds his means in crooner Steve (Dean Martin), who works at a juice bar with his high-pitched, high-strung pal Seymour (Jerry Lewis), offering to manage Steve on the nightclub circuit.

The tale is told from the point of view of Jane, the plot revolving around Jane trying to land a job as secretary to a millionaire (Don DeFore) in order to seduce him, marry him and live the life of Melania. In other words, she’s a gold-digger. It’s 1949, and that’s the highest aspiration a woman could have: marrying into money. But Jane falls for penniless Steve because, apparently, chicks dig rock stars. Who knew? 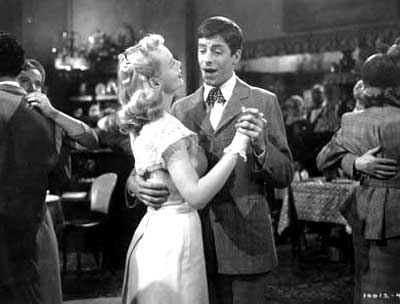 MY FRIEND IRMA is an awkward movie. Directed by veteran George Marshall, written by Cy Howard and Parke Levy, it lacks a cogent direction, as it is trying to tell the tale of the females, while shoehorning in Martin and Lewis. It’s a comedy-musical, with Marie Wilson as Irma doing a female version of the goofy klutz (that Jerry Lewis would perfect in a much more studied manner in upcoming years), and John Lund as her scheming boyfriend Al, a completely unnecessary widget to the story. It’s strange to think that Jerry first auditioned for the part of the creepy, unprincipled Al (and failed to impress the filmmakers, even though he wanted the semi-dramatic part badly), but eventually writer Howard wrote in the new character of Seymour, because Jerry was advised to be the comedic character he played onstage.

For cultural reference in American comedy: while this movie unspooled, Laurel and Hardy, and Buster Keaton, were a long time ago (1920s), the Marx Brothers had just retired, The Three Stooges were lowbrow TV slapstick, and two other comedy teams were contesting Martin and Lewis’s primacy – Abbott and Costello, and Hope and Crosby. (London-born Charlie Chaplin was an established force in American comedy since the 1920s, and would be a major influence on Jerry, though Chaplin’s silent heyday had past.) By 1949, Bud Abbott and Lou Costello had already made 24 films as a successful duo, however their popularity would diminish with the rise of Martin and Lewis; while Bob Hope and Bing Crosby, each having made numerous solo films at this point, were on their way to the sixth of their seven successful Hope-and-Crosby ROAD films. Now Martin and Lewis would start a film run that would shake the American comedy tree with bone-rattling intensity…

While the other characters dart about onscreen in IRMA, we know they’re trying for comedy, but they’re using that old theatrical style of acting and punchlines that Martin and Lewis ripped apart in their live shows. Irma is too incognizant and Al is too slimy to be funny. DeFore (the millionaire) is meant to be suave leading man material, but will end up playing B-characters in subsequent Martin and Lewis films. And Jane is too annoying to be anything.

You see, Jane is written with that ingrained sexism that was a feature of all movies of this era. Her dream job is to become a secretary – and she only wants this job because her boss (DeFore) is “dreamy”! Then smooth Steve gets under her skin so she starts doubting her resolve to “go for her goals” – her goals being to follow through with a loveless marriage to a rich guy!

Jane says to Steve, as he woos her, “I wouldn’t want you to think I was a gold-digger. It’s a question of wanting something and going after it. And if you’re going to marry, it might as well be a somebody instead of a nobody.” Yeh, uh, pretty much the textbook definition of a gold-digger.

In one scene, Jane cries inconsolably on her bed lamenting, “When I finally hook a millionaire and I’m ready to reel him in, I have to fall in love with a guy who hasn’t even got enough money for rent!” So you are fully cognizant of your plan being devious, devoid of love and purposefully gold-digging?! But why are you weeping so? If you DO value true love over scheming avarice, the choice should be easy – Steve! But you weep in distress because you PREFER the enabled lifestyle that you will have to give up if you choose Steve. In other words, you LOVE being a gold-digger and are wondering how to reconcile yourself to a life of poverty.

But then, no one really cares what these two chicks are up to (at least, I don’t); MY FRIEND IRMA is merely an academic exercise in observing the beginnings of the film legacy of Martin and Lewis. 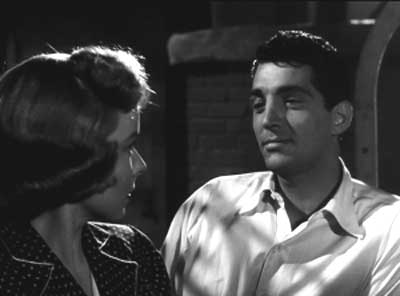 No woman can resist the smooth taste of Brylcreem.

If you watch this movie after the classic Martin and Lewis pairings (SCARED STIFF, LIVING IT UP, ARTISTS AND MODELS), you will notice their timing a tad slower, their routines less crackling with energy. It’s still miles above the other theatrically-trained actors who stand facing the fourth wall and deliver their lines, but it’s noticeably not up to par with their later efforts. And Jerry doesn’t have that buzzcut yet. He says in an interview that as soon as someone mentioned how “cute” he was, he cut his hair, because there was room for only one cutie on their team, and that was Dean; Jerry’s role was “monkey.”

These old movies: how they gave our parents the wrong impression of courting and love and fidelity. And fashion. Steve says “I love you” to Jane after three days of sleeping on her couch (because he’s penniless, remember), and Jane is portrayed as a “good girl” because she ultimately chooses penniless Steve. Because – true love. And in this age of pointy bras, Jane is so flat that the producers don’t even bother making her wear one (she’s got those chest buds like Hermione in the third HARRY POTTER movie), although we get to gawk at both her and Irma in (vomit) petticoats, where we are surprised to see Irma sporting a bangin’ caboose!

The movie’s resolution is not even satisfying because we don’t care (at least, I don’t) what happens to Irma (who was threatening to kill herself, but ends up marrying Al, even though he’s still an unrepentant conman – what’s the message here?!); no one caring whether Jane chooses Steve or her millionaire (who meet and punch each other in a failed attempt at farce), or whether Al gets-rich-quick (as he pretends to be Irma on the phone to win a song contest). Well, Irma comes crashing in and identifies the song: Buttons and Bows. They ask, “Who’s the singer?!” As if to remind us of the old guard being replaced by the new kids on the block, the singer is…