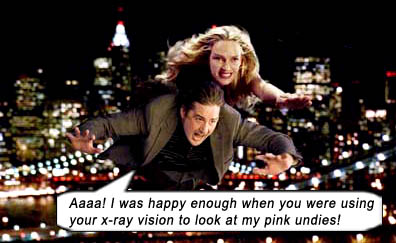 MY SUPER EX-GIRLFRIEND has Ivan Reitman (GHOSTBUSTERS) directing, a solid comedy writer from THE SIMPSONS, Don Payne, Rainn Wilson at the top of his game and Eddie Izzard at the middle (though still attaining the standard of low-bar American comedians); it also has Uma Thurman looking hot – as a super heroine AND in her severe, clinical Clark Kentress alter ego skirt. But the film belongs to Luke Wilson.

We have to believe that Wilson’s average red-blooded American male can hook up with Uma’s superchick, break up with her, then take all her high maintenance super revenge in stride. Wilson’s every reaction is gold.

Architect Matt (Wilson) falls for the bespectacled, secretarial Jenny Johnson (Thurman), who reveals she is the resident New York superhero G-Girl (basically a retread of Superman with tits). After a few weeks, Matt realizes Jenny/G-Girl is clingy, jealous, irrational and emotionally unstable (you know, just a regular chick), so he dumps her in favor of his spunky co-worker, Hannah (Anna Faris), who has been coming onto Matt overtly by monopolizing all his sightlines in tight black dresses with NVP (No Visible Pantyline).

And Jenny’s revenge is – as one can guess – super nasty.

It’s a very funny movie – even WITH the double-standard woman-empowering out of control. I think this is the first time on film we are seeing this aspect of a superhero-layperson relationship. Super folk tend to be sensible and honorable enough never to use their super powers against normal folk in revenge (unless the normal folk are villains). But here is vengeance heaven for whining ex-girlfriends; we see a female super hero actually behave like any normal high maintenance byoch.

There is shark-throwing and bed-breaking and cars thrown in space, but those aren’t the funny bits. The humor flows from the details: Rainn Wilson and Luke Wilson play off each other like a pair of well-oiled bromantics and their chemistry never flags; Izzard is succulent as usual as the suave supervillain, Professor Bedlam; Thurman pulls off her touchy role without making us hate her; and Anna Faris gets to use more than her one facial expression by redirecting our attention to her bodacious booty.

Don’t watch with your girlfriend. It’ll only give her ideas.