The science of silly.

I think it was TIME OF THE APES. Or one of the GAMERA movies. Circa 1993. I was channel-surfing and came across some car wreck of a movie, and, like every good rubbernecker, slowed down to see if there was a decapitated head in the street. 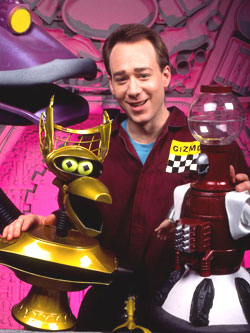 Before long, I realized there was a secondary audio track – disembodied voices were making comments about the movie… funny comments. Then I discerned silhouettes at the bottom of the screen: a row of movie seats and three figures seated in the farthest right seats, the middle figure decidedly human, flanked by strange-shaped objects (puppets? machinery?) who were doing all the commenting.

Then these figures came “out of the theater” for a “host segment” in which they did something incredibly dumb yet intrinsically smart, on what looked like a budget of $2.75. There was Joel Robinson (Joel Hodgson, decidedly human [Joel voice: “Or was he?]), a robot (or “bot”) styled after a gumball machine, named Tom Servo (operated and voiced by Kevin Murphy), and a spindly, golden bot named Crow T. Robot (Trace Beaulieu). (By the way, the ‘T’ stands for ‘The’.)

Joel’s a janitor, trapped against his will in the orbiting Satellite of Love by two mad scientists from Gizmonics Institute (Trace Beaulieu as Dr. Clayton Forrester, and Frank Conniff as TV’s Frank). They send him cheesy movies. The worst they can find. Joel has to sit and watch them all, and they monitor his mind (la la la). At least, that’s what the theme song says (la la la).

I had discovered MYSTERY SCIENCE THEATER 3000. And my life changed forever. 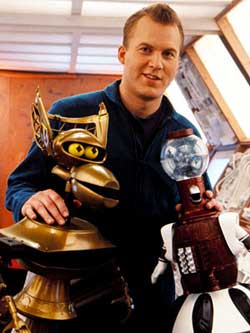 To ease the pain of being forced to watch bad movies, Joel and the bots “riff” on the movies (an endless stream of satire, sarcasm, snipery and cultural references). That’s the hook. There’s not much more to it. We all do this while watching movies, or TV, or a game show or documentary – anything. Joel parlayed talking-at-the-screen into a lucrative cult phenomenon. The genius of any idea is in its simplicity.

Later I would discover I was watching a rerun. The first season of MST3K (as it’s known to its legion of worldwide fans, called MSTies) was aired in 1988. Each episode being two hours long (full-length B-movies), it was astounding how the show skyrocketed in popularity to the point where Comedy Central would air reruns every weeknight, with a one-hour half-episode during prime time, and a new episode every weekend!

What drew me to this offbeat indie circus? Firstly, the team was from Minneapolis (Jim Mallon, Michael J. Nelson, Mary Jo Pehl, Bridget Jones, Patrick Brantseg, Paul Chaplin, Jef Maynard, et al) and it showed – like the seams on their shoestring budget production. It was so enticingly NOT Hollywood (proven by the fact that year after year, even after Joel left the production, his name would remain as the first credit “Created by Joel Hodgson” – whether it was Joel’s canny stab at contractual assignation or not, the fact that lawyers could have easily removed it as the first credit, if not altogether, after his exit, proves the fierce loyalty of his fellow crewmates). Then there was the on-camera chemistry of the three principals – sleeptalking Joel, crusty Crow and tomboisterous Tom with cute little hands that didn’t work. Mostly, it was the way MST3K gave me hope that not all of America was DUMB: the jokes run the gamut from fart noises to references of Jean-Paul Sartre. Thousands of jokes per episode, cannoning at us like buckshot. Not all are winners; what you find funny, others will not, and vice versa, in this smorgasbord of knowledge and culture and raw stupidity.

Over the years, the dynamic would change, as cast members were replaced. Much like Deep Purple, MST’s greatest lineups were Mark II and Mark III. In Mark II, the talented Kevin Murphy replaced the brick Josh Weinstein (from Season One and the plodding KTMA episodes) as Tom Servo. And Frank Conniff replaced Weinstein’s character as assistant to Dr. Forrester. (Poor Josh. As a comedian, he made a great Data Entry Analyst. The guy had no timing. He was witty, and some of his riffs ran along the intellectual lines that come fluidly to Murphy, but he lacked energy (some of this could be attributed to the newness of the show) and a likeable stage presence, in human and robot form).

Mark III consisted of Mike Nelson replacing Joel alongside the two bots. (Much like fans argue over KISS guitarists, the contention continues to this day over who is the better/cuter human host.)

MST3K ended with Season Ten, with none of the original cast, but with a herculean riffing verve that could not be matched by the earlier episodes. By Season 6, Mike and the Bots had found their stride, and the Season Ten quality was exceptional. It was crushing to see the show eventually cancelled after such a long, glorious run.

Nelson, Murphy and Bill Corbett (the last Crow) would continue online with RIFFTRAX, giving modern A-movies the thrashing they deserve. After trying to find support for his innovative TV WHEEL, Joel would continue his riffing with a show called CINEMATIC TITANIC.

Sometime after Season Six, MST3K transcended the small screen and made the leap to feature film. It doesn’t really warrant perfumed trumpets and blaring roses. It’s the same TV format with a bigger budget, meaning the sets are swankier, with a constant wink to 2001: A SPACE ODYSSEY – we even get to see Tom’s bedroom! – and they’re shooting on film instead of on the entrails of some guy’s llama. 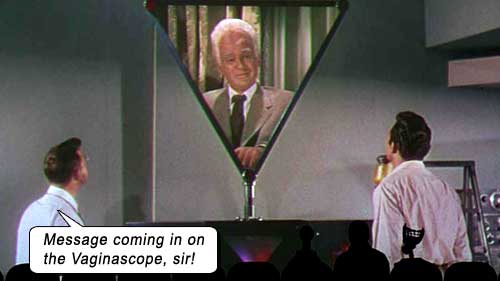 THIS ISLAND EARTH would be the B-Movie that Mike and the Bots would have to suffer through and eviscerate. Filmed just after Frank’s departure, it is sad to see Dr. Forrester alone in his lab – we keep expecting Frank to pop up and be irretrievably stupid just for old times’ sake. Poopie!

MYSTERY SCIENCE THEATER 3000: THE MOVIE is no better or worse than the scores of MST3K episodes from the Comedy Central vault. Which means: shitty film garnished with excellent jokes – nothing that a devoted MSTie hasn’t experienced before.

So it’s hard to rate or describe something so excellent yet so culty. Either you get it, or you don’t.