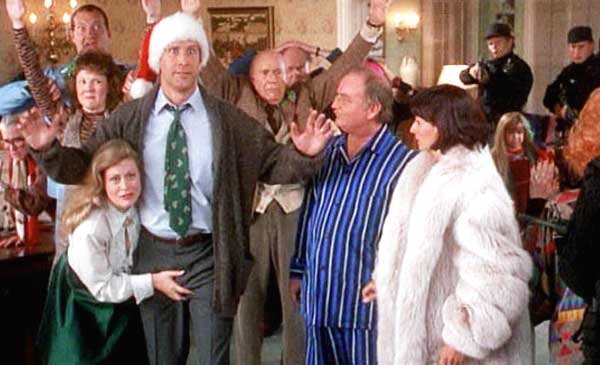 Beverly D’Angelo fails to find any balls on Chevy Chase. Now it all makes sense.

Tidings of no comfort, no joy.

I’ll tell you why I hate Chevy Chase. As much as Charlie Chaplin, Buster Keaton, Groucho Marx and Jerry Lewis worked on honing their comedic craft, the talent-less drogue Chevy Chase has done exactly the opposite.

Chase can be compared to his equally talent-less contemporary, singer Ozzy Osbourne; both Chevy and Ozzy ride the coat-tails of all those talented people around them into superstardom. Chevy had Belushi, Murray, Aykroyd, Radner; Ozzy had Iommi, Butler, Rhoads, Daisley…

Becoming widely recognized from his stint on SNL beginning in 1975, Chase somehow parlayed that recognition into film roles. Lacking any dramatic ability, he erroneously thought to pursue comedy. Maybe someone told him he was funny when they were beating the shit out of him in a bar. I hate to break it to you, Chevy, but they were being sarcastic: “Oh, you’re a funny asshole! Who’s laughing now?!”

Chevy Chase has now coasted  for decades on a false reputation of being a “comedian” when he is so patently, empirically devoid of humor of any stripe. His acting is atrocious, at the level of first-year students who “indicate” their way through performances (“I’m feeling crazy now, so I’ll widen my eyes and grimace” “I’m feeling sad now, so I’ll droop my shoulders and pout”); his timing is so appalling, it would be considered laughable – if there was the remotest possibility of laughing at anything Chevy Chase does; his posture, his facial expressions, his delivery, his insertion into the very scene itself is so coarsely amateurish, so devoid of the joke-craft and aptitude exhibited by actual comedians, it is an embarrassment to mention those exceptionally skilled comedy giants above in the same article. And I apologize to them, their families and their estates. 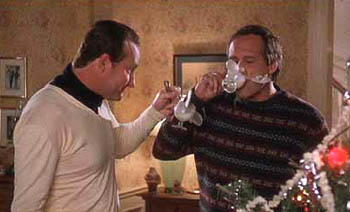 “Here’s to another film devoid of any redeeming qualities.”

Which brings us to NATIONAL LAMPOON’S CHRISTMAS VACATION.

Written by John Hughes in a meth amphetamine daze and directed ineptly by Jeremiah Chechik, the third VACATION film finds Clark Griswold (useless asshat Chevy Chase) and his wife Ellen (the glowing Beverly D’Angelo) spending Christmas at home, with their new kids (somehow, the Griswold teen kids keep transmogrifying into different people for every film – this time it’s Juliette Lewis in one of her first feature films and Johnny Galecki, long before THE BIG BANG THEORY); hosting both their sets of parents (John Randolph, Diane Ladd, E.G. Marshall and Doris Roberts), and redneck Cousin Eddie (Randy Quaid) and his wife and kids. William Hickey (Corrado Prizzi himself!) joins in as an old relative with a bad wig and a daft wife.

Clark Griswold’s neighbors (Julia Louis-Dreyfus and husband), say it best when they see Clark outside on a ladder: “I hope he falls and breaks his neck.” “Oh, I’m sure he’ll fall. But I don’t think we’re lucky enough for him to break his neck.”

And through Clark mounting Christmas lights, buying a tree, sledding downhill, being stuck in the attic, perving on a woman’s cleavage, shouting at or hugging his relatives, chasing a squirrel and carving the turkey, nothing funny happens.

Even Ozzy Osbourne is funnier.