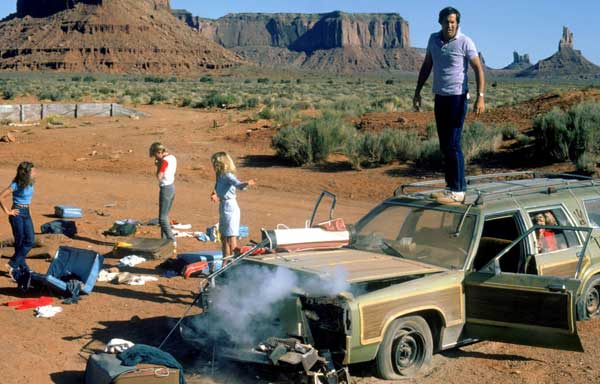 American Humor. And if that’s not an oxymoron, then surely the phrase Comedian Chevy Chase is. NATIONAL LAMPOON’S VACATION stars non-comedian Chase as Clark Griswold, a father determined to drive his family cross-country from Chicago to Los Angeles, to visit the famed Disneyland-type amusement park, Walley World. And all American Humor breaks loose, which means vain attempts at pushing the envelope on gross-out road-trip comedy, from inadvertently towing a dog to death to crashing the family car through a dead end sign. Hilarious.

Movies like VACATION make us realize that actual good American humor (like AIRPLANE, BLAZING SADDLES, BACK TO THE FUTURE, THE JERK, YOUNG FRANKENSTEIN) is the exception, not the rule.

NATIONAL LAMPOON’S VACATION is another of those overrated 80’s movies (like CADDYSHACK, or PRINCESS BRIDE) that somehow accrued a cult following, but upon viewing decades later, is so limp, you cringe in embarrassment for almost liking it back then because everyone said it was funny and you were at that age where you wanted so desperately to be loved.

Beverly D’Angelo (still luscious from her turn in EVERY WHICH WAY BUT LOOSE) is Clark’s long-suffering wife; Anthony Michael Hall is Clark’s son Rusty, starting his rule of 80’s geekdom (that would end with WEIRD SCIENCE in 1985), forgettable Dana Barron is his sister (who has done nothing of note since this movie), and Imogene Coca, far beyond her Use By date, is involved in another of the movie’s “edgy” gags, as Aunt Edna, who dies on the trip and is left for relatives to find, rigor mortising on their back porch. Randy Quaid is redneck Cousin Eddie, and Eugene Levy is a car salesman, long before both of them discovered comedy. And John Candy thinks that lisping will make people laugh at his doughy security guard cliché.

And Chevy Chase, oh smarmy, shifty-eyed, insufferable actor who somehow rose to prominence in the late 70s by falling down on SNL, “indicates” his way through every cringe-worthy gag like an auditioner trying too hard to ass-lick his way into the role of brown-noser.

Swimsuit model Christie Brinkley (just as she started dating Billy Joel) is the fantasy girl in the red sports car whom Clark finds himself suddenly alone with in a hotel pool, naked. At the time, we could never imagine how this hottie could ever be attracted to this weird-looking guy, but when Brinkley married Joel, it all fell into place…

National Lampoon was originally an edgy comedy magazine established in the States in  1970, helmed by CEO Matty Simmons. The connection to this movie lies with Simmons, whose job it was to expand the Lampoon brand, co-producing, and planting the name on a comedy which, I presume he felt, embodied the brand. Yet VACATION (directed by Harold Ramis, who just directed CADDYSHACK, and written by John Hughes – the man who would soon bring us THE BREAKFAST CLUB and Molly Ringwald’s Lips) contains none of the swagger or bravado of that incisive magazine.

I blame it all on casting. Whoever thought Chevy Chase was good enough to do anything in showbiz except maybe pad out B-roles as the guy who falls down in the middle background should have their head examined. Imagine how much more sturdy Clark Griswold might have been as Gene Wilder (in that WOMAN IN RED period) or Steve Martin (in his hilarious heyday, i.e. THE MAN WITH TWO BRAINS)?

In the end, the tiny shorts are the funniest thing about Chevy Chase in this movie. And he was trying to be serious.