For all its contrived clue-solving and annoying coincidences and tiresome car chases, and even Nicolas Cage‘s mourning face, NATIONAL TREASURE: BOOK OF SECRETS is a lot of fun. 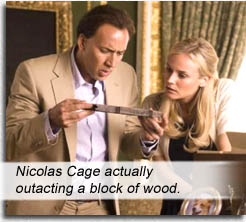 Maybe producer Jerry Bruckheimer had something to do with the fact we can hardly take a breath before the next relentless action sequence derived from chalky historical jargon disguised as clues to something only the inventor of Sudoku can understand.

Sequel to the less-fun NATIONAL TREASURE, this film finds Benjamin Franklin Gates (Cage) mourning-face-deep in another treasure hunt, this time for a Mayan City of Gold. Pointless outlining the roundabout manner in which the Mayan City becomes his goal, suffice to say the clues involve McGuffin piled on McGuffin piled on Abe Lincoln’s assassination with Ed Harris on top like a cherry.

Harris is villain Wilkinson, who also seeks the City for his own reasons. It is a thankless role, for he imbues the obvious “villain” with many layers. His motivations are not evil, though his actions are, and there is always doubt on how far he is willing to go for his “noble” cause. It is a subtlely shaded character that all villainous actors can learn from.

All the principal cast return, Jon Voight as Ben’s dad, Justin Bartha as Riley (given a little more to do this time round than just whine), Diane Kruger as Ben’s girl (whose stage direction was simply “whine louder than Justin Bartha”) and Helen Mirren (three times older than Diane Kruger and twice as sexy) as Voight’s estranged wife, for feisty comedic arguing. Even Harvey Keitel returns, to mill aimlessly on a professional basis.

Written by The Wibberlys (which sound like a couple of furry things from another planet) and once again directed by Jon Turteltaub, BOOK OF SECRETS takes our intrepid adventurers to Paris (where – so it says in the Foreign Director’s Handbook – the Eiffel Tower must be in every shot), to London’s Buckingham Palace, to the White House and into the Oval Office itself, to the revelation that “Mount Rushmore is a coverup…”

Nic Cage gets his Gom Jabbar moment when he puts his hand blindly into a rock orifice; the cast gets to tramp around blindly in labyrinthine passageways, but the coolest sequence by far is a Mayan death trap – a gigantic, tottering square slab that they must all balance, using each other’s weight as counterbalances.

The Book of Secrets is supposedly a Presidential tome – a captain’s log, if you will – of all the nation’s secrets tabulated by presidents for presidents, covering Area 51, the Kennedy assassination, the moon landing, etc. Movie plays it like a gag (with Bruce Greenwood as Pres) but we all know there really are secrets that only one president may pass onto the next, maybe not in an all-encompassing book, but surely in documentation which, if exposed, would lead to impeachment, jail, or being slapped to death with a cabbage.

When Candy Crowley of CNN asked newly-inaugurated President Obama in 2009 whether he had seen anything in his new job that had “given him pause,” he simply shot that gleaming smile at her and refused to comment. Why? Because he saw the real world analog of that Book of Secrets.

Yet the biggest mystery remains: What exactly is Harvey Keitel doing in this movie?