NATIONAL TREASURE is an old-fashioned treasure hunt, amped with modern technological idiocy, salted with a snide dig at the political laziness of the American people coupled with a sly j’accuse at their insuperably asinine government. 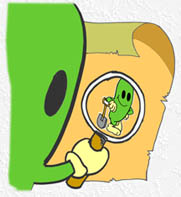 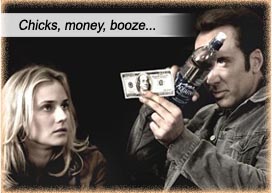 Treasure hunter Benjamin Franklin Gates (a characteristically mourning-faced Nicolas Cage, as the descendant of the descendant twice-removed of whatever) must steal the original Declaration of Independence before an unethical colleague (Sean Bean, whose Bad Guy coterie all wear black for convenience) steals it first. Both are after a hidden map on its back, leading to a treasure unimaginable, involving the Knights Templar, the Freemasons, and Harvey Keitel as some kind of “cleaner” (oh, like that’s believable!).

Insipid Diane Kruger and ineffectual Justin Bartha are along for the joyless ride, with Jon Voight trying not so hard to convince us he didn’t do this for the pay.

Director Jon Turteltaub, old hand at vapid cinema (PHENOMENON, 1996; WHILE YOU WERE SLEEPING, 1995), finds a moment of crystallization – when Gates quotes what he describes as the defining tenet of the Declaration: “But when a long train of abuses and usurpations, pursuing invariably the same object, evinces a design to reduce them under absolute despotism, it is their Right, it is their Duty, to throw off such government, and provide new guards for their future security.”

Considering this movie was released in 2004, when W was busy rearranging deck chairs on the Titanic, it seems obvious this message was addressed to the American populace, who somehow still couldn’t throw off that despot’s yoke.

But Gates fails to take into account the twisted methodology written into the American Constitution that makes it almost impossible to actually perform what was so idealistically envisioned by this country’s founders.

Firstly, ideological tenets cannot stand against a tyrannical government that refuses to acknowledge them; that is, how do you overthrow a government intent on staying in power by any means possible, legal or otherwise? Paraphrasing Lord Acton, John Roche warns: “It is not so much power that corrupts, as the prospect of losing power.” (Our Undemocratic Constitution, Sanford Levinson.)

“Indeed more than one representative and senator has accompanied retirement from Congress with comments about their own frustration at the difficulty of actually getting anything done with regard to the issues that motivated them to run for public office in the first place.” (ibid.)

It is simultaneously at this point in the film that it loses all integrity – for after Gates recites this King’s English (not one word lifted from anything other than the dictionary we all subscribe to, but admittedly phrased in a vernacular lost on this inbred iPod generation of gameslayers), Riley (Bartha) responds with “I have no idea what you just said.”

Gates even meditates after the recitation, “People don’t talk like that anymore.” Why? Because “people” are Riley. They need the OBVIOUS spelled out, which Gates proceeds to do – in lay-moron terms for the audience’s benefit – the audience being made up of more Rileys.

Immediately, this supposed dunderhead Riley, goes into a detailed description of the security measures that surround the Declaration, complete with the smash-cutting visuals that this short attention span audience seems to need in order to comprehend words with over two syllables. Riley knows all the angles – except the weakest link in the security chain – the Preservation Room – because we need The Hero, Gates, to do that transparent ‘splaining for the benefit of the audience once again.

The movie quickly degenerates to car chases, foot chases, unbelievably tenuous clues and arbitrary shooting. Factoring for inflation, all this trouble was probably for a treasure that was worth – oh, about $2.67.

During the heist, to rationalize his “honest theft” of the document, Cage toasts, “Here’s to the men who did what was considered wrong in order to do what they knew was right.”

It’s scary what George W. Bush and Dick Cheney might make of that statement.