Zac, Leonardo DiCaprio called. He wants to body-shave your torso.

A young married couple with a newborn are faced with a rowdy college fraternity moving in next door. And all rock hard abs break loose… well, not really, but once Zac Efron takes his shirt off, there’s really nothing left in the universe to look at.

The suburban comedy NEIGHBORS finds Mac (chub Seth Rogen), improbably married to Kelly (smokin’ Rose Byrne), parents of the cutest little baby (Elise and Zoey Vargas); in their 30s, they still feel cool enough to hang with the younger set. That theory is put to the test when college frat Delta Psi, headed by Teddy (Efron) and Pete (Dave Franco), move in next door and start causing party, noise, vandalism, and unassailable abs.

Mac and Kelly try to take it in stride, try to bond with Teddy’s crowd by bearing gifts of weed, try to walk the cool walk and talk the cool talk, but end up alienating Delta Psi because, well, old. Responsibilities, jobs, tiredness, no abs.

His blue eyes shimmering at their first meeting, Teddy very courteously asks Mac and Kelly to call him first if there’s too much noise and not to call the cops. Mac, not able to contact Teddy during the loud frat party – promptly calls the cops (Hannibal Buress). Teddy feels betrayed, and events escalate between the frustrated couple and Delta Psi, until it culminates in a gigantic party (as movies of this ilk so often do) that will decide the fate of Mac and Kelly’s marriage, Delta Psi’s future and Zac Efron’s glittering abs. 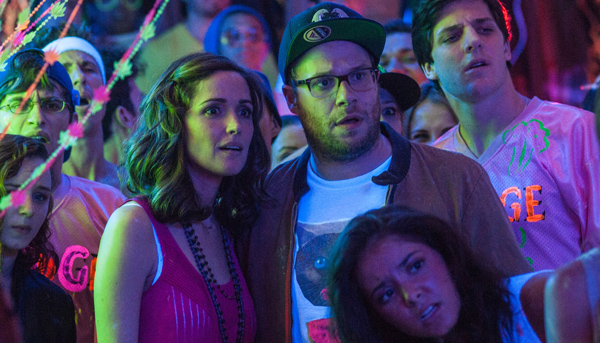 Someone tell Efron to put his shirt back on or we’ll never get this scene done!

In no way related to the dark Belushi-Aykroyd 1981 film of the same name, NEIGHBORS is not seeking to arc any damaged souls or raise any political issues, or even find true love amongst war-torn adversity. It just wants to blow up shit, get drunk and vomit on your lawn, sculpt some dildoes, have stoned party-sex, and show off Zac Efron’s abs. (I mean, really! He’s 27. How old was he when he started working out to get a body shaped like – as Seth Rogen observes – “a giant arrow pointing to your penis”?)

Ike Barinholtz in another great supporting role as Mac’s bud, who helps with the plots to bring down Delta Psi. His most hilarious one-liner (“Rape!”) just has to be heard in context to be appreciated. Carla Gallo is Ike’s wife, taken in by the hugeness of the Delta Psi penises. Rose Byrne is allowed to use her native Australian accent which allows us to touch ourselves downunda. Christopher Mintz-Plasse is a frat boy, and Craig Roberts is Assjuice. Halston Sage is Teddy’s dripping wet dream of a girlfriend, and Lisa Kudrow is the college principal. In flashbacks, it’s amusing to see two great comedy teams as Delta Psi pioneers – creating the concept for toga parties is The Lonely Island aka Andy Samberg, Jorma Taccome and Akiva Schaffer, and inventing beer pong are the WORKAHOLICS Adam Devine, Blake Anderson, Anders Holm and Kyle Newacheck.

Newbie writers Andrew Jay Cohen and Brendan O’Brien keep the oppositionist plot snappy and director Nicholas Stoller (GET HIM TO THE GREEK) keeps our attention by showing us abs.

Teddy and Pete make up and bro down.