The Future Is Then.

Back in the days when having a computer was like having a teleporter, young hacker Angela Bennett (Sandra Bullock, who has a computer at her home and everything!) is sent a disk (wow! A floppy disk! This is like, too futuristic for me to handle!) with an illegal program on it that could allow access to all your private information, your license and social security number, your bank accounts and credit cards, thereby allowing computer hackers to totally ruin your life.

In other words, like making a purchase on amazon. 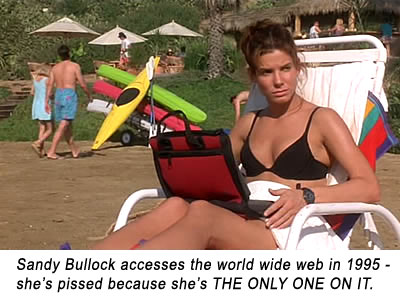 Now bad guys, led by milky Brit Jeremy Northam, are after Angela to get that disk. But are they really all that bad? All they want is to retrieve the disk and kill her. Not download malware and spyware and pop-ups, or freeze her computer until she pays a fee using a credit card that they gouge and sell to banks; not creak her mailbox with treeloads of junk mail any time she swipes a card to buy gas; not sell her information illegally to marketers and solicitation companies who make damnable Sunday morning phone calls; not deluge her with offers for erection pills and requests from Nigerian princes; not spam her email and send a virus to All in her address book that crashes their computers. I mean, it’s not like they’re amazon…

Only person she can turn to is ex-lover psychiatrist Dennis Miller. Remember when Dennis Miller was actually a cool cat? His manner came across as so natural and trustworthy that we never doubted for a second that he might’ve been a bad guy or had ulterior motives. That would come later when he got hired by Fox News.

Angela is a techno-hermit, ordering pizza on The Internet (revolutionary!), booking airline flights on The Internet (wow! You can do that?!), and planning dates that she never goes on… on The Internet. You had to say “The Internet” back then, otherwise people would think you were from The Future and call the men in white suits. Only total hipsters were allowed to call it The Net.

So now Angela (wearing those cutesy sweaters that come down to her knuckles) must escape these killers by running on real streets (not Pac Man alleys) in pearbottom jeans (that she probably bought on The Internet) and typing the shit out of some unsuspecting computers.

Is it ironic that she works on The Internet – where all information is stored – and her mother (Diane Baker) has Alzheimer’s? And is it coincidence how every single television broadcast is about her? And where’s her flying car? THE NET is a well-intentioned parable about all our information being easily retrievable and therefore dangerously vulnerable, but it’s dating faster than… uh, The Internet…

So exciting I almost opened a new gmail account.