So I’m totally writers-blocked one night while trying to finish my script, SHIFTER. And I’m channel-surfing cable, my mind a blank, settling in to a long night of unproductivity, wondering fearfully – like everyone who experiences the steel wall of Writer’s Block – how I’ll ever be able to string words together again, when suddenly – 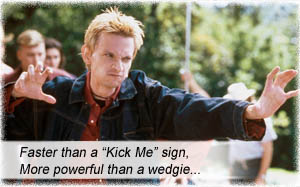 THE NEW GUY. And words come.

Ironically, there are not enough words in the virgin English tongue to describe the depths of stupidity THE NEW GUY plumbs. But it is not all bad. Well, the story, acting, directing, characters and production values are excrement – what saves the movie are its CAMEOS…

Just before I can slap someone in frustration for the movie’s putridness, and continue channel surfing – Gene Simmons.

Then Vanilla Ice as an overzealous bouncer. Funnier than his whole career combined.

Crue’s Tommy Lee as a partygoer with a chick on each arm – now there’s a stretch!

Other cameos passim, topped off by none other than The Hoff – doing his Knight Rider as only he can.

THE NEW GUY is about utter dorkfish, Gil Harris (D.J. Qualls), who gets himself expelled from school (after a humiliating erection incident), so he can re-invent himself at another school as tough guy, Dizzy Harrison. It’s meant to be a comedy. Too bad it isn’t funny.

I gotta get back to my script…