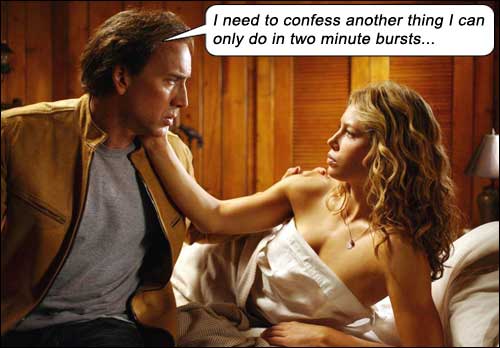 “Here’s the thing about the future,” Nic Cage tells us at the beginning of NEXT, “every time you look at it, it changes – because you looked at it. And that changes everything else.”

Cage is Cris Johnson, a Las Vegas mentalist who can see two minutes into his future. (Did anyone see another Las Vegas movie in Nic Cage’s future? What are the odds?! How many does that make? Did anyone foresee that his hairstyle would be a cross between Hanks’s Vitruvian Man in THE DA VINCI CODE and Gene Simmons Without Makeup?)

FBI Agent Ferris (Julianne Moore) is trying to forcefully enlist Cris in an FBI case involving international espionage and nukes. Annoying how she unequivocally believes in his foresight power, which he has parlayed into a Las Vegas magician act to stay undercover in plain sight.

NEXT is from a Phillip K. Dick novel, The Golden Man, so it is a compelling, intriguing premise, but an uninvolving movie. Trouble with any time-bending film is that you pull one little thread and the cardigan unravels. There are so many dangling threads in NEXT that we’re soon entangled like a playful kitty in a ball of yarn.

When Cris stops a potential thief in a casino, the police think he was the thief and chase him; he then “sees” his way through a complex cat-and-mouse evasion of the police through the casino labyrinth – yet he couldn’t “see” how to avoid the police mistaking him for the thief in the first place?

To meet his “destined love” Liz (Jessica Biel, who displays not one whit of chemistry with Cage), he foresees all the options on how to best approach her. Which means he can’t see into “the” future, but into “possible” futures. And while he’s thinking of all these two-minute-into-the-future-scenarios, ten minutes have gone by.

Every time we see an establishing aerial shot of Vegas, could we please please puh-leeze stop with the source music, A Little Less Conversation (A Little More Action)? Please. We get it. It’s Elvis’s town.

Julianne Moore plays Tough Guy almost as badly as when she was pursuing Hannibal Lecter. Something about her acting just makes my flesh crawl. Ever noticed how a woman in charge always – ALWAYS – has a man sidekick to bitchslap? Julianne’s slappable bitch here is Troy Kittles.

Don’t let me spoil it for you by revealing Patrick Duffy in the shower.

He can see the future, but he couldn’t see he was going to make an assface of himself by doing this movie.