Night of the Actor’s Studio Rejects.

Night of the Living Poff
(in glorious b/w) 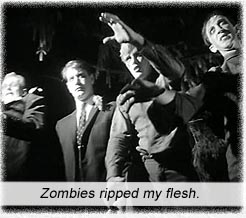 1968. While Kubrick unveiled 2001: A SPACE ODYSSEY, while Polanski birthed ROSEMARY’S BABY, while Franklin J. Schaffner unleashed PLANET OF THE APES, George A Romero, a director who couldn’t direct, got together with a bunch of actors who couldn’t act and lumbered out NIGHT OF THE LIVING DEAD. And the world became a stupider place.Romero was the Sex Pistols of movie-making. He didn’t really know any chords (self-admittedly a student, piggybacking off the techniques of his heroes), but he worked with the little talent he had to bludgeon his way into the industry.

The budget is non-existent, the story is basic – dead people come to life and attack living people – the music is genuinely chilling, the camera angles creatively discomfitting, the gore is graphic, the filmmaking sparse, the acting non-existent. The effect: priceless.

NIGHT OF THE LIVING DEAD is arguably the seed that started the moronic zombie movement in film. The zombie concept – the reanimated dead – was not new – on film, it dated back to at least FRANKENSTEIN (1931) and NOSFERATU (1922); in literature, popularized by the world’s most famous zombie, Jesus Christ.

Romero was the Eddie Van Halen of zombiedom – he didn’t invent fingertap, but everyone points to him when they think about it.

Called groundbreaking (rightfully) at the time of its release, LIVING DEAD suffers credibility so many years on simply due to one thing – the community theatre performances. A film is only as good as the actors who are trying to suspend our disbelief on the screen. If the actors are not in the moment, neither are we.

So don’t revile me for comparing this budgetless B-Lister with the A-List movies above. That is the main excuse for bad movies of this ilk – the cry goes up: “You have to take it in context! You have to compare it to films of its time!” Well, I just did and, budgetary considerations aside, in 1968 there was still such a thing as Actors. But NIGHT OF THE LIVING DEAD had none.

And don’t read too much into the politics of Duane Jones, an African-American, in the lead role. By Romero’s own admission, he was simply the best actor in the group (which says very little, believe me). He relates the anecdote of having the film “in the can” in the trunk of his car and hearing the news of Martin Luther King’s assassination. Suddenly, Duane Jones was a symbol of righteous blackness.

As Ben, Duane Jones leads a motley group of “indicating” actors boarded up in a farmhouse, to escape zombies on the prowl outside. An allusion to radiation is made as the cause of the zombie epidemic. (Radiation: the universal contaminant! Only one million 1950’s sci-fi films use it!) One by one, all Ben’s compatriots are killed or eaten by zombies.

Which happens to be George A. Romero’s filmmaking protocol.