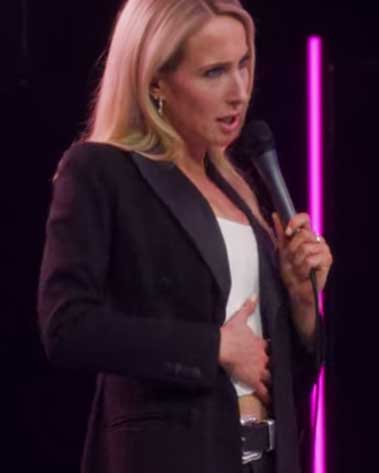 Nikki Glaser’s second standup Special, BANGIN’ (her first for Netflix), filmed at The Academy in Los Angeles, is 1 hour and 3 minutes of incessant chatter and zero content. I bet she writes in her dating profile descriptions that she’s “a good conversationalist” — because she is exactly the type that confuses talking with the art of conversation.

Nikki attacks each lewd subject with a sluttish brio that just screams woke female role model, “…Cos I like a dick in me. I’m sorry, I like getting stuffed.” And we can’t call you a slut because…? Oh, right, that would be sexist. Not like your act, which proves you are POWERFUL and INTELLIGENT and INDEPENDENT, when you “get blackout drunk, hone in on a guy and then Cosby myself into this situation where I would be penetrated that night.”

I’m sure women will find all this aggressive sexuality EMPOWERING. Trouble is, try and explain your empowerment to men who now think you want it anywhere anytime anyhow… In Nikki’s own words (from imdb Quotes): “A lot of time after shows guys say really disgusting and creepy, rapey things to me because they just have heard me talk so much and so openly about sex on-stage. They think it’s okay to continue the dialogue after the show. It’s always very jarring. I get where it comes from. I know they’re just stupid and that’s why they do it, and that it’s not malicious. They think they’re just joking around. But I feel like I’m a lady in the streets and a freak on the stage.”

Simply proving the archetype of the dirt-talking woman who is the first to cry #MeToo when someone propositions her in the carpark. Is that called hypocrisy or double standard? Feminists, I really need your help here.

If comedy is catharsis, if comedy is honesty, and if you are self-admittedly one of the new breed of comedians who open your veins onstage to bleed at the audience as your father-confessor, then you have to own up to your own words. You are not “fantasizing” when you deliver your vagina monologues, you are not relating other peoples’ anecdotes, you are saying, *I* am great at getting fucked. *I* was born with the ability to kick back and have a hole. *I* swallow cum. *I* need a dicking… (Oh, and by the way, it doesn’t take much to become “great at getting fucked”; in other words, you’re great at lying there and letting the man do all the work. Empowering!)

Look, I’m no prude; Nikki is a smokin’ hot babe with a svelte body built for bangin,’ and I love me some dirty, edgy female comedians (young Amy Schumer, Sarah Silverman, young Joan Rivers, Tiffany Haddish, Chelsea Handler, Janeane Garofalo), but every renowned filthy female comedian has substance behind her sexual observations; Nikki’s problem is not the filth, it’s the lack of thought that has gone into that filth. 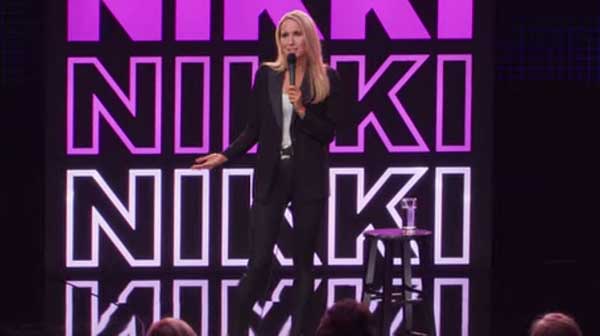 Where do you go after a show like BANGIN’? Straight to bangin’ of course!

I’m too far out of Nikki’s target audience (i.e. no vagina) to find her shallow jokes funny and, unfortunately for her, I’ve been exposed to GOOD comedy, from the likes of Pryor, Carlin, Hicks, Chappelle, Silverman and Garofalo. I’m not even offended at the jokes; they’re just buck-nasty for shock value to her pedestrian Millennial audiences who are just discovering their labial folds look like overstuffed burgers… And we note how the energy level and interest level drops in the few moments Nikki treads outside the realm of lascivious, as she lacks the ability to craft her non-sexual material as compellingly as her filth. So she’s dug herself into her own hole. (See how I crafted that double-meaning, Nikki? But I guess your Cro-Magnon audience doesn’t appreciate anything more intellectual than, “I love getting fucked.” It works for you because they’re also so lowbrowed they laugh at that line as if it’s a crafted joke. You win, Nikki. I could never hope to confront an audience so jejune.)

It’s ironic that there is so much vitriol directed toward Amy Schumer these days for joke-stealing, and now Nikki is outright stealing Amy’s whole act.