NINE MONTHS is about an expectant couple. To borrow a tagline from a Jeff Goldblum movie: Be afraid. Be very afraid. If the inanity doesn’t kill you, the stupidity will. 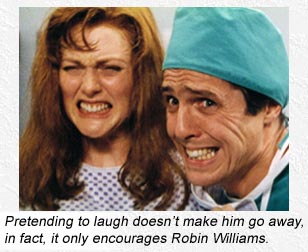 NINE MONTHS opens with Samuel and Rebecca (Hugh Grant and Julianne Moore) on a beach, assessing their couplehood, Samuel deciding he is happy, Rebecca intimating she is dissatisfied. (So what’s new? She’s a woman in a relationship – synonymous with “dissatisfied.”) She speaks of her biological clock and other subjects men Do Not Hear – and we brace ourselves for a dull romantic comedy.

Suddenly – Tom Arnold! With three spoiled brat kids and Joan Cusack screeching not far behind as his harridan wife. And we realize we’re in for a dull, STUPID romantic comedy.

Women are always complaining that men cannot know the pain of childbirth. By watching NINE MONTHS, each of us insensitive men can at last feel such pain.

Based on a film written and directed by Patrick Braoudé, NEUF MOIS, Chris Columbus writes and directs NINE MONTHS like a brainless farce rooted in wrong: the wrong way to raise kids, the wrong way to behave during pregnancy, the wrong way to assess morality and the wrong way to medically process a birth (Robin Williams makes an embarrassing cameo as a Russian obstetrician who seems to have his accent confused with his asshole).

Marty’s (Arnold’s) kids are such horrible snots that this movie shoots itself in the womb as it is trying to send the message that kids are precious.

Jeff Goldblum is Sean, Samuel’s best friend and sworn bachelor. And the high point of the movie – he’s the B-character, but his presence is magnetic; it’s like a professional has been called in to work amateurs. When he calls Marty’s kids “monsters” – even though they are portrayed that way – he is regarded as perverse as a guy who turns into a human fly. When Sean describes how he dumped his girlfriend when she wanted to get pregnant, he is again painted as hilariously crazy, even though he is the most balanced character in the movie: “She chewed up my manhood, swallowed my youth… She wanted my seed, so I closed the iron door, denied her my essence!” And he left out the part about his baby being a maggot.

When Rebecca falls pregnant, she tells Samuel she gets a kick out of “something living inside her.” (Was she talking about Samuel’s English pinewood during intercourse? Maybe she should talk to Geena Davis during that dream sequence birth.) For the record, girly, nothing is “living inside you” – your baby is a part of your metabolism. It IS you until it is birthed. If you want to talk about things living inside you with a sovereign metabolism, think about the billions of bacteria in your mouth or the bacteria that helps digest food in your villi. Got tapeworm? Why not a gerbil?

Message comes through loud and stupid: Pregnant mothers are the best people in the world. The expectant father is Always Wrong. And getting to the hospital during labor is always going to be riddled with idiocy. And the sworn Monster Bachelor can’t possibly be happy with a 25-year-old blond on his arm with “breasts like spongecake, calves like calzones and crazy about sex,” because bachelors are men and Men Are Pigs.

And though it is happening naturally in billions of organisms around the Earth, though the process of birth is no more outside the natural order of life than breathing, though there is nothing about pregnancy that defies logic or biology, whenever a women plops out an infant human being, it is somehow always – a Miracle.

And then there’s the other subliminal message that because the mother is pregnant, she HAS to get married to her live-in boyfriend before the birth, because heaven forfend if they’re not married when the baby is born – it might be the anti-christ or a maggot or something…

Give her nine more months cleaning up vomit and cack – she’ll miraculously be dissatisfied all over again.