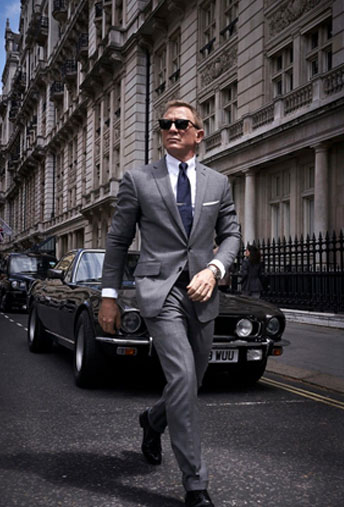 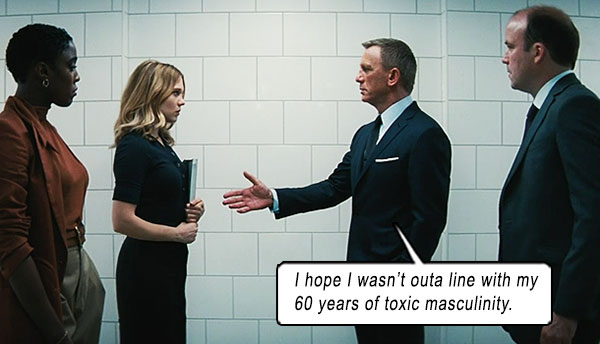 Daniel Craig’s last ever Bond. Is it too gauche to say he goes out… with a BANG?

NO TIME TO DIE is a handsome robust conclusion to the Daniel Craig Bond adventure, something the Bond franchise has never done for its other leading spies. After wrapping SPECTRE (2015), with Daniel’s admission that he would rather eat glass than make another Bond, it seems fortunate that producers at EON Productions (Michael G. Wilson and Barbara Broccoli) could coax one last entry out of him, to close the final chapter respectfully. Although it seems Daniel was just in a mood during that particular interview, as his respect for the icon he stewarded for the last 15 years is apparent in this story that almost mirrors his real life reticence.

Bond (Craig) is enlisted by the CIA’s Felix Leiter (Jeffrey Wright) to kidnap a biologist named Obruchev from Spectre, whose DNA-based weapon can wipe out whole swathes of humanity. Bond’s own spy agency MI6, works against him to kidnap Obruchev for themselves, employing a newly-minted 007 – a black woman, no less (Lashan Lynch, knocking down two woke birds with one stone). And playing against them all, a mumbling stranger (Rami Malek) with the phonetically saucy name of Lyutsifer Safin.

This last point has the internet abuzz that EON Productions is setting up Lynch as a “female Bond” – but stop that fretting, misogynistic mother’s-basement incels. Yes, casting Lynch stinks of the new reverse-sexism of “girling up” traditionally male movie roles (GHOSTBUSTERS, THOR, OCEAN’S ELEVEN), but it becomes apparent that Lynch is not here for the long haul; she is merely a device to illustrate “Bond losing everything” – even his spy identity – so that his hero’s journey will be all the more epic.

Yet it still stinks of pushing the envelope when it is hinted that Q is gay. If you writers (director Cary Joji Fukunaga, with co-writers Neal Purvis and Robert Wade) want to create a new gay character – go nuts! – but why fuck with 60-year-old canon for the sake of appeasing tweeting Karens? Why not shoot the whole shebang and make the next Bond a non-binary quadriplegic bi-racial muslim midget? Oh, I see one of the writers is Phoebe Waller-Bridge – no doubt the one responsible for all the woman-whining in the script (my summation based solely on her portrayal of that feminist droid on SOLO. So sue me).

The cold open is 23 minutes long (that’s the length of a First Act!), finding Bond on the ancient cobbled streets of Italy (exactly where Michael Corleone went to hide out). Bond languidly promises Madeleine, “We have all the time in the world”– Uh-oh, the last time Bond heard that Louie Armstrong song (ON HER MAJESTY’S SECRET SERVICE, 1969), his wife was brutally murdered. This time, it’s the other way ‘round…

While both try to move on from their pasts, they find that people from their pasts don’t share the same zen. (Again like Michael: “Just when I thought I was out – they pull me back IN!”) Assassins force Bond onto a bike (the stunt up the staircase and over the courtyard wall is Steve McQueen in GREAT ESCAPE – times 10!), and then into his tricked-out Aston Martin – with the guns and smoke and spiky little mines – but the upshot of all the machine-gunning and musclecar-drifting is that Bond now doubts whether Madeleine betrayed him or not. And the scene of him putting her on a train saying, “You’ll never see me again!” is heart-wrenching!

We fade into opening titles, with Billie Eilish whispering the song No Time To Die (with no silhouetted naked women — damn you, Phoebe Waller-Bridge!).

The Obruchev plot kicks in. It always amazes me that in any movie where the smart scientist is being pursued, his formula/invention/weapon only resides in HIS brain. Guys, ever heard of flash-drives, trusted colleagues, or even the damn Cloud? Like my I.T. guy keeps telling me: MAKE A COPY OF YOUR WORK. Smart like squirrels.

As with all Bond adventures, it’s big and bold and European, first teaming Bond with a stunning slit-skirted MI6 agent, Paloma (Ana de Armas – last seen with Craig in KNIVES OUT 2019). In Craig’s first (CASINO ROYALE, 2006), when asked by the bartender, “Shaken or stirred?” his retort, “Do I look like I give a damn?!” was to buck convention – but now, in this final entry, to keep the legacy rose-colored, his drink order for Paloma and himself: “Two vodka-martinis – shaken, not stirred.” 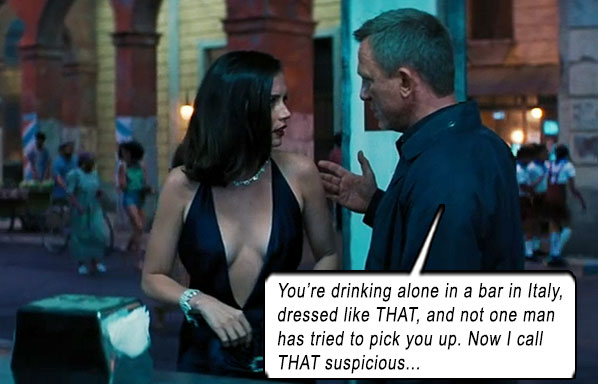 Besides making thirteen-year-old boys wonder how Paloma’s jumblies don’t fall out of that lowcut-no-back-thigh-slit dress, her short cameo as an action heroine shows us how woman empowerment should be done – her every move sensual, from dragging Bond into a closet to suit him up, to inserting his ear bud; from giggling about being a naif on the job to kicking ass and wielding an automatic machine gun. There’s nothing more attractive than a powerful woman who keeps her mouth shut about being a powerful woman.

It’s great to see Ben Whishaw as Q again (if only Desmond Llewelyn had this much meaty screentime! Although getting the old-school curmudgeon to acquiesce to man-love would’ve been a harder proposition), and find ourselves wondering which of Craig’s crew will remain across screen Bonds. And it is very sad to see Jeffrey Wright take his final bow as Felix (the longest-recurring Felix – 5 movies – with David Hedison far behind with only 2 appearances).

Bond reconciles with Madeleine, and discovers her strange connection with Blofeld…

I’m really disappointed in Christoph Waltz’s portrayal of Blofeld across the Craig Bond series. If ever any filmmaker was going to recapture Waltz’s stone-cold menace from INGLOURIOUS BASTERDS, then surely casting him as one of film history’s greatest villains should have done the trick. Alas, what little menace he mustered in 2015’s SPECTRE (his first appearance as Bond’s nemesis, Blofeld) has been leached from this entry, as he mustache-twirls for five minutes while in cuffs, and is then dispatched quite offhandedly.

Blofeld’s oomph-Bond-Gimmick was his scar over his eye, Donald Pleasance sporting it for maximum mad scientist effect in YOU ONLY LIVE TWICE (1967). Here, they’ve Hollywood-ized the scar, making it an inauthentic non-eye, clearly the result of greenscreen prosthetics, and losing all menace entirely. Barbara Broccoli – you had Christoph Waltz! And you blew it!

Though the story is more cohesive than any entries from Sean or Roger, the plot is diluted when the movie mishandles its actual major villain – Malek’s Lyutsifer Safin – who is the engine behind the Obruchev plot, but doesn’t appear until well into the second act, expositing his retcon connections with Madeleine, with his face on Quarter Deformity. (No cute star goes Full Deformity. Though his burned face is meant to inspire the same body-horror as Blofeld’s scar, they’re not gonna risk that bankable cutie-pie mug with any real ickiness.)

Like every great morally ambiguous villain, Safin wants to save humanity by ending it (my kinda guy!), “We tell each other lies about the fight for free will, but… we want to be told how to live – and then die when we are not looking. People want oblivion. And a few of us are born to build it for them.” He tells Bond that they are not so different: “We both eradicate people to make the world a better place.” Ah yes, again with the Demon est Deus inversus – the Devil is God upside down – the hero and villain are two sides of the same damaged coin… Hence, his name – Safin believes he is opening the world’s eyes to evolve (Lucifer = “light-bringer”). 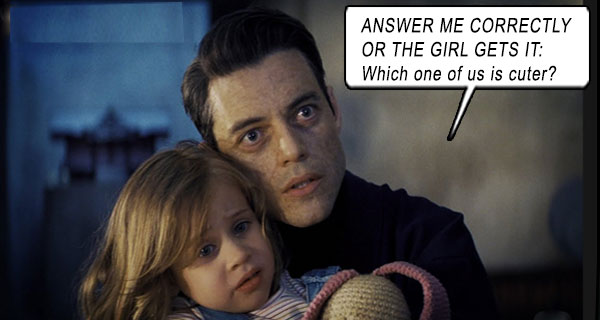 A poetic ending, a live-by-the-sword parable. Though we never want our hero to die, I must admit, if Bond had to go, this is a most satisfying way – while saving the world, while sacrificing himself for the greater good, while wishing his loved ones “all the time in the world”…

We discover – as Bond does – a daughter of Madeleine’s. Mathilde. Striking blue hawk eyes. Is she or isn’t she… a Bond Girl? Whomever she is – SUCH A CUTIE! You thought Lexi Rabe was cute with her “Love you 3000” to Iron Man; you thought Abby Ryder Forston was cute playing with Ant Man, well Lisa-Dorah Sonnet is Cuteness x 007!

At one point, Mathilde realizes she’s lost her bunny doll, her “Dou Dou” – and in running to escape the facility before it blows, Bond finds it and tucks it into his belt. We are conditioned to those saccharine endings, where Dou Dou might pop up from behind a table, to Mathilde’s delight, with Bond following it, to Madeleine’s delight… but Dou Dou stays tucked in Bond’s belt as he stolidly watches the nukes explode in a row towards him.

And Louie Armstrong sings us out. Except for Monty Norman’s James Bond Theme, this is the only song ever used in more than one James Bond film – We Have All The Time In The World. Suddenly taking on much more heartbreak, to what would seem the final Bond. (James Bond has never died in a film before.) But there is a bittersweet sigh of relief when we are assured this is only Daniel Craig’s final chapter, as the final titles sling that old refrain, white type on black background: