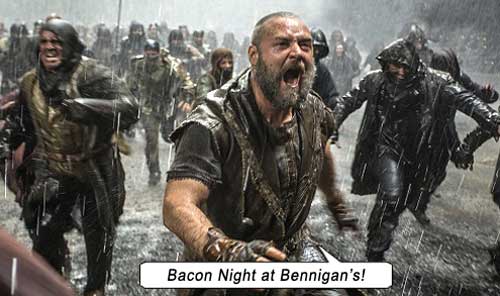 Obsession! It’s not just a perfume. It’s all over the King James Bible. And for the first time, captured in a major motion picture that doesn’t paint a biblical figure like a cardboard cutout whimsically pimping himself out to God’s unholy will.

On the strength of a “vision,” a guy builds a boat 300 cubits long (whatever that is), gathers every animal on Earth and tends them for years while his own species and all creation is annihilated around him – on any psychoanalyst’s couch, that’s obsession! And writer-director Darren Aronofsky is well-versed in obsession (REQUIEM FOR A DREAM, THE WRESTLER, BLACK SWAN), imbuing this compelling new hook into the wave-rider known to us since schooldays as a doddering 900-year-old fossil. But Noah here is not the meek, white-bearded saint with the walking stick and halo – he’s the gladiator who became a slave…

NOAH is a tsunami of fresh ideas, a font of profound and creative filmmaking, from a story older than christianity (stop that whining, you mongrel religion of stolen rituals!).

Now we could be sidetracked here and argue aimlessly around biblical lore and theology – but why bother? Aronofsky has used merely the barest nub of King James plot to drive his story – after that initial spark about the flood and a savior named Noah, everything else is grand invention. (Just like the bible!) Flood myths abound in every religion and culture, so for Republicans and christians and islamists et al to ban, badmouth or boycott this film as if THEY exclusively own the right to be outraged over 10,000-year-old myths is more irrelevant than the impotent petulance of their imagined gods. It’s a fantastic piece of filmmaking. Sit back and enjoy it, dickheads! 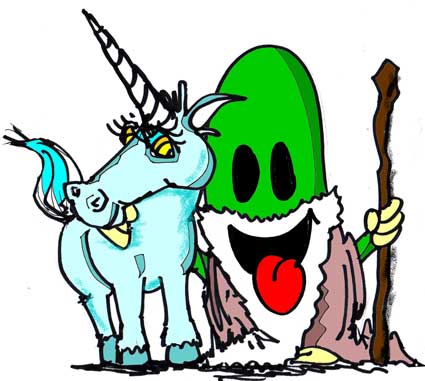 Russell Crowe is Noah Maximus Decimus Meridius, commander of the Felix legions of the North, and soil swisher (I can’t figure what he does for a living except swish his drum-gloves through black soil with his family). Jennifer Connelly (such perfect beauty, such passionate talent) is his faithful wife Naameh (also Crowe’s wife in A BEAUTIFUL MIND). They begat three sons, Shem, Ham and Japheth, and adopt a wounded girl Ila, who would grow up to be the powerful wizard Hermione.

Back when the Earth was only 1000 years old, God spaketh to Russell Crowe and bad him build an ark to save the animals because mankind was facing the chopper at His Almighty Petulant Hand for becoming “evil,” which, from what I can tell, means eating meat and wanting to have The Sex. Noah visits his hermit dad Methuselah (Anthony Hopkins) to seek advice, who immediately puts a Spock nerve-pinch on Noah’s son for not bringing him berries, and rufies Noah.

While half-baked, Noah sees the world covered in water, and figures that “fire means death” but “water means cleansing” (which is ironic, considering he hasn’t taken a bath his whole adult life). Methuselah gives Noah a magic seed from Jack and the Beanstalk, and when Noah plants it, a 1000-acre forest springs up instantaneously. Just like it says in the bible. Apparently, the Creator (he’s not called “God” because that would affect the box office) supplied the lumber for the ark by magic. Just like it says in the bible. Which begs the question: If he could make trees by magic, why not make an ARK by magic? Fallen angels called Watchers help Noah build. They’re giant beings made of rock that speak like Treebeard. Just like it says in the bible.

Genesis 2:10: “And a river went out of Eden to water the garden…” We see streams of water issue from ground zero, snaking for hundreds of miles, and – as God foretold – every CGI animal at Industrial Light and Magic that dranketh of the water followed its source back to the ark. (The time-compression and jump-cut methodology are awe-inspiring during this sequence, and Aronofsky and cinematographer Matthew Libatique will put that technique to even greater use when Noah relates the tale of Genesis.)

NOAH stays so true to biblical writ that when the British supervillain appeared, it was like I was back in bible class being caned sensually by Father Smithins again. Ray Winstone is Tubal-cain, a descendant of Cain, the guy who killed his brother’s lemur… what? oh, his brother’s keeper… (I thought he said “Blessed are the cheesemakers…”) Cain calls himself king and wants the ark; he commands mindless hordes who are meat eaters, unlike Noah’s holy vegetarians. British, meat – they must be evil! And all meat eaters are rapists and atheists, right? That’s all that goes on at Cain’s camp: meat-eating and raping and not worshipping god. (Where do I sign up?) 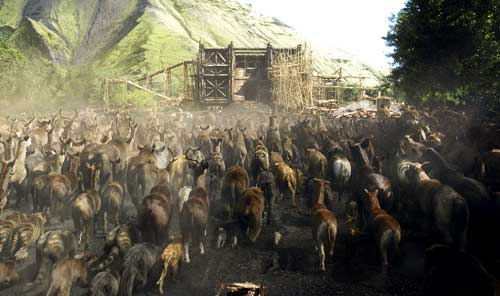 Criteria to enter ark: you must be a large mammal,
and you must live on THIS side of the ark.

In the trailers, we see Tubal-cain challenge Noah, “I have my armies and you stand there alone and defy me?!” Noah answers, “I’m not alone,” and the scene cuts. He’s probably talking metaphorically about his invisible god “standing beside him in spirit” blah blah – but no! We now see past the cut – to the rock angels suddenly rising up from the earth around Noah, to the dismay of Cain. And us! (They left that scene out of trailers not because it was a cool reveal, but because marketing didn’t want to risk christians being put off by rock angels!)

Meanwhile the human interest stories pile up, that will smash headlong into Noah’s obsession later. Shem (Douglas Booth) is trying to make Emma Watson pregnant– are you crazy, boy?! Ruin the world’s sexiest spinner with stretchmarks? Luckily, she is barren. And teen Ham (Logan Lerman, 3:10 TO YUMA 2007, a young Christian Slater) realizes that when humanity is wiped out, there’ll be no leftover girl-meat for him. Noah tries to avert this dead-end situation by going undercover in search of brides in Cain’s evil camp. Finding none, he comes to an epiphany – that the Creator wants mankind wiped out! That Noah himself is the instrument to save all the animals and then perish with his family.

THIS – was something new! In the 6,000-year history of this planet, I have not seen such audacious rewriting of mythology since MAN OF STEEL (where “sent to Earth for a reason” was transmogrified into “terraforming and racial cleansing”). Aronofsky (and co-writer Ari Handel) have boldly rewritten Genesis 7:7 (“And Noah went in, and his sons, and his wife, and his sons’ wives with him, into the ark…”) and made Noah’s elder son’s wife barren, and left Noah’s two younger sons wifeless virgins. (Next they’re going to spin some other such leftist hogwash, like the Earth is four billion years old, or the universe is expanding!)

Neemah wails, “I just want my sons to have love!” Uh, you mean sex. Because when it comes down to the wire, as in this story, all pretense is thrown out with the unicorns. Shem and Ham urgently realize the reality that ‘love’ isn’t going to propagate the human species. If there’s one thing christianity has taught me, it’s that Sex Comes First. So sayeth Father Smithins every time he touched my botty in the name of Christ.

But shit’s about to get real…

“we have been entrusted with a task much greater than our own desires.”

Noah’s first act when the ark is seabound is to stoneheartedly refuse to save hundreds of humans clinging to a nearby crag screaming in agony. He stoically maintains his stance of only saving those who will be doomed to die out – his family.

In response to their protests of him being a meanie, he relates Genesis – and it is astounding how this sequence – which should have made my head explode – won me over!

The film-making to this point has been exemplary; visual storytelling, motivations, foreshadowing, seamless CGI, breathtaking scenery, the ark itself magnificent, and the deluge as depressing as a rain-soaked Monday morning. Now, as Noah recounts the “first five days” of the universe, computer graphics accompany his narration that tell a less simplistic story, as if we have skipped across to the new COSMOS: A SPACETIME ODYSSEY: we see the Big Bang (very correctly depicted as an “expansion” not an explosion), the early coagulating of matter in spacetime; we see the nascent Moon smashing into the Earth, fragmenting and accreting!; we even see the splitting of cells!; visuals tread very lightly on dinosaurs, evolution, ape-like creatures…to the Fall of Man (cough-woman’s fault!). With the scientifically accurate visuals, we can see the filmmakers have sincerely tried to reconcile ridiculous fancy with facts – and it works (unless you’re a religious freak or a Republican).

Then Noah drops the bomb: “Now it begins again – air, water, plant, fish, animal. Paradise returns – but this time there will be no men to destroy it. The Creator has judged us: mankind must end!” Noah relates the order in which each of them will bury the other as they die off, “You Japheth, will be the last man, and in time, you too will return to dust…”

It rocked me backwards in my little cucumber seat. And when Hermione gets pregnant, Noah’s arc of descent (heh!) has reached its nadir, his fatalism and obsession at the point where he doesn’t want the human race to continue even if it could!…

The biblical Noah tale is just another in a long line of flood myths, each myth embellishing its culture’s values, primal fears and redemption fantasies into the narrative, so massive kudos to this new Whitey version that makes it dramatically compelling to modern audiences who would have stayed away in droves had it been about a pious whitebeard tending sheep and giraffes while wearing a halo. (There is a reason why Noah is Gladiator Maximus – so that when he engages in hand-to-hand combat against vagrants trying to board the ark, we buy it 100%. Noah is Action Man for THIS generation. This ain’t your grandpappy’s Noah.)

After a fake CGI dove, during a fake CGI rainbow, Noah entreats Hermione’s two wizard girl babies, “Be fruitful and multiply – replenish the Earth.” Y’know, with only the seven of you on the planet, I can’t think of any realistic way to do that without being INCESTUOUS SLUTS. But they must have been successful, because here we are, 5,000 years later, having survived the deluge, the dinosaurs, the dark ages, and ancient aliens (in that order). Let me consult my Hogwarts Book of Spells on how it was done…

The Fix Is In.
It’s a well-known satirical fact how Hollywood filmmakers fix insoluble situations with half-baked or shark-jumping one-liners – best illustrated in THANK YOU FOR SMOKING when Hollywood exec Rob Lowe, off the top of his head, rationalizes how people could smoke in space, “It’s an easy fix. One line of dialogue. ‘Thank God we invented the… you know, whatever device.'”

In NOAH, to circumvent the reality of having six people tending one million animals, Neemah creates a vapor to put every single animal into suspended animation. That’s that. After the grand entrances of the birds, reptiles and then big mammals (the three major classes we can actually see and therefore think of as more important than the rest of the animals on Earth), not one peep from the animal kingdom for the rest of the movie.

The biblical version of chemtrails!

Which Flood Exactly Offends You?
Hilarious how American conservatives pick apart this movie – every tiny plot point and detail that differs from the King James Bible – railing against a fantasy lifted from a fantasy! Aren’t these the same people who selectively forget the biblical rules regarding  their wives, oxen and slaves (all interchangeable)? But with so many flood myths, exactly which parts of which flood myths are offending them?
DUNMORE RANT: