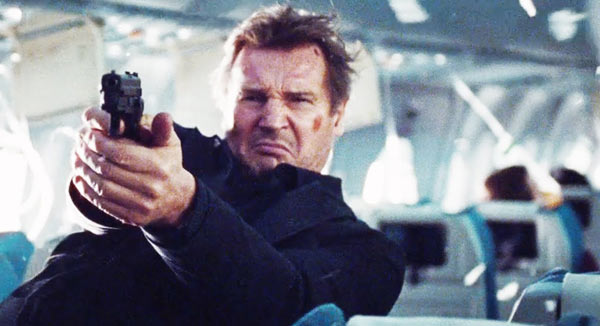 The plane in Spain falls mainly on the Liam.

A particular set of thrills.

An air marshal must stop a mysterious texting terrorist carrying out his threats to kill one person every 20 minutes. And sending poo emojis.

The airplane thriller NON-STOP is, in fact, non-stop thrills, with Liam Neeson plying his intensity as air marshal Bill Marks (basically a reprise of his role as Bryan Mills, special forces juggernaut in the TAKEN series… Hmm, Bill Marks? Bryan Mills? Coincidence that the names sound so familiar? I don’t think so!). Jaume Collet-Serra directs, with the efficiency that creates a lean backstory for the ex-alcoholic Marks in a few frames. Like a poo emoji.

Onboard this transatlantic, non-stop flight from New York to London, Marks receives a text on his secure line that someone is going to die in 20 minutes, unless 150 million dollars is transferred to a certain account number. The texter claims he is onboard the plane, proving it by making real time comments about Marks’ futile search for him.

On a plane full of passengers, everyone is a suspect. Is it the sultry stewardess (Michelle Dockery, with one of those faces where you can see her little-girl-face beneath the cute spinner adult she has grown into), the friendly redhead Jen in the seat beside him (Julianne Moore, looking more lubricious the older she gets. Is it ME, or HER?), the New York cop (Corey Stoll – hooray!), the muslim doctor (Omar Metwally, with a great sad, somber face), the geeky Bowen (Scoot McNairy), the attorney Wheeler (Frank Deal), or any one of the scores of passengers with Red Herring stamped on their butts?

Marks breaks protocol by contacting his secondary air marshal Hammond (Anson Mount, who wishes he was Eric Roberts), but neither Hammond, nor Marks’ boss on the phone, nor the pilot (Linus Roche) believe the terrorist can pull off his threat in this closed environment. Until someone dies. Exactly 20 minutes from the time Marks set his watch to the threat.

And it was Marks who did the killing!

NON-STOP is like one of those time travel movies where you try to stop an event from happening and it happens anyway – despite your intervention – through another set of insane serendipitous circumstances.

The tension keeps ratcheting, even with texts being the mode of communication. (It is interesting how moviemakers have integrated text into modern storytelling; that gutless device that allows people to say things they can’t say to your face, which, ironically, gets people into the same amount of trouble for its narrow spectrum of communication.) Another person dies. It is discovered the terrorist’s account number is in Marks’ name! His boss on the phone begins to doubt his sanity, his female confidants (Jen and Cutie) start to take offense at his accusations, the air force sends out two fighter jets to escort the 747 to the nearest landing; the pilot is instructed to take Marks’ gun and badge away – until he too dies mysteriously, leaving the co-pilot (Jason Butler Harner) to navigate between the two fighter jets, sweating through his epaulets.

Marks begins to wonder: Is he in a blackout state? Is he, in fact, responsible for these deaths and an impending terrorist act? In essence, he himself becomes a suspect! Will his “particular set of skills” get him out of this one?

Production values are excellent; the storytelling is creative, with twists and turns snaking through the narrative, with fast-paced action and Liam just eating up the tragic action hero role he has become accustomed to in modern American cinema. In the final telling, NON-STOP bows to a few too many filmic conventions that seem pulled from the asses of studio executives (“yeh, make him an alcoholic with a dead daughter”; “yeh he hooks up with the chick in the end” etc.), to keep it airtight, but is well worth the excitement during the Neeson-tastic journey.