Such is the underhanded misnomered word game the extremist villagers who call themselves the American Republican Party have played since the landmark decision Roe v. Wade made abortion legal in the United States in 1973. And everyone else has played right into their hands! You see, when you call yourself Pro-Life you imply any contrary stance is Pro-DEATH.

Are you Pro-Death? Is ANYONE Pro-Death? Even murderers and suiciders and people who have abortions are not Pro-Death. There’s no such thing. Living cells (of which we are made up of nothing but – correct sentiment even if incorrect grammar) autonomously abhor the condition of anti-life. Living cells only seek to propagate themselves, to continue their genetic code and blah blah science, etc. but this is not the forum for me to explain gene replication (for that, meet me for a beer and Scotch egg at The Robin Hood). Even though I’ve lost my Republican readers with the satanic word ‘science’ I shall push forward…

We are ALL Pro-Life. Pro-Life is the condition of the human species, and every single species that has ever existed on Earth. For the very fact we are alive, we can’t BE any more Pro.

The correct term for a party that wants to deny choice is, of course, ANTI-CHOICE.

To be absolutely clear: The gaslighters who call themselves “Pro-life” are actually ANTI-CHOICE.

For various reasons, they can’t bear to afford other people the respect or dignity of choice. They want the government to intrude upon people’s decisions to birth or abort, while in the same breath calling for smaller government. They want the government to intrude on decisions of birth or abort even though it has been secured by law in the United States that it is each person’s right to make that decision themselves.

I’m not here to argue the morality of Pro-Choice or the venality of Anti-Choice – I’m just sick to death of duplicitous scum calling themselves Pro-Life when they are actually Anti-Choice; “pro-life” implying everyone else is a crazy-eyed killer of children.

For brevity and educational purposes – consult the chart below. 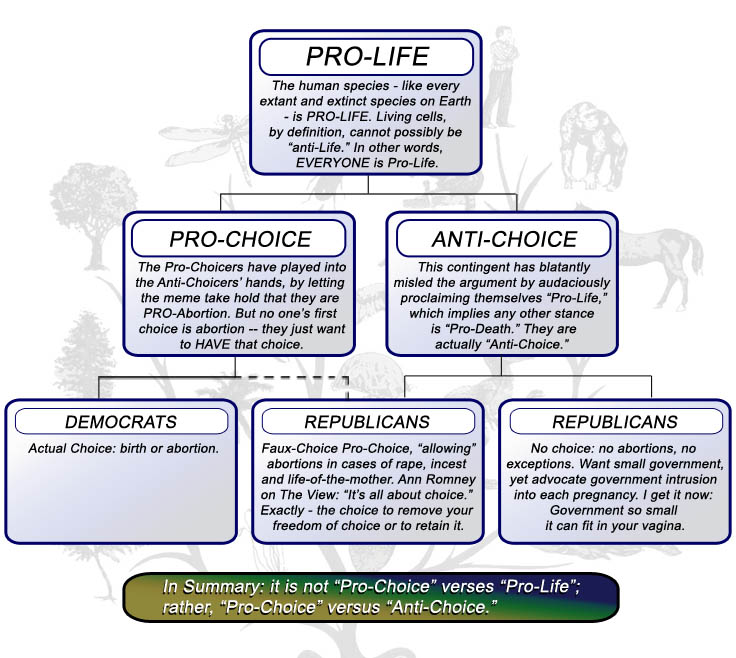 Anti-Choice advocates have muddied the waters of the Abortion debate – by calling themselves Pro-Life. And everyone else has been sucked into playing the word game by their rules.
— by Jon Dunmore © 22 Nov 2012.

Back to: RANT INDEX
Word Count: 560      Rant: 2
Roe v. Wade
Read about what caused all the fuss.
Whether you consider yourself moral, Democratic, Republican or pregnant, there’s no denying the grammar behind “choice” and its opposite.