Directed by the great Bill Duke (the big black guy from PREDATOR), NOT EASILY BROKEN is tailored for the black christian market like a black suit and tie is tailored for a Reservoir Dog. 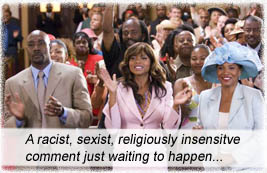 Dave Johnson (Morris Chestnut) is married to a screeching harridan (Taraji P. Henson), who seems to possess no redeeming qualities except two mungus ta-tas – but that ain’t no reason to be married to the bitch. Apparently, the knotted rope the priest entwined around their bodies when he declared them married signified God had something to do with the state contract, so – like all good christians – Dave and Screechy fear what might happen were they to break that bond.

Subplots abound, as Screechy winds up in hospital after a great, realistic car accident that actually shuts her mouth mid-screech; the MILF’s son dies in a swimming pool accident (pretty gruesome stuff for a minor character, only for the sake of leaving her vulnerable to Dave); Kevin Hart provides a few laughs as Dave’s Crazy Black Dude friend and Eddie Cibrian is the Token White Dude friend.

But nothing on heaven or earth will deter this film from irrationally, non-believably reconciling Screechy with Dave – because what God has bound together is supposedly Not Easily Broken. And the black christian folk cheer at the screen – and go home to their listless, loveless marriages…