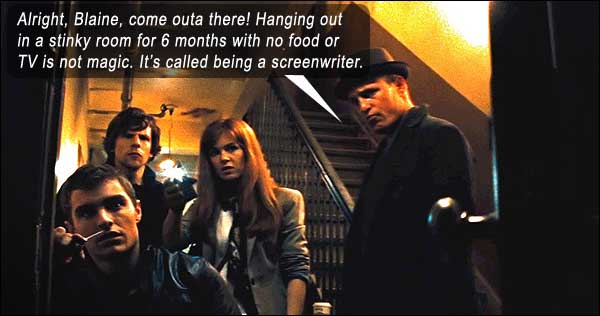 The closer you look, the less you’ll care…

Magician J. Daniel Atlas has a slogan: “The closer you look – the less you’ll see.” Uh, no, I’m actually seeing right into your cliché-riddled screenplay, and your swooping camera moves to misdirect me means that you know that I know what you don’t want me to know…

Four smug magicians use their talents to pull heists and give the money to the less fortunate, like modern day Robin Hoods. They’re young, sexy and dangerous. And too smug for their own sleight of hand.

With slick, kinetic direction (by Louis Leterrier), wasted on conceited characters that are aching for a bitchslap, the magician heist dramedy NOW YOU SEE ME is alternately very entertaining and very irritating. As with any heist movie, much of the heist action is kept from our prying eyes until it can be told in flashback as a “cheat” rather than a smart reveal, like sucking on the teat of the OCEAN’S movies.

Jesse Eisenberg is illusionist Atlas (now exploiting that ice-cool mercenary he found with his Zuckerberg), leading a quartet of magicians brought together by a mysterious magic guru called The Eye, who is the mythic leader of the cult of the same name. Woody Harrelson is mentalist (aka “mind reader”) Merritt McKinney, Isla Fisher is escapist Henley Reeves, and Dave Franco is small-time hustler Jack Wilder. All four desire admittance into that exclusive magic club The Eye, and are willing to follow any enigmatic directives to gain it. You know the beats: they’re all slipped a card to be at a certain place at a certain time, where more mysterious directives are placed before them, which they will blindly follow because apparently, and ironically, they’re gullible idiots.

Atlas finds his card just before sex with a groupie. As he kicks her out, promising to call, she wails, “You don’t have my number.” His reply, “I’m magic. I’ll find you.” He doesn’t say, “I’m a magician” or “I’m magical.” He says “magic.” As a noun. That’s so funny!

Each of the four have some damaged past, and only in uniting – begrudgingly at first – do they find overwhelming success, as a Vegas act called The Four Horsemen. Michael Caine is Arthur Tressler, who funds the Horsemen, and is taken for a horsey ride when the magicians turn on him for owning an insurance company that doesn’t pay its claims. (One would think he’d know better after warning us of The Turn in THE PRESTIGE). And Morgan Freeman, smugly smirking in the middle background as former magician Thaddeus Bradley, is a James Randi-type skeptic who cannot quite figure the Horsemen, except that he’s having a smirking good time watching them make asshats of everyone trying to catch them. You’d think that two of Batman’s pals would know better.

Ruffled Mark Ruffalo is the lead detective tailing the Horsemen, with the boy-model name of Dylan Rhodes, with a smokin’ hot Interpol detective in tow – Mélanie Laurent (Shoshanna from INGLOURIOUS BASTERDS) – who is only here for eye candy, exposition and forced romantic resolution. For coolness, Michael Kelly (Frank Underwood’s “Al Neary” in HOUSE OF CARDS) is Dylan’s partner.

Shades of THE ILLUSIONIST and THE PRESTIGE and any Michael Bay movie where the tracking cameras hijack the action. At first, we are intrigued by The Pledge (the premise of what is going to transpire in the realm of misdirection), and we are always taken aback at The Turn, but our interest soon wanes when The Prestige of each act reveals results too impossible to achieve without REAL magic, the insufferable Harry Potter kind. During one show, Henley swooshes open a big scarf, and we realize – it is CGI, as it swooshes around against the laws of physics. Why? I doubt the professional scarf-twirler was out of your budget as a practical effect. You people are just hooked on bullshit for the sake of it.

Ironically, in cheating their own audience, writers Ed Solomon, Boaz Yakin and Edward Ricourt spoil the illusion of the movie itself. For example, to heist an armored car, we are told the magicians are already inside it. Well… how’d they get there? Is it that easy to build a fake floor in an armored van? To heist a vault in faraway Paris, we are told there is an exact replica of the Paris vault under the stage. Well… who built this? Are the Horsemen master contractors as well? (By the way, the French bank director whom they heist – Jose Garcia – is the French Robert Downey Jr.)

How is Wilder playing with a deck of cards in the interrogation room? (You mean they removed all his personal belongings when they arrested him, and let him keep a deck of cards?) How did Atlas have his phone on him in the interrogation room, to be able to switch with the boy-band-named Dylan Rhodes? (Again, they frisked him and said, “Okay, you can keep the phone”?) And Rhodes only realizes his phone has been switched days after the fact, and only because the phone screen glitches. But anyone would know in an INSTANT if their phone was switched, the moment they tried to use it. Do I even need to explain why? A dummy phone contains none of your personalization or history. Later, we discover a logical reason why the detective didn’t realize his phone had been switched, but then we look back at the moment he “realized” and it becomes even MORE of a pointless plot point.

Like its subject matter, NOW YOU SEE ME is fast-paced because it needs to be, to misdirect, and make us think it’s doing something interesting while really doing something sneaky. Only for the gullible.