The Number of the Least.

It just don’t add up! 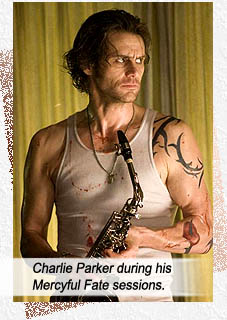 When dogcatcher Walter Sparrow (Jim Carrey) reads a mysterious book called The Number 23, he begins to realize how much the number 23 figures in his life, from his birth date, first date, marriage date, etc. popping up everywhere he looks. Of course, when you arrive at 23 through a complex set of equations pulled from your nether regions, it’s easy to make it add up to something portentous.

Yet this psychological thriller is an entertaining diversion, moving at a pace that prevents us from realizing the intelligence level of numerologists allows for equations like 2+3=23.

Another extraordinary performance from Carrey, playing more than one character again (his real-life persona who is slowly unraveling, and his delirium fantasy called Fingerling, in total control of his Clive Owen longcoat). Virginia Madsen plays Carrey’s wife and scary Danny Huston plays a psychologist friend. Both of them turn up as analogues in Walter Sparrow’s deliriums.

THE NUMBER 23 made me realize all the uncanny coincidences in MY life and the 23-conspiracy that surrounds it: did you know that every month has at least 23 days in it?; or that the English alphabet has more than 23 letters?; and 23 was the number of times I called the Numerologists Hotline to warn them I was coming over to slap someone. And 23 is the number of more important things I could be doing right now.

It all adds up!