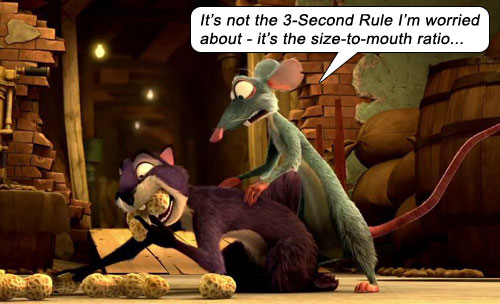 A group of woodland creatures tries to infiltrate a nut shop and heist its nuts for the winter after their supply in the park is accidentally blown up.

Uncute, unlovable animal characters populate THE NUT JOB, an animated feature that aims for excitement, romance and danger and never pulls off any of it as successfully as the uncute unlovable characters pull off the heist.

Will Arnett (THE LEGO MOVIE) voices Surly the squirrel, a loner who only fends for himself (with the aid of a voiceless RATATOUILLE-looking rat), rather than band with the park creatures, led by Raccoon (Liam Neeson, TAKEN 2), in their quest for sustenance. “NUT JOB” is a double entendre that references the heist these creatures will pull and the fact that Surly is supposedly nutty for believing he can pull the job without the aid of his squirrel peers. (Message incoming!) There is also a subplot of thieves using the nut shop as a hideout while they plot to heist a bank.

Brendan Fraser (FURRY VENGEANCE) voices Grayson, a squirrel who believes himself brave and heroic and imagines some kind of hero-framing every time he chest-bursts onscreen; a role which would have been funny in the hands of better writers and directors. He vies for the hand of female squirrel Andie (Katherine Heigl, ONE FOR THE MONEY), who shuts down his overtures because – chick empowerment? Or something. I don’t understand: he’s the biggest, most virile male squirrel in the park, her perfect mating partner to sire strong offspring, but I suppose nature doesn’t matter to people who don’t understand evolution, or screenwriting. She’s saving herself for… uh, that stringy Surly who skulks around the periphery of the park selfishly hoarding nuts for himself and not sharing. Because… uh, character arc? This is the underlying problem with this movie. Not much makes sense.

A Gulfstream production, written by Lorne Cameron and Peter Lepeniotis, and directed by Lepeniotis (his second feature), it is hard to put our finger on exactly why this cartoon is so flat, patchy and disjointed compared to your average Pixar masterpiece, but a major kneecapping might be in how NUT JOB handles its interrelationships between the main characters –  something which Pixar effortlessly pulls off with unbounded poignancy. There is romantic tension left unresolved between the two lead squirrels (Surly and Andie), something which seemed to be building to a climax; further, when Surly decides to remain a loner at the end, it also means his selfish arc is not reconciled – he seemed a distasteful character for much of the story and now we see he still is.

Stephen Lang (AVATAR) is the Boss of the human thieves, planning to blow a hole in the bank. They don’t really care about the nuts in the shop, so when Surly sneaks around trying to steal them, digging a tunnel from the nut shop to the park, or conveyor-belting the nuts out to the street, there really is nothing at stake for either of these characters. They don’t desire the same thing and are not fighting over it; each can exist in his own throughline and not affect the other. Yet they keep butting heads. Why? Boss owns a pug dog named Precious, voiced by Maya Rudolph (oh, so they mean Precious, Based on the novel ‘Push’ by Sapphire). Another careless plot device, as this dog (with a face just barely better-looking than Rudolph’s) starts out as just a barking animal, and suddenly starts to talk to the squirrels when the script meets a dead end and they still have 40 more pages to fill.

In response to Andie asking the park animals to give Surly a chance to prove himself, Mole (Jeff Dunham) protests in anger, “The day Surly saves this park is the day nuts rain from the skies!” Hmm, bank explosives, tunnel to the park, inept bank robbers and woodland creatures in a farcical chase – we can see the explosive climax telegraphed a mile away.

Raccoon’s dead-eyed evil little red bird is the only funny thing in the movie.

As Raccoon, Neeson’s voice is the only recognizable, regal voice that befits his hardnosed leadership role. Everyone else is unrecognizable, which leads to that constant question in modern animated features: Why put talented voice actors out of work for marquee names? Yes, marquee names pull in more viewers, but the demo for this film doesn’t care. The studios counter with, But their parents are taking them – they care. We counter with: a marquee name’s salary could be put to better use promoting the film. It would then bring in a better profit-to-expense ratio. Marketers don’t care. It’s not about the long term. It’s about short-sightedness.

Brendan Fraser is a kiddie Hollywood draw, and he happens to be a good voice actor as well. Jeff Dunham is a puppeteer, who does do voices, so he’s got a pass as well. But Katherine Heigl is only a draw for adult males when she’s onscreen doing her usual tits-and-ass performance. Here, she’s not onscreen, so we can only hear her mouth flapping (which may or may not be putting it to its best use) so why pay her outrageous Hollywood salary when a talented, seasoned voice actress could have done this job much more effectively, talent-wise and cost-wise?

The song Gangnam Style closes the movie with all the cartoon characters dancing to it, including a cartoon of Psy, because – shameless marketing crap that has nothing to do with anything.

Nuts raining from the skies. Isn’t that exactly how this movie feels on our heads?

2 Comments on “THE NUT JOB”