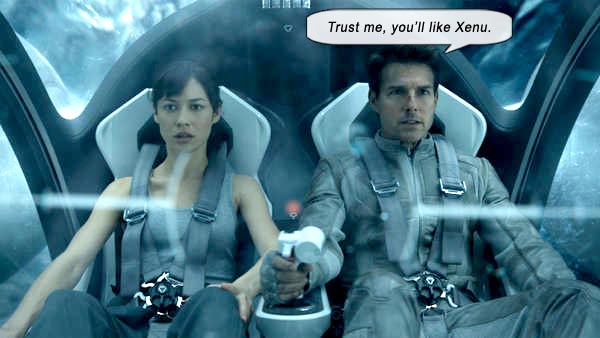 Oblivious to its progenitors?

Up here in space / I’m looking down on you.
My lasers trace / Everything you do.
You think you’ve private lives – think nothing of the kind.
There is no true escape – I’m watching all the time.
I’m made of metal
My circuits gleam.
I am perpetual
I keep the country clean.
— Judas Priest, Electric Eye.

Earth 2077. After the alien apocalypse, all that is left is the skyscraper-high rubble, city-sized hovering hydro-machines reclaiming Earth’s water, an ex-marine maintaining the drones that protect the hydro-machines, and Morgan Freeman’s Voiceover.

Tom Cruise and Morgan Freeman star in the futuristic action thriller OBLIVION, a movie suffering from a dichotomy of originality and plagiarism, which will juggle your emotions from feral love to rolling-eyed dismissal. Seamless efx, created with ingenious thought and loving care, cannon into our visual cortexes (the Empire State poking out of mountainous debris, Cruise’s hi-tech bubble-plane, the cute spherical drones), coupled with an onslaught of plot points that we’ve Déjà vu’d in a thousand other movies (from TOTAL RECALL, to BLADE RUNNER, 2001: A SPACE ODYSSEY, MINORITY REPORT, MOON, et al).

Cruise is Jack Harper, ex-marine, janitor, action man, living with a woman we would be more inclined to call a “mate” than a wife (Andrea Riseborough) in a clinical sky-rise abode on an isolated mountaintop, with Earth’s population having evacuated to the Saturnian moon Titan. Every morning, Jack ventures out in his futuristic Top Gun to maintain the drones, while Wife monitors him from a computer desk. Most evenings he returns beaten and bloodied from misadventures with the Scavengers (“Scavs”) on the planet surface, who keep trying to kill him because he reminds them of that annoying Tom Cruise fella. Wife then dutifully has The Sex with him. Day out, day in. Repeat.

Jack tells us his memory has been wiped, yet he’s constantly dreaming of a woman (Olga Kurylenko) meeting him at the Empire State Building, all loving smiles and looking like Catherine Zeta-Jones. He also goes “off-grid” occasionally – to the chagrin of Wife – to visit an oasis he has cultivated seemingly for years, a lush green valley with a log cabin containing his collection of old world paraphernalia (records, books, rustic implements), where he can listen to Led Zeppelin and Procol Harum in peace, wearing a baseball cap to remind him of past times, and a flannel shirt over his fruity Lost In Space duds.

Meanwhile, Wife keeps up appearances to their command post, a stern woman (Melissa Leo) on a monitor, who constantly asks Wife, “Are you an Effective Team?” in that overly-friendly manner that signifies a negative answer will elicit dire consequences.

Then one day, the Scavs capture Jack. And everything gets pear-shaped. 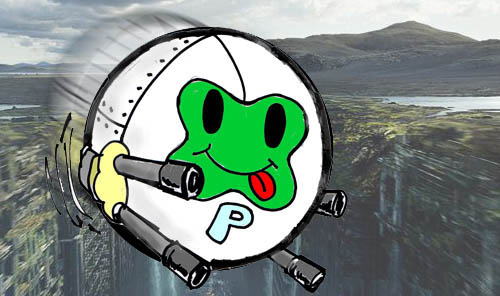 OBLIVION is a double-edged sword: while the stunning visuals disarm us, writer-director Joseph Kosinski and writers Karl Gajdusek and Michael DeBruyn try to slip under our noses every trope from as many science fiction films as possible. I wouldn’t go so far as to call this unoriginal; more like a new generation of filmmakers introducing these tropes to a new generation of filmgoers, who may be unaware of this film’s progenitors, yet who need no explanations of these tropes that have seeped into cultural consciousness – the Last Caretaker On Earth, the Underground Mutants, Cloned Worker-Bees, Friendly Technology Turning On You, etc.

The young movie maniacs who marvel at this film may not be familiar enough with filmic history yet, but they are on another plane of sophistication regarding techno-vernacular. So we get no superfluous exposition-dialogue on Jack’s wondrous bubble-plane, his collapsible bike, or the drones. And when Jack is suddenly looking at a clone, we don’t get explanation on who this second Scientologist is; matter of fact, the word “clone” is never once used in the movie. OBLIVION is for the generation who take CGI for granted, as if it was always here (the decimated Earthscape, the skyline of New York poking through skyscraper-piles of dirt, the unique triangular hydro-machines); for those who take for granted unseen connectivity (even though Jack looks like he’s talking to himself like a crazy person, we know he has an in-ear com device), constant video surveillance (grainy footage that looks like grocery-store-cams is understood to be mounted security-cams), and biological concepts foreign to our ancestors (hypersleep, replicating DNA). OBLIVION is for this new generation, catering to their especial modernity.

The initial trailers are – thankfully – ambiguous, and OBLIVION’s storyline delivers surprise after surprise. But though we are led to believe the Scavs are mutated human baddies, when Jack is chained down and meets the Scav leader, a match lights beside a grizzled face and – hey, it’s Morgan Freeman! How bad can this possibly be? Turns out, worse than we think, as Morgan is Mr. Exposition and cannot stop flapping his yap about How It All Began.

The Scavs are all attired in appropriate apocalyptic rags (a la  WATERWORLD, THE BOOK OF ELI, THE ROAD, THE POSTMAN, and of course, the granddaddy of this ilk, MAD MAX) – except for Morgan Freeman; he’s sporting the Slimming Black Apocalyptic Rags – Lord knows, he’s packed on a few pounds since going Shirtless-Kirk in UNFORGIVEN.

When Jack rescues Mini-Zeta – literally, the woman of his dreams – from a capsule where she was in hypersleep for 60 years, the mystery deepens, the plot thickens, and the Wife darkens.

And this premise is the most interesting conundrum in OBLIVION: what might happen if hypersleep becomes a reality, and people hibernate past their lifetimes and loved ones? Then, to discover one of your loved ones in the future – as a clone? Would love still be “real”?

“If we have souls, they’re made of the love we share. Undimmed by time, unbound by death…” Though Jack’s ponderings may sound cheesy-cheesy-lemon-squeezy out of context, in this case, he’s got some kind of point. Because clones, in theory at least, retain the memories of the original. And what are we but a conglom of our memories? This aspect being approached “realistically” kept the movie on this side of sensible science fiction. “I know I’m not him, but… his memories are with me…”

Jack somehow remembers the last Superbowl in 2017, and recites it play-by-play nostalgically– waitaminute! The alien holocaust is in four years? I’d better call my Allstate agent…

The Younger-Double Bubble.
As Cousin Oliver was brought in to rejuvenate the youth element in THE BRADY BUNCH, Olga Kurylenko is the “Cousin Oliver” here; the woman whose “type” replaces the older Zeta-Jones in the film world.

I’m not saying the filmmakers originally wanted Zeta for this role, or that casting agents  aggressively seek to replace their A-List clients (–maybe they do?) but when a younger, hotter A-List “type” is discovered – like Mila Kunis for Angelina Jolie – these types will unassumingly start snatching up the roles of their older hausfraus. There are no metrics to prove this, but if you doubt me, start following the careers of perfect-featured Parker Posey and her doppelganger 20 years younger, Bojana Novakovic. See what happens…

After what I’ve just pointed out, ain’t it ironic then, that this movie features clones?