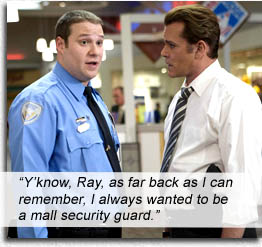 OBSERVE AND REPORT doesn’t totally suck. But I can see how people might think it does. If star Seth Rogen‘s career escalates, it might even turn into a cult fave. If writer-director Jody Hill (THE FOOT FIST WAY, 2008) can fine-tune his meandering storytelling style in the future with a bigger hit, it will.

This comedy is so black, it turns gray – walks that indecisive line between drama and comedy, with Seth Rogen pulling it towards big-dumb-galoot comedy and the script (much like Hill’s FOOT FIST WAY) tripping into self-realization drama.

Ronnie Barnhardt (Rogen) is a mall security guard, in love from afar with a cosmetics counter girl, Brandi (Anna Faris). He sees an opportunity to win Brandi’s heart by nabbing an elusive mall flasher after Brandi is flashed and traumatized one day.

On their first date, we realize how screwed up both Brandi and Ronnie are, as Ronnie reveals he is on bipolar medication, which Brandi takes off him and starts pill-popping like candy, chasing with tequila shots. We also see how psychologically dependent Ronnie must be to pine after a drug-addled alcoholic with baggage enough to fill a 747 cargo bay. He tells her he “accepts her” and kisses her vomit-tainted mouth.

Ray Liotta lost a bet with his agent to appear in this film; he’s a police detective who investigates the crimes at the mall, and is initially there to threaten Ronnie’s masculinity, but that subplot is lost quickly as he degenerates into just a hateful, mean-spirited cop.

We could speculate on how Hill sabotages his own movie in writing lead characters so unlikable, but in the hands of a better writer, these characters might have shone – there are so many funny moments, that someone like Judd Apatow might have forged OBSERVE AND REPORT into a cohesive comedic hammer: the alcoholic mother, the born-again virgin, Michael Peña‘s thug-lisping security guard, the gay cosmetics guy…

An example of Hill not realizing what he’s doing: he shows Brandi driving to work with Super Freek (by Amanda Blank) blaring. Some of the lyrics: “…rough sex…pussy made of gold… grabbing on his dick… I’ll show him mine if he shows me his…”; Brandi exits her car with a skirt so short we forget our breakfast – then she is confronted by the flasher and is traumatized so deeply that “I can’t walk, obviously!” Would be great satire or hyperbole – if it was satire or hyperbole – but Hill has depicted an exact representation of incognizant society today. Everyone is out to attract everyone else, not even realizing they are (push-up bras, high heels, fake lips, eyelashes, tits, pecs, Botox, the Lap Band) – then deny the attractees access! 12-year-olds steal their mother’s makeup and fishnets, not knowing why; parents force their daughters into Little Miss Pageants, making them gyrate and grind as if they know rough sex at age 6. In other words, the same society that exposes itself to sexuality SPAWNS the flasher exposing himself to society. And all the Brandis of the world have the audacity to whine about it.

Danny (“Thug life!”) McBride is hilarious in a cameo as a gangbanger – but only because he is Danny McBride. If this role were transplanted exactly as written and performed as a crime drama, it would sit just as well.

Collette Wolfe, though achingly beautiful, shows off some startling acting talent, as Ronnie’s unnoticed love interest (‘unnoticed’ because she sports a broken leg and keeps her flowing red locks up in her cap – note how Hill avoids the cliché of glasses and hair pulled back?) (And yes, my comment is sexist: beautiful women never display much actual “acting” – because they don’t have to – no one’s going to take them seriously anyway. It ain’t me – it’s the SYSTEM!)

Ronnie does become more likeable as the story resolves, but there is a lot of wasted celluloid getting him there. He is shown to be a crack shot and fearless fighter (taking out five gangbangers singlehandedly with just a nightstick), so we are not surprised when Ronnie beats up a long line of cops who come at him one at a time ineptly, like in a karate movie – until Ray Liotta overpowers him one-on-one. There is no point to this sequence – no expertise on display (as in ENTER THE DRAGON) or any humor (as in any Jackie Chan encounter) – it’s just Ronnie beating cops.

The inclusion of two rare Queen tracks as source music keeps this movie from sinking lower than its five-cucumber rating – It’s Late (from News of The World) and The Hero (a deep-cut from Flash Gordon).

OBSERVE AND REPORT embodies Ronnie’s view of his life: There’s gotta be something better than just not totally sucking.