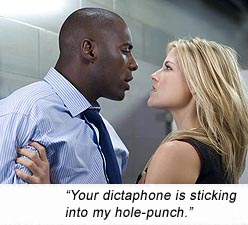 A married man’s secretary comes between him and his wife. Well, she doesn’t really come between them, so much as try to seduce him with small talk and dirty martinis, get almost naked in front of him, almost have sex with him in a toilet stall and gives him a Crudo CD. That’s hot illicit sex PG-13 style.

In OBSESSED, Beyoncé Knowles is Sharon, the married woman (trying to convince us she’s a mediocre actress rather than a mediocre singer), Idris Elba is her husband Derek, whose hot black body is obsessively lusted over by tight white secretary Lisa (Ali Larter, flat-chested yet endowed with the kind of beauty nocturnal emissions are made of).

First two acts are interesting enough, with all Lisa’s advances being turned down by Derek, including the old trenchcoat-over-underwear gambit, where Lisa forces herself into Derek’s car and opens her trenchcoat, “exposing” herself, her granny panties almost distracting us from her bra, which would be considered skimpy, yet doing a substantial job of suffocating her miniscule A-cup ta-tas. (It always makes me laugh when women with anything less than C-cups think their breasts are worth looking at and therefore keep them hidden because of societal mores. What are you hiding, baby? You look like a man, man!)

Supporting cast includes Jerry O’Connell as the vanilla friend, Richard Ruccolo as the fruity assistant, Christine Lahti as the old detective that serves no plot, Bruce McGill as the boring office exec. Idris Elba’s acting is the most authentic here; his reactions are believable, yet least in anyone’s mind are the real world ramifications of a woman trying to seduce a man in the workplace, being rejected then suing for sexual harassment – and a thousand other realistic avenues the movie might have taken; would’ve saved a lot of screentime had Derek simply reported Lisa’s inappropriate behavior before she degenerated to the breaking-and-entering-and-kidnapping phase of her obsession. I especially like the realism of Lisa slipping Derek a rufie then NOT having sex with him.

After the terrifying circumstances of PLAY MISTY FOR ME, FATAL ATTRACTION, DISCLOSURE, writer David Loughery and director Steve Shill have crafted OBSESSED as if they’ve never known the embrace of a woman, let alone been stalked by one.

Last act is B-movie heaven, degenerating into girly catfighting between Sharon and Lisa in place of plot or sense; still a waste of time if no one gets their A-ta-tas out or sings mediocrely to electronic beats with guest artists. Lisa is led to the attic where she falls through a soft part of the roof, onto a chandelier and then onto a glass table.

If you ever get the chance to re-watch this movie (as if once wasn’t enough), laugh out loud at the hamhanded foreshadowing in the first scenes, as we see the happy couple buy a new home and set up all the gags for the climactic catfight: in slomo, let’s put the glass table right under the chandelier, which is right under the soft part of the roof that shouldn’t be stepped on up in the attic.

Of course, that’s contingent on whether you can stay awake long enough to actually get to the ending. I’d rather be asleep and nocturnally emissioning.